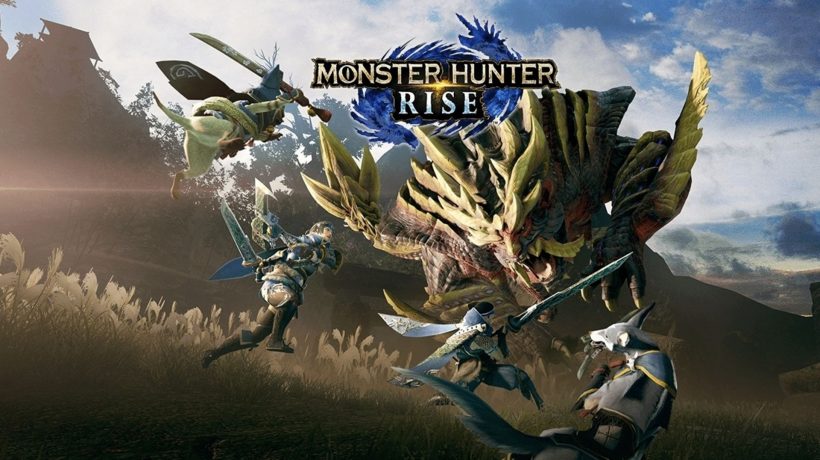 As I strut through a lava cavern, uncovering a beautiful blue bioluminescent cave, I see a huge, skulking Rathalos reflected in the light. My armour is made from the skin of a beast I’ve already slain and the dual blades I unsheathe are decorated with the fur of another. Dashing forward on my Palamute, I launch into the air before setting loose my Wirebug in a flash of bright light, trapping the dragon-like leviathan and pulling on the wires to make it bow to my whim. With it under my control, I pull it out into the open only to attack a wandering Magnamalo, unleash a huge blow damaging both and then careen upwards sharply to recover before I attack again. Folks, Monster Hunter Rise is awesome.

For the uninitiated, Monster Hunter is a twenty-year-old Japanese series that does exactly what it says on the tin. You’re a hunter tasked with finding and defeating a wide variety of intimidating monsters on different missions, from which you will then be able to use parts to create unique armour sets and one of fourteen different weapon types. These help you grow stronger, and so you will have the capability to take on bigger and badder foes as the game goes on. Though I love the series, it often felt like more work than necessary, thanks to cumbersome features or slow and deliberate combat. However, this entry feels like it’s never been smarter, swifter, or more appreciative of your time.

From the first moments, this game is quicker than previous Nintendo entries. Loading times have been dramatically improved – we are talking mere seconds here – yet this game is one of the best looking on the platform. As the first title on Switch to use the custom RE Engine, there is some real sorcery behind the scenes at work here with advanced lighting effects, delicate foliage and beautiful characters (and monsters) brought to life in slimy, scaly and sweaty detail.

Monster Hunter Rise brings some of the smart improvements from previous games like the radial dial, endemic life, the ability to ride monsters and huge interconnected open levels. But the glaring new addition is something that affects almost every part of gameplay, and that is the Wirebug: A versatile item designed to help you move vertically, while also adding some more vicious attacks to your arsenal. While exploring the open-plan levels, you can aim and fire your Wirebug to traverse upwards and scale cliffs to new heights. It helps you to find shortcuts, discover endemic life and survey the land as you hunt your prey.

More than just a means of traversal, the Wirebug also helps you in battle by adding new Silkbind techniques. Here you can use a portion of your Wirebug gauge to attack each foe with a variety of moves based on the weapon you are using. Some of them are acrobatic leaps onto foes, some of them counters, even a lasso is among this throng of new, useful moves. It adds a smart new layer of complexity to the game without adding too much in the way of things to remember or weapons to master. You can continue playing with your trusty Switch Axe as you want, but you might be surprised at some of the new moves on offer here, however you play.

Along with the ability to set Rampage Skills, Switch Skills and the many different types of weapons, combat here feels like it’s adding some interesting layers to what already worked brilliantly, offering fans new ways to personalise their load-out to suit their battle style. I had so much fun with the Hunting Horn this time after I enjoyed the Silkbind ability it offered, so I feel the options help both to reward different play styles and encourage experimentation.

On top of combat improvements are several returning or new features that all come together to make this the quickest and smartest Monster Hunter game ever. Traversing the many heights of each level becomes a joy when there’s endemic life at every step, offering power-ups and even Kamura points to spend in town. There are secret spots to uncover new campsites, which when fully unlocked you can warp to quickly to make future hunts easier. There are even Great Wirebugs, which when found among lilies will unlock a quick shortcut that’ll thrust you to a faraway spot in an instant. The beautiful, vast levels on display here were already interesting to explore just to find new shortcuts and scenic views, but Capcom has littered them with fun and meaningful things to discover at every corner.

Another fantastic addition is your trusty pal the canine-like Palamute, joining the long-standing series buddy the Palico to assist you in battles with different buffs and attacks. The Palamute, however, is big enough for you to ride and makes sprinting through the larger levels a joy. Whereas previously a large level was intimidating thanks to a constantly shrinking stamina meter, riding a Palamute doesn’t faze you and you can use that time to sharpen your weapons, drink potions and more. It’s one of the many smart decisions that mean you spend more of your time doing exactly what you want, hunting monsters.

Speaking of which, there’s plenty of new beasties to bash here, and many take the Japanese influence of Rise and run with it. You have the giant green sumo wrestler Tetranadon, who closely resembles the Japanese Yokai and water-dwelling demon, the Kappa, the sinister-looking snow beast Goss Harag, whose fangs and ogre-like features resemble the Namahage yokai, and even Somnacanth, based on the Japanese interpretation of mermaids in folklore. Finally, Magnamalo is the intimidating cover star, and he lives up to his menacing appearance. It’s a gruesome bunch with fascinating origins, and after the success of World it’s nice to see the developers do something closer to their own culture again. Not to mention the many more leviathans introduced, though that’s not something we can talk about here. With a focus on mobility and status effects, the new monsters are a great match for your improved skill set.

Now along with classic missions you also have the new ‘Rampage’ mode, an approximation of a horde mode and a tower defence where you zip around a fortress installing weapons to counter a swarm of monsters, hoping your defences last. This new mode is a blast, really ramping up the action and demanding some quick decision making when beasts would wipe out your well-placed traps. It’s a great way to net a variety of parts and it’s really fun with a couple of friends online as well, demanding some communication and strategy to react properly to each new wave. As with many Switch games I wish communication options were better, but I can hardly hold that against the game itself when it’s mainly a Nintendo problem.

The main multiplayer is also just as good as ever, streamlined slightly with the courier in your village allowing you to join or host lobbies fairly easily. You can choose to create private lobbies with codes or simply open up your hunt for strangers to jump in. It all works flawlessly and didn’t affect visuals or framerate in any of our tests, so don’t worry if you played the demo and had some issues. Honestly, while I’ve lightly touched on it, I want to further stress just how beautiful this game is in motion, and how seamlessly it all works.

It’s hard to break down all the things about Monster Hunter Rise that impressed me, because even after rolling credits, 40 hours and several multiplayer matches, I’ve barely begun to scratch the surface. I’ve barely touched on other great elements, like the Buddy Dojo or Meowcenaries to help you get items, the fantastic new armour sets including ones for your Palamute and the Cahoot, or the owl you can dress up who helps you uncover things and take photos.

Overall, looking at the great new additions to gameplay, the fantastic new monsters and the further expansion of the already thrilling combat, this is undeniably the best Monster Hunter game ever to grace a Nintendo platform. Rise has ascended the list of my favourite Switch games with ease, and has perfected an already winning formula to make an incredibly impressive and satisfying action game. Hunters, have fun.

Monster Hunter Rise is a success built on years of gradual improvements, but it also takes some giant Wirebug leaps forward to deliver an unforgettable and endlessly thrilling adventure. This is a new contender for the best game on Switch.