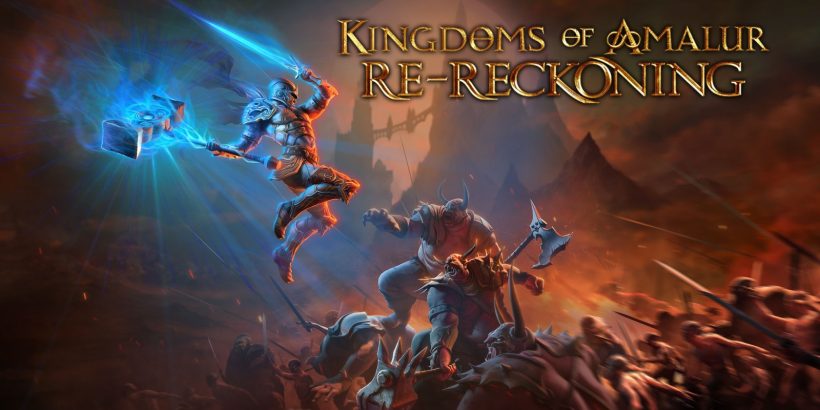 We had a certain period in gaming development where most projects could be divided into two distinct categories. They were either a blockbuster AAA or a small indie title.

However, now and again, there were games that didn’t really fit into these categories. Projects that had huge ambition, aiming to create a gargantuan epic experience, but without the proper budget, staff or time to achieve such greatness. When it was first released in 2012, you could say that Kingdoms of Amalur: Reckoning was a perfect example of this kind of mid-tier game. Yet these constraints become even clearer now that we can play the game again on its Re-Reckoning remastered form.

The rocky development history of Kingdoms of Amalur helps to put into perspective how some of its best aspects and worst drawbacks came to be. Conceptualized as a multi-part MMORPG, the game had to be adapted to a single-player action-based RPG after the project changed teams. The final product, then, ended up telling a narrative that is akin to other western RPGs you may have experienced, such as The Elder Scrolls or Fable. Here, you are one of those “blank heroes” that can be shaped as you please. The world is under war, facing the threat of the Tuatha, a clan of immortal Fae that decided to cleanse the world of humans. As in every narrative of the kind, a twist of fate turned a nobody like yourself into the one and only hope, and now you need to explore the world trying to deal with everything the best way you can, which is by becoming an errant person.

If you really enjoy a western RPG, Re-Reckoning may be a good enough option, as it offers literally dozens of hours of expansive content. Unfortunately, though, most of that is composed of uninspired and repetitive quests that you would expect from a standard MMORPG. While it offers an extensive lore, with surprisingly complex world building that involves many different races, kingdoms, and factions, the main way to delve into all that is by completing samey quests. Go there and kill those monsters. Take this to that person on the other side of the map. Explore this corridor-like dungeon. The most elaborate quests always come as a nice surprise, but they are only a handful in an ocean of repetitiveness.

Where Re-Reckoning shines the most is in its character customization and combat elements. Before starting the game, you can change many different visual aspects of your character, including race, gender, and your overall look. The best part, though, lies in how you can evolve your character along three different skill paths. If you wish to overcome your enemies via brute force, you can invest in the Might skills. For a stealth approach, you can choose Finesse, but you can also fight from afar with the powerful spells from the Sorcery skill tree. Each path offers a different approach to combat, but they can also be mixed as you wish, so you can really build your character as you please, even as a multi-class hero.

Re-Reckoning’s combat is very focused on action, and happens in real-time. Attacking, defending and dodging compose the most basic inputs, which are shared between every class. However, depending on your arsenal, each combat encounter will take place differently. For starters, each weapon provides a very different move set, with specific timings that can be combined in extensive combos. By allowing you to equip two different weapons, and setting each to a different button, Re-Reckoning manages to expand an initially simple combat system, which gets even more interesting when you start to mix in spells and skills with your combos.

In addition to your health and mana bar, Kingdoms of Amalur also comes with the titular reckoning system. This is a separate bar that fills in depending on your performance during the combat. Once it is complete, you can choose the best moment to activate the reckoning mode, which slows time all around you for a short period. While reckoning mode lasts, you can dispatch as many enemies as possible, ending the segment with a fancy finishing move, which is reminiscent of a light version of Mortal Kombat’s fatalities or God of War’s finishing moves. In addition to providing a short visual show, getting the quick timing of this finishing move right adds a multiplier to the experience you’re getting with the kills. Win-win situation.

As much as Re-Reckoning is labeled as a remastered version of the original Kingdoms of Amalur, in truth, the game still shows some signs of its age. The game clearly has a fine art direction that provides beautiful sceneries at certain times, but these moments are limited. In general, the scenarios of Re-Reckoning feel and look a bit generic, and this impression is amplified when you consider that many maps aren’t much more than huge corridors connecting important areas.

In the end, Re-Reckoning still has some cool qualities that may put it as a third or fourth option on the roll of western RPGs available on the Nintendo Switch. But only bother with it if you’ve already played better options such as Skyrim and The Witcher 3.

Despite being labeled a remaster, Kingdoms of Amalur: Re-Reckoning shows signs of its age and rocky development history. It has enough qualities to appeal to fans of western RPGs, but only if you’ve already played the better options available.