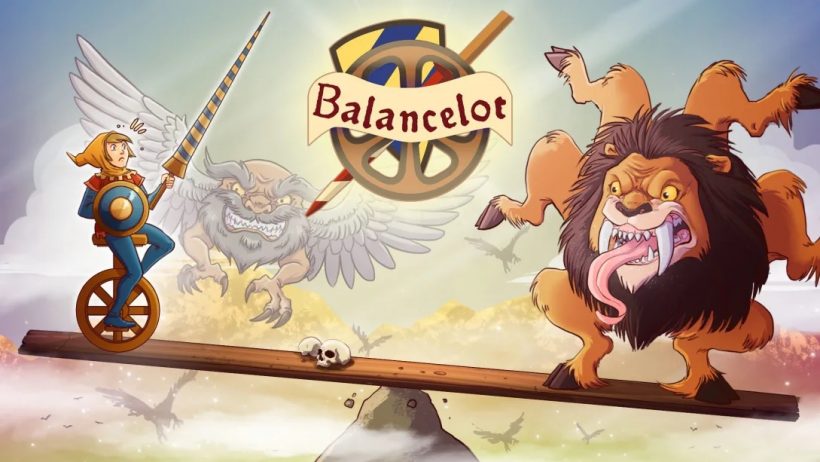 Contrary to what some players may believe, in Balancelot you will balance. A lot. Another thing that you’ll do a lot is die repeatedly, though largely through no fault of your own. That’s because while the idea behind this physics-based puzzler might be sound, in execution this is easily one of the worst games I’ve ever had the dissatisfaction of playing on Nintendo Switch. I don’t say this lightly. Never before in an indie title have I found myself becoming so frustrated so quickly and early on. It was simply impossible to find the fun – no matter how often I tried.

In Balancelot, you adopt the role of a lowly jester-like character called Lance (see what they did there?), who must pick up the mantle of his knightly peers to save the day. How does he do this? By making his way through various dastardly 2D obstacles, jumping, tilting and generally trying to keep balance while traversing many medieval landscapes. Eventually, you’ll unlock other characters as you progress throughout the game’s 50 levels, but the act of doing so always feels like a chore, due to some untrustworthy and purposely awkward physics.

Other games like Octodad and Surgeon Simulator have previously shown that such conceits as clumsy controls and daft motion can work. Where Balancelot differs from those, however, is that it relies heavily on precision, and you always maintaining a good handling over your unicycle. The two shoulder buttons dictate whether you move forward or back, while the left analogue stick determines which side you will tilt. Such an approach seems like it would be intuitive, but it isn’t long until you discover that it really isn’t. Rather, the act of balancing is unwieldy, and always more trouble than it’s actually worth.

Gliding your unicycle over logs, caverns and hills isn’t slippery per se. The problem is that so much is asked of you from the controls already that by the time enemies and moving obstacles are introduced, you’re not quite sure how to act. Even the smallest rock – if positioned unfairly – can cause a lot of issues, forcing your character to lean back more than intended, or bumping you off course to instantly see you fail. I often died upwards of 30 times just in Balancelot’s opening levels, and there’s no tutorial or assist mode present to encourage you to get better.

All this isn’t helped by the lance that your character carries at all times, which I imagine the developer included as a way for you to reorient and stabilise yourself should you fall too far forward. However, more often than not it has the opposite effect, jamming into a wall you were hoping to leap over and forcing you to unnecessarily roll back. I’m fine with a game asking me to be precise, but in Balancelot it feels like the controls and levels have been intentionally designed to counteract any progress you make. Especially when playing in handheld mode, the Switch’s analogue sticks don’t afford you the required amount of accuracy.

Despite a wholesome art style and an intriguing premise, the only types of player I can see enjoying Balancelot are masochists. This is a game that fails the first rule of game design, in my opinion, which is to make the act of playing be enjoyable and fun. You might get a kick out of it if you’re someone who relishes a punishing challenge, yet this does nothing to avoid the sense of defeat you’ll endure once finally overcoming it. Don’t be fooled by the charming aesthetic – Balancelot isn’t for the faint of heart.

Balancelot begs you to be precise but doesn’t give you the tools or means to do so. The idea of being a medieval unicycler shows promise, but ends up being an exercise in just how quickly it can frustrate you.