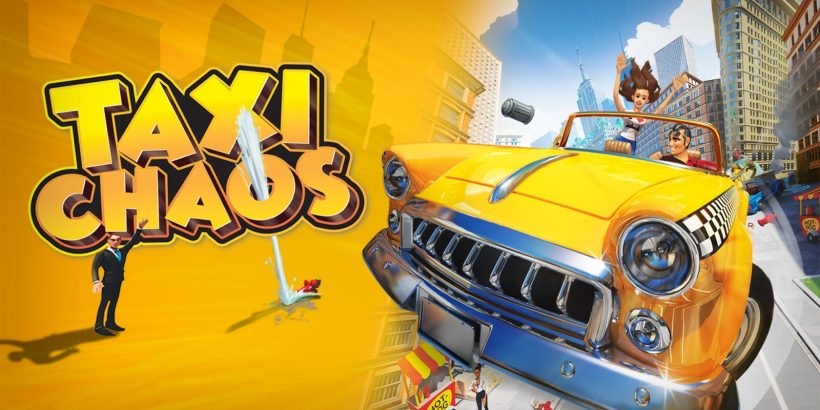 I’m sure we all have memories of being a taxi driver and delivering customers to their destinations as fast as humanly possible for money. I am, of course, referring to Crazy Taxi on the Dreamcast…

Trying to replicate the same feelings we had when we played Crazy Taxi many moons ago, Lion Castle has created Taxi Chaos, giving the much-loved action-arcade game a fresh and modern take. Although they don’t directly say this game is based on Crazy Taxi, you can see that it is from the get-go.

Players pick from a choice of two characters — seasoned cab driver Vinny or influencer Cleo — and drive around NYC (New Yellow City), looking for customers to pick up, racing to get them from point A to point B before the timer runs out. The quicker you ‘deliver’ them, the more money you make. When a customer gets into your cab, a small arrow will point in the direction you must go. I often found this to be inaccurate, though: sometimes it would point in one direction and then quickly point in another. You have 90 seconds to see how much money you can make, after which your shift ends.

You start in the classic taxi cab but can unlock seven more vehicles by reaching certain accomplishments. There’s something quite satisfying about calling a supercar a taxi. You also have three game modes to choose from: Arcade, which is the standard mode; Pro mode, which you need to unlock by getting a four-star rating but, in this mode, you have no visual guidance; and finally, Freeroam mode, which is pretty self-explanatory. I’m sad to say, none of these modes really made the experience worthwhile for me.

The controls are simple, with the only buttons you will be using being ZR and ZL – stop and go. Press these both together and you can boost. The game does have a jump mechanic via the A button, but I didn’t really find myself using this other than to jump over oncoming traffic in my way. It’s supposed to be used to jump up to rooftops and find shortcuts but I just felt that was more effort than what it was worth. I was disappointed at the lack of a drift button, but hey-ho.

The length of the arcade games was an issue for me because they only last 90 seconds-ish (you can add time on top with successful drop-offs). But I found myself very quickly getting bored after a couple of attempts. Only having time to drop off two or three people felt like the game was over before it had even begun.

Let’s talk about the game’s graphics. While they are colourful and vibrant, everything always seems to be a little blurry, almost like I need to put on my glasses to make it look better, and I can’t pinpoint why this is. It didn’t matter whether I was playing in handheld mode or docked, it still looks slightly blurry, and that did bug me. Not to mention that character detail is lacking and facial features are amiss.

New Yellow City is not the city I had hoped it would be, with each street looking extremely similar to the last and with not much going on in it. I didn’t find myself wanting to explore it. There are no defining landmarks to catch your eye or interesting characters to come across along the way. It all felt very underwhelming.

The game’s soundtrack is similarly underwhelming with looped ‘rock’ music that you wouldn’t miss if it wasn’t there. Nothing that you would go away humming and wanting to download later.

Smashing into objects and vehicles was nowhere near the fun I thought it would be. I was expected some Burnout-like destruction scene but instead found myself stopped in my tracks, having to awkwardly reverse and drive off as if nothing has happened.

I did quite enjoy the way the characters interacted with each other when inside the taxi cab. Though conversations can become a little cringy at times, they still gave me a little chuckle every now and again. The voice acting was enjoyable too which was a nice surprise.

Taxi Chaos also features a bunch of achievements to aim for and collect. Though there is no real reward for unlocking them, it’s still a nice feature to have. It’s more for bragging rights, I guess. In addition, there are various collectables to find throughout the world. Again, there’s no reward for collecting them, they’re just there.

“Are you ready for this crazy and chaotic ride?” is the question posed on the game’s store page, and I’m still yet to see any crazy or chaotic rides. It’s more Driving Miss Daisy than Fast and Furious.

I feel like so much more could have been implemented to really make this a ‘fresh and modern take’ on an old school classic and to make it a fuller experience. At this point in time, I don’t believe it to be worth the asking price. I know the developers are planning future updates to improve it and I can only hope it will become the game we all want it to be.

Taxi Chaos sadly misses all the charm and fun Crazy Taxi came with. With poor graphics, simple gameplay and a ridiculous £31.49 price point, it’s hard to recommend this arcade game.