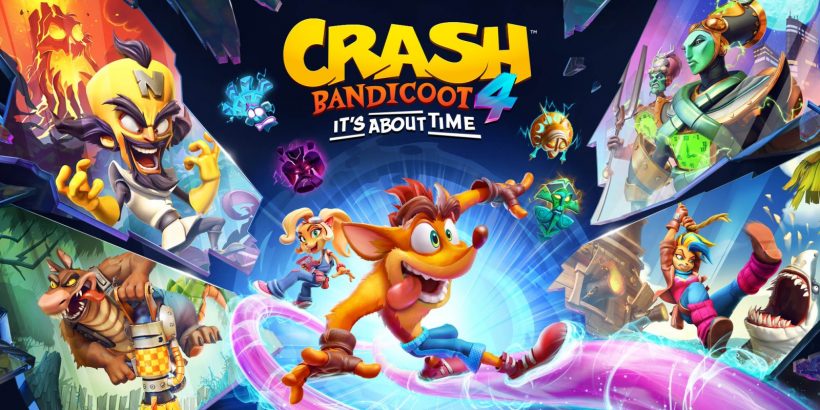 Following the successful return of the manic marsupial in 2017 with the N. Sane Trilogy (as well as his return to the racetrack in Nitro-Fueled), fans have waited eagerly for something totally new, with publisher Activision having proven themselves twice with the relics in Crash’s history.

Toys for Bob have answered the call, with a true sequel to the original Naughty Dog trilogy. Crash Bandicoot 4 both picks up from where the first three games left, and builds on the classic formula, taking it to a new level. It’s bigger, it’s better-looking, it’s harder, and it’s about time we finally got our hands on the Switch version.

From the moment you jump into It’s About Time’s first level, Crash’s movement is instantly familiar, and the gameplay intuitive. His spin attack, slide, and double jump are all as you remember them, and improvements such as a helpful shadow indicating where you’re going to land when platforming make this the best feeling Crash game yet. Attention paid by the developer in retaining core aspects of Crash’s DNA also help to further this instant familiarity, such as the perfectly preserved sound effects of checkpoints, extra lives, and TNT, which bring a wave of nostalgia over you.

It’s About Time tells the story of Crash and Co. having to stop the returning Neo Cortex, N. Trophy and Uka Uka who, after finally escaping imprisonment, have created a Rift Generator that tears the very fabric of time and space. It’s a clever narrative setup that doesn’t take itself seriously, allowing for a ton of inventive and exciting locations to be hopped between throughout levels and worlds, and also for nods to different characters and games from the wider Crash lore, which is nice for fans of the series looking back over the past 25 years.

Aside from the fluent suite of moves in Crash’s arsenal, It’s About Time introduces four quantum masks into the mix, shifting the dynamics of the platforming and getting inventive without resorting to gimmicks or minigame levels. There’s a phase-shifting mask, a gravity-altering mask, a time-stopping mask, and a dark matter mask giving you a whirlwind spin ability. Signature ‘chase’ segments and jetboard areas are still present, but they’re smaller elements in bigger, themed levels, and don’t stick around long enough to make them frustrating.

Crash 4 provides six gems for each stage: three for varying levels of Wumpa fruit earned, one for smashing every box, one for finishing the stage with three deaths or less, and one for finding a hidden gem. With returning Time Trial relics, ‘N. Sanely Perfect’ relics for finishing stages flawlessly, and even a completely new set of gems to collect in ‘N. Verted’ mode — which remixes levels with interesting visual effects and quirks — the game really does wring every ounce of Wumpa juice from each stage. Requiring utter mastery and knowledge to earn true completion, it’s a level of challenge that is certainly not for everyone. Toys for Bob understands what Crash is, and have nailed the rage-inducing gem challenges to a T, but they’re optional and only ancillary to the overall fun.

To add even more variety, It’s About Time features alternate ‘timeline’ stages, in which you get to play as Tawna, Dingodile, and even Cortex himself. Interwoven with the standard levels, these stages play totally differently from the normal spinning, smashing, and sliding. Tawna uses a hookshot to get around, Dingodile uses a vacuum gun to hover slightly and fire TNT barrels at enemies, and Cortex uses his ray gun in order to turn enemies into platforms. Having to play through the same partial stages again can be a bit monotonous, but these levels are a ton of fun as a change of pace from the standard fare. If that wasn’t enough, flashback tapes found throughout the game unlock another series of challenging puzzle mini-levels, reminiscent of the crate-hopping Cortex bonus stages from the original PS1 game.

In terms of Crash’s Switch port specifically, launching alongside the next-gen versions, Toys for Bob have done a stellar job bringing the ambitious Unreal Engine 4 title to the Nintendo platform. While you might be able to have a better experience with the game on other consoles — getting a little bit more from the stunning level designs, visuals and animation — this is in no way a lesser version.

Overall, there’s a strong case to be made for It’s About Time being the best Crash Bandicoot game to date. Toys for Bob have managed to modernise the 90s mascot effectively, while still retaining authenticity with the nostalgic, crate-smashing formula that fans know and love.

As he celebrates his 25th anniversary, Crash Bandicoot in 2021 has a unique platforming identity that stands proudly alongside the greats of the genre. Those new to the series can have a ton of fun with 4’s quirky story, varied levels and unlockable skins, whilst the committed fan can punish themselves with an onslaught of challenges that make up for lost time by almost going overboard. It ticks, or rather smashes, all the right boxes.

While the sharp difficulty spikes and commitment required for completion can be daunting, Crash 4 miraculously succeeds as both a direct successor to the original 90s trilogy, and a modernised reimagining of the franchise. It might be the best Crash game yet.