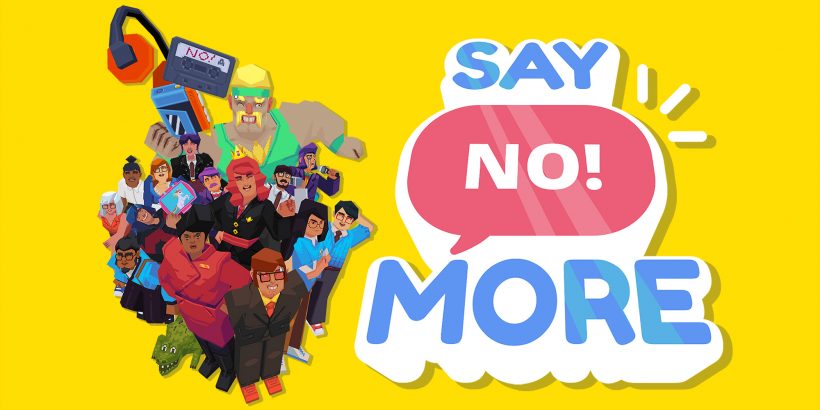 It’s hard to even begin to describe Say No! More, the newest game from publishers Thunderful and the very first game in the NPG (No Playing Game) genre – according to them anyway. In a world where nobody can say no and saying yes to everything is encouraged, businesses are using this to their advantage and people are suppressing their real feelings. But on the first day in your new job you discover the power to loudly shout NO in the face of anyone annoying, mean or maybe awkwardly asking you to get them some milk, and that’s where Say No! More begins.

While Say No! More sounds like it could be a game based around a gimmick, there’s a lot more depth than you’d imagine to the main mechanic, and it’s wrapped up in such a heartfelt, funny and smartly written package that it’d be hard to moan even if there wasn’t more to it. From the first few scenes the silly tone is laid out and this game never shies away from being truly ridiculous. After making a character in the robust character creation tool (with a fantastic diverse range of options), it’s the first day of your new job and your roommate gifts you a special packed lunch to celebrate. Shortly after they ask you to cover rent for the month, which you sadly can’t refuse just yet. However, minutes into the job your boss steals your packed lunch, knowing you can’t refuse, whereafter you accidentally find a hidden tape with the powerful knowledge of the word “NO” recorded within.

After a tutorial swimming in 80s nostalgia, with pumping synthwave music and some words from a very enthusiastic instructor in workout gear, you return to rampage through your office and unleash the power of “NO!” on anyone who dares cross you. Fairly quickly gameplay stretches beyond a single button press to say no, with different options unlocking for sarcastic laughs and different varieties of the word “NO” to spice things up. You can even charge your “NO” for a satisfyingly booming proclamation that can send annoying co-workers flying. These additions are spread out consistently as you progress, and add a much-needed bit of variation to the simple formula.

You also don’t always have to say no, as occasionally kind co-workers will request you look at something for them, or challenge you to a staring contest, in which case you’ll have to quickly withhold your no. These can lead to branching paths and offer a look at some different scenes, so there’s a good reason to pay attention as you demolish your office with language. As you progress you’ll accrue an arsenal of ways to react to things, but sadly beyond occasionally needing to charge your “NO” it’s not often that the different ways of doing so make a difference. When the game introduced the varieties of saying “NO” I assumed I’d have to use certain types of “NO” to do different things, but it makes little difference other than simply how you say it.

Luckily, Say No! More is a deeply funny game, and the lack of meaningful ways to use your arsenal of NOs doesn’t detract from the fact that it’s consistently hilarious to either charge up a hefty bellow or simply stop someone in their tracks with a cold counterpoint. As co-workers bombard you with petty requests, like “unjam the printer”, “get us more coffee beans” or just “do you want to cover my shift this evening”, it’s a cathartic experience getting to vicariously shout back into their condescending faces. It isn’t just confined to menial office workers either, as Say No! More moves the ridiculous story along at a breakneck pace that constantly throw new scenarios and enemies at you, with the upper levels of management being your eventual nemeses.

It’s often hard to make a game that is funny outside of gameplay but also in writing, and Say No! More somehow manages to nail both. Simply shouting “NO!” at people would have been fairly funny anyway, but the voice acting and dialogue work to create a wonderfully surreal world that also has a lot of heart, thanks to some great characters and surprisingly emotional beats. It’s also fantastic to see such unapologetic diversity, so kudos to the developers for crafting such a heartwarming tale with a wide range of characters.

Finally, the game also has an incredible soundtrack even beyond the 80s montage sequences, with the score perfectly matching the silliest moments and the more impactful emotional elements. Coupled with the fitting polygonal visual style and its a distinct tone that marries perfectly with the heartfelt comedy the game works hard to achieve.

Say No! More is a game built around a simple mechanic, but luckily it’s paced well enough to never outstay its welcome. This does make for a brief game, but one so full of laughter and truly bizarre moments that it’ll stick in my mind for months. I do wish the gameplay gave me more to do with the great central mechanic, but anyone looking for a lighthearted romp and some cathartic shouting at co-workers will have a blast.

Say No! More is a brief title that makes up for underutilising its core mechanic with some hysterical moments and a lot of heart. If you could do with a game to cheer you up after a hard day, don’t say no to this one.