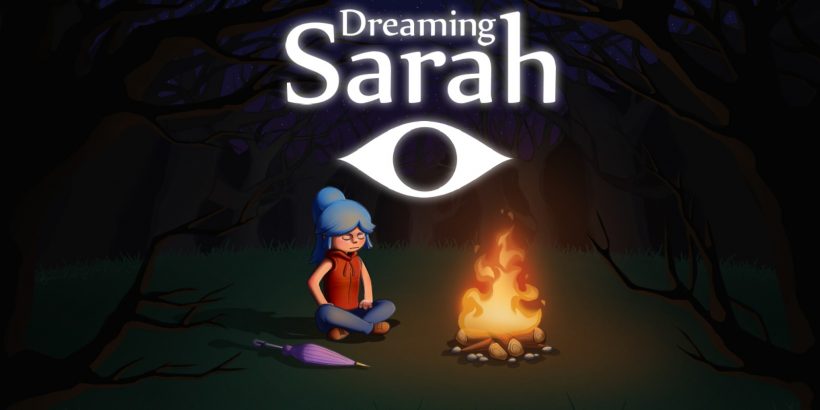 Dreaming Sarah is the sort of game you could play for two hours and then be completely unable to describe what you just did to anyone who asked.

This a surreal adventure from Ratalaika Games which has you play as Sarah, in what could probably be most accurately summed up as a puzzle-platform adventure. With dreams being the central focus, you can expect to see the weird, mysterious and macabre along the way, and picking up new items will allow you to explore new areas of the very weird environment.

The items mentioned each have a different purpose. While for the most part they aren’t used very often, they do perform an essential function, and so it’s impossible to get by without them. There are glasses that allow you to see things undiscoverable to the naked eye, a necklace that gives you the ability to swim, and a magnifying glass that turns Sarah into a pint-sized version of herself. Other items are more superficial, including a paint can which simply changes Sarah’s colour.

The emphasis here, though, is in the adventuring and exploring. The game has one grassy overworld, but the rest of it is split into dimensions of differing themes – a clock dimension, a tooth dimension and a club dimension are on the list, giving you some sense as to how these areas look. Each area is very sparsely occupied by NPCs who can either request you do something or retrieve an item for them – or on the other hand, they can be completely insignificant to your progress throughout the game.

In many of the game’s dimensions, you can explore by heading leftwards as well as the traditional left-to-right of platformers of yore, but the onus is on ‘can’ explore, rather than ‘must’. You can head off some distance in one direction only to find a sentient balloon character who asks you, “Are you lost? I can’t help you”, or words to that effect. It’s actually quite a charming way of adding character to Dreaming Sarah’s world, and doesn’t have the sense of annoyance that you’d normally associate with spending time exploring an in-game area to no avail.

The retro feeling of the foreground design has just the right level of contrast with the atmospheric background in the main dimension, but the game often goes with a very simplistic background in the other dimensions. To be fair, you can’t do that much with space or underwater when you’re presenting such a retro aesthetic, but at least it helps to showcase the key items and other characters. Dreaming Sarah’s music is actually one of its standout aspects, evocative of mystery and dreams and exactly what was needed in relation to the game’s subject matter.

In fact, Dreaming Sarah is overall a surprisingly good example of an easily manageable adventure to occupy an afternoon. Things move along quickly enough and while the plot isn’t exactly typical, the appearance of items generally gives you an indication that you’re doing things the right way. Generally, it’s very difficult to miss what you have to do or where you have to go next, and the majority of veering off the beaten path is simply to find an insignificant NPC. As a result, you really don’t have to see everything the game has to offer in order to complete it, but even if you do go out of your way to do so, a run of three hours would be more than enough for your completion time.

Dreaming Sarah is certainly worth checking out, though that short run time for a 100% playthrough means there’s little chance you’ll ever return once you’re done.

Dreaming Sarah makes for a fun adventure with atmospheric music, but you will spend the entire experience thinking, ‘what on Earth was that?’. It’s a shame that it’s so short, as I’d have liked to see more of it.