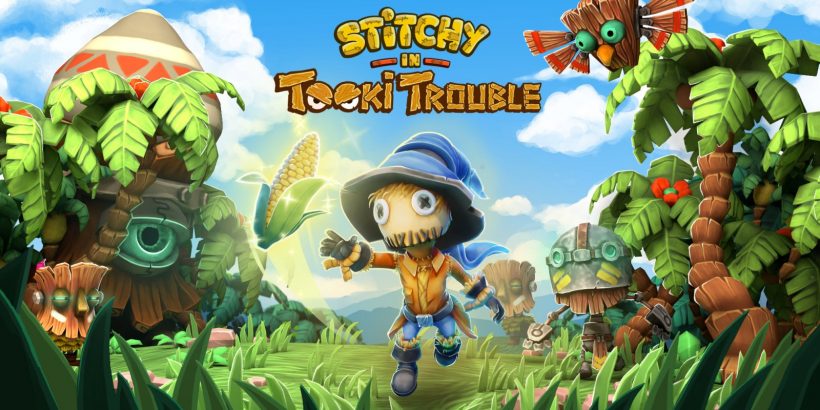 We all have our addictions. For Donkey Kong, it’s bananas; Crash Bandicoot loves apples. For Mario, it’s all about the gold coins (come on, let’s be honest: you’d repeatedly rescue a princess if you knew there was THAT much gold available on the journey). For Stitchy the scarecrow, he can’t resist sweetcorn.

Yes, that radiant yellow corn is too good to resist, but unfortunately the thieving wooden Tooki have stolen all the sweetcorn and Stitchy wants it back. Sweetcorn is packed with zinc, magnesium, copper, and iron after all, although how much those nutrients help a scarecrow made from straw is open to debate. The corn has been spread over three worlds each composed of ten side-scrolling levels, with a boss fight at the end of each world.

Stitchy himself has a pleasing visual appearance, but taking control of him for the first time, my first thought was that he’s got quite a gentle pace to him. There doesn’t seem to be much of a sense of urgency to his movement, although perhaps this is inevitable when your body is made of straw. After playing through the first few levels, it becomes apparent that this tale isn’t going to be too challenging. The usual platform game tick boxes are present and correct: enemies who can be vanquished by jumping on their heads, leaps across spikes and fast-flowing water, and crates that can be crushed for points (or sweetcorn, in this case).

After plodding through the early levels, repetition sets in. The same enemies are recycled and re-used with little variation, and there are no other collectibles to find other than the corn and three totem pole pieces that are hidden through each area. I use the word hidden in the loosest possible sense; I found all the pieces on my first playthrough of World 1 with relative ease. Once a level is complete, the only incentive to replay it is to collect more corn (a new life is awarded for every 100 found) or to challenge yourself to beating the level within a certain time, thus earning a number of stars. But with Stitchy the scarecrow lacking much of a sense of pace, it’s not really a game that appeals from a speed-running perspective.

The first boss fight is surprisingly long although not too challenging, after which World 2 introduces the slippy slidey dynamics of ice and snow. Some new foes are introduced, and novel use of the theme is put to good use, with ice bridges that crumble as you run across them. It should be noted that visually Stitchy in Tooki Trouble is pleasantly vibrant; there is a real sense of location, with background animations that bring the scene to life. When Stitchy loses a life, his straw innards float away on the breeze; a rather simple but effective moment.

The third world takes Stitchy through a factory filled with mechanical contraptions and fiery dangers, but the fundamental structure of each area remains the same. Lives are generally quite plentiful, and there is a flag half-way through each level that saves your progress.

Maybe we have been spoiled with platform games offering new experiences with each successive zone; Nintendo, of course, are masterful at this. Play through a Super Mario game and it’s not uncommon to find a wonderful idea being used once and never repeated. It’s that variety that makes us return to the classics again and again. But Stitchy in Tooki Trouble fails to offer that flow of new ideas as you progress through the game. The only exception are the mine cart levels which get the adrenalin pumping a little. There is one of these rides in each World, and the change in pace is much needed, offering some dynamic jumps to avoid pitfalls and claim totem pole pieces that are (here, at least) a little more challenging to retrieve. Maybe Stitchy’s future adventures should all be on wheels?

Stitchy in Tooki Trouble is obviously aping (no pun intended) Donkey Kong Tropical Freeze. From the moment the game begins, it is impossible to avoid that comparison, and this is perhaps the game’s biggest downfall. Being such a blatant tribute to the antics of the legendary ape, it’s inevitable that the two games will be compared. Tropical Freeze has a much bigger variety of locations and enemies, not to mention the tactical decision making of different available characters and power-ups. It also has a stronger soundtrack.

Stitchy in Tooki Trouble would be a good jumping point for a player who wants to get into side-scrolling platformers. It has a simple concept, and there is definite appeal in its colourful fairy-tale surroundings. It won’t take too long to complete the levels on offer, and there is no escaping the fact that collecting sweetcorn and more sweetcorn can become quite a grind. Poor Stitchy could do with more variety in his diet.

The developers themselves have cited Donkey Kong as an influence, but when games such as Tropical Freeze, Rayman Legends, and Crash Bandicoot offer so much more, it feels like Stitchy has drawn the short straw. It’s not a bad game; it just lacks enough excitement to maintain interest.

There is an evident charm to the visuals, but Stitchy in Tooki Trouble mimics Donkey Kong Tropical Freeze while offering much less substance: an inferior clone. This adventure works as a simplistic platformer, but nothing more.