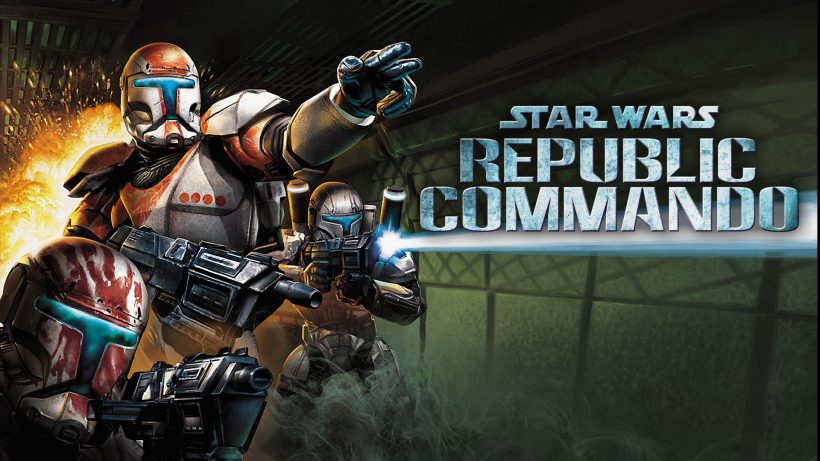 Aspyr’s latest Star Wars re-release comes with seemingly perfect timing, as fans get ready for the debut of the brand-new ‘Bad Batch‘ animated series on Disney+. Cult-classic FPS Republic Commando is on a Nintendo platform for the first time – after launching originally on Xbox back in 2005 – and in many ways, it serves as the precursor to what the Bad Batch are now in the Star Wars universe: a group of bad-ass clones sent to do the jobs that normal clones can’t.

With its now-somewhat antiquated design not zooming across the screen as fast as in Episode I: Racer, the cracks begin to show a little more, but it’s still an immersive single-player thrill ride that a series fan can appreciate.

Republic Commando puts you in control of an elite group of clone commandos, sent in by the Republic to carry out more dangerous and important missions. After an initial cutscene showcasing the formative training process of a clone trooper, you’re introduced to your ragtag group, with each of your soldiers having their own speciality and witty personality to match (something you’ll quickly become aware of over your team’s intercom system).

As the leader of this ragtag bunch, you’ll not only have to shoot your way through waves of enemies – from the bug-riddled Geonosis to the Wookie home of Kashyyyk – but also command your team in order to succeed. When not splitting up to complete the assigned objective, you can order your squad to form up, secure areas, plant explosives, hack into terminals, and more.

Displayed concisely through icons on your HUD, this core mechanic really makes you feel in control of a close-knit group of specialists, when it works. Sticking to tactics when in a clutch situation can feel frustrating, as while it’s great when telling a squad member to get in position or to set up bombs, it often seems to go a bit pear-shaped when a bunch of enemies show up. Luckily, depending on how much you like commanding your squad versus how much you’d like to just get on with the mission at hand, you can fiddle around with tactical intensity in the settings, which will tweak the AI and its dependency on your orders.

While the atmosphere and story pull Republic Commando through, its core FPS gameplay is not very good by today’s standards. Sure, we’re probably spoilt by the likes of Apex Legends and Call of Duty, but it’s still a bit of a struggle to get used to. It feels difficult to aim precisely, particularly with some enemies seemingly flying in from nowhere, and it never feels like you’re doing damage either. There is an aim assist function, but given how Episode 1: Racer had motion controls added, this feature could have been a nice touch in tweaking aim when lining up a shot.

As for the enemies themselves, there is some nice variety, from Droids, to Geonosians, to even Trandoshan mercenaries (which fans of Bossk might recognise). Each have their own tactics and weaknesses, and you’ll be able to pick up special weapons from them along the way – including a charging beam gun reminiscent of the Tau Cannon from Half-Life, or a classic shotgun-style blaster.

Heavy enemies – such as Super Battle Droids – are often annoying and boring to kill, bullet sponges even on the easiest difficulty that simply drain all your ammo and require you to focus attacks from the whole squad. Your standard clone-issue rifle isn’t much to write home about, but it does feature some sniper/grenade launcher attachments that can come in handy here.

Republic Commando exudes prequel-era energy, and the music is incredible, with licensed tracks from John Williams instantly making you feel like you’re within the Star Wars universe. Not only that, but attention to detail with sound effects and references throughout make it a pleasure exploring the game’s environments as a fan.

From the squeaks of mouse droids zooming past your feet when sneaking around a Republic Cruiser, to the clanks and bangs of Droid production lines as they’re heard in the films, the environments are truly immersive and feel connected to the wider lore. The game also features some pretty epic original music, with chanting and singing from a choir in an ancient Mandalorian language. If that isn’t cool to you as a Star Wars fan, I don’t know what is.

Given that this is a port of a game released in 2005, performance in Aspyr’s revisit of Republic Commando is disappointing. The game looks good still, at least in handheld mode, but frame rate dips interrupt the flow of gameplay and are noticeably bad in places. However, some playing the title haven’t had any problems with frame rate, and so you may not encounter any hiccups yourself. Still, this shouldn’t be happening.

Overall, while die-hard Star Wars fans and those revisiting Republic Commando for nostalgic reasons will have a lot of fun with its action-packed campaign, aged shooting and shoddy performance may stick out for new players. Still, it’s a great way to get geared up for the ‘Bad Batch‘ animated series.

Disappointing performance issues and an overall dated design make it a harder sell for new players, but Republic Commando’s unique, exhilarating Star Wars campaign is still a ton of fun in 2021, and one that nostalgic fans will get a kick out of alongside the Bad Batch animated series.