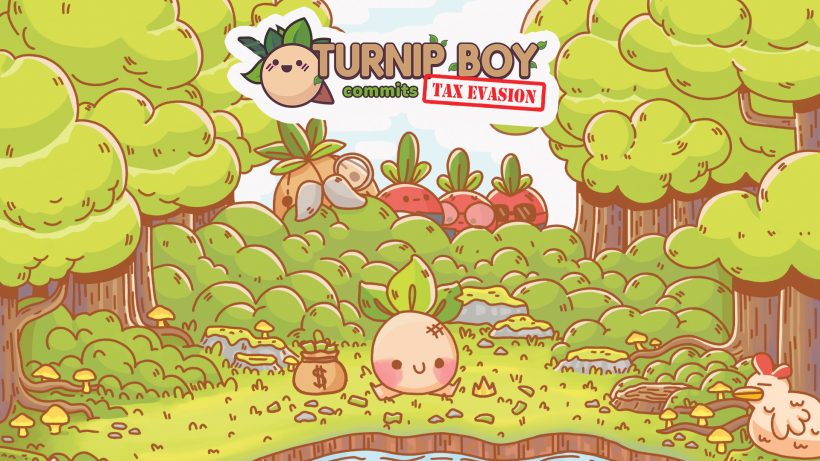 The best thing by far about Turnip Boy Commits Tax Evasion is its name. Don’t read too much into that, though; that name is so wonderful, there’s still a wide range of possibility left.

Turnip Boy is an old-school Zelda-like, a 2D adventure with combat, puzzles, dungeons, and characters. And character, lots of that, too. It really looks very much like A Link to the Past in places and, of course, there’s the obligatory reference to that quote.

But Turnip Boy makes the wise decision to go the anthropomorphic route, and to go all-in on it. Every manner of fruit and ‘root’ is present, and each has a delightful look and persona. Carrots, blueberries, and acorns with sass, humility, and anger issues. The game scores big on dialogue, with plenty of humour, if not so well on depth of storyline. What’s here is serviceable, but if there was any level of meaningful narrative, it went over my head.

The little storyline that is present revolves around Turnip Boy’s finances, and the demands of one Mayor Onion, an allium of dubious nature if ever there was one. In practical terms, the set up serves to present Turnip Boy with a series of tasks to accomplish and dungeons to conquer. A very nice touch is the game’s collectible currency: tax-related documents! OK, that sounds pretty terrible, but it offers up a moment of satisfaction when ripping up various newspapers, receipts, and contracts along the way. Pointless and silly, but charming.

One of the very first impressions Turnip Boy creates is that of frustration. The game makes a terrible mistake in reversing typical controls: here, B means ‘continue’ whilst A is ‘back’. It matters a bit less in-game, but menu navigation is painful. Thankfully, the action controls are intuitive and easy once you get used to switching the item you’re holding. In general, Turnip Boy is very accessible and its gameplay more than familiar.

You, Turnip Boy, can hold an item, one of a series you’ll acquire throughout the game. A couple are for combat, there’s a shovel, a watering can, a portal-creation device; these things are often used for puzzle-solving which is a significant part of the game. Puzzles range from flinging bombs at things and moving blocks to plug holes, to watering things to grow portals (?). Nothing is particularly complicated here, and if it weren’t for the wry humour, you might imagine this were a game for a young audience.

There’s combat in both over and underworlds, although above ground it’s usually a case of staying still and lashing out a few times to defeat snail or worm or whatever. There’s little variety in how these enemies behave. The use of both combat and puzzling in the two different types of location is welcome, and the dungeons do feel more threatening than the safety of the veg patch, which makes a lot of sense. Underground, enemies are both more intelligent and more dangerous, as it should be.

The graphics are charmingly low-res, and are complemented by smoother vectorised cut-scenes. It works really well in handheld, giving off a warm feeling of Game Boy-level nostalgia. The soundtrack is, predictably, a chirpy, feel-good slice of chiptune melody. It doesn’t really get annoying, despite its repetitiveness.

A few bosses get involved in the action, but apart from one (which happens to not even be the final boss), they’re all very straightforward. The single boss that is more of a challenge demonstrates how Turnip Boy comes close to offering more, but it’s more of an exception that shines a spotlight on the lack of meaningful gameplay elsewhere. Apart from this instance, when I sat back reflecting on the game at its end, I couldn’t really remember that much that had actually occurred. Turnip Boy was a game I played mostly on auto-pilot, because there wasn’t that much to engage me.

It’s difficult to go in too hard on Turnip Boy because everything about this game is so nice: the characters are cute, the locations are bright and inviting, the touches of humour are well-judged. As a game in the classic 2D action/adventure style, it’s a reasonable effort, plays well, and it looks and feels the part. But there’s something missing here, as if the game needs more polish and more substance. It really is over all too quickly; you’re looking at 2-4 hours total gameplay, and that upper range is just for completionists. Coupled with the simplicity of the challenge, Turnip Boy borders on feeling like a fancy demo more than a full-blown adventure.

Turnip Boy Commits Tax Evasion manages to pull off the impressive feat of not really featuring turnips or tax evasion that much. Both concepts are present, they just never really feel that integral. It’s as if somebody came up with a core gameplay engine and then, somewhat lazily, layered a couple of crazy concepts on top. They didn’t really do the necessary fleshing out. The game, short as it is, is still playable — and pretty enjoyable, at that — it’s just not that satisfying.

Turnip Boy is an attractive, accessible Link to the Past-like with some nice touches and an original premise, but its execution provides nothing new and it’s over very quickly. It’s great for a short burst of handheld action, though.