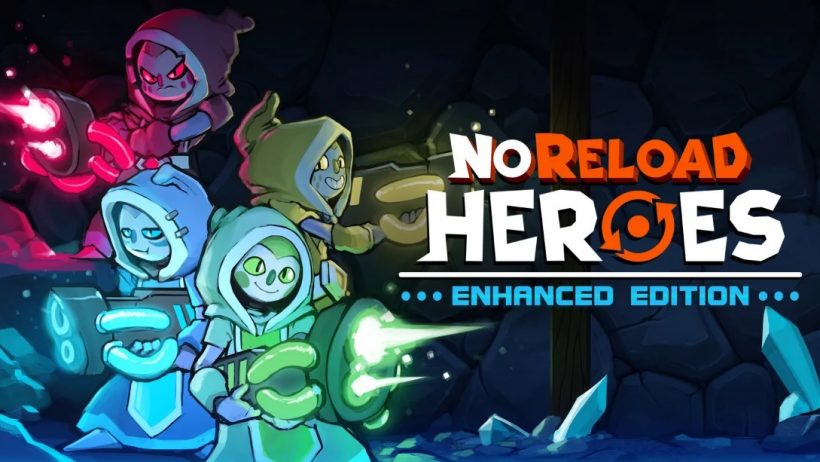 You have to appreciate any game that throws you into the action instantly. This is most definitely the case with NoReload Heroes, a procedural and fairly inventive twin-stick shooter where you and three others must fight your way to the top of a castle while fending off legions of pesky foes. All this you do in the effort to stop a rogue AI you’ve created. While it may initially sound like an extremely basic setup, NoReload Heroes makes up for its inherent simplicity by absolutely delivering some colourfully chaotic couch co-op fun.

The first thing to mention is that NoReload Heroes easily lives up to its name. The arcade action never stops from run to run because the focus is solely on the firing. On a purely technical level I was quite surprised by how much the game leans into this concept, because while it would have been easy to just bake an endless stream of fire into each gun or weapon type, the game’s namesake actually factors into positional elements you need to be aware of, like recoil, fire rate and bullet size. All these traits vary in all the guns you’ll pick up, randomising your chances of success but also giving you a slight advantage in certain areas. No weapon handles quite the same.

The act of shooting also always feels great thanks to some excellent HD Rumble integration. Rarely does an indie game take advantage of the Joy-Con so well, but NoReload Heroes uses these features brilliantly. Every shot always sends a pleasant ripple of vibration through the palm of your hands, which can be big or small depending on how powerful your currently equipped weapon is. Small touches like this help elevate the game above the swathe of other top-down shooters on the Nintendo eShop. HD rumble mixed with weapon recoil gives the game a welcome sense of weight and feedback.

Shooting your way to the top of the tower or to one of the three random bosses featured here is no slouch, especially for those who opt to go it solo. While it’s true you have the chance to pick up guns that can freeze, swarm and do much more to your enemies, NoReload Heroes makes a conscious choice to not let you dodge. Instead, you must use the environments and objects around you to block the rampant fire of your enemies, finding the right time to pop out and get a shot in for yourself. Another option is to keep moving, but be warned: Your party always starts with slow manoeuvrability, and it’s only when levelling up (and you’re given the choice between two buffs) that this can improve. This charming shooter is stuffed full of risk/reward opportunities.

One of the only drawbacks to this version of NoReload Heroes, despite it being “Enhanced”, is the lack of online co-op support. This is a real shame considering that blasting foes using creative weaponry really comes to life with friends. You and friends can play seamlessly enough by connecting four controllers to one console, sure, but it really prevents this Switch release from being the definitive version. Zone Contest, where two teams of two must fight over the same point, is a nice if not especially deep PVP concession, though.

Overall, NoReload Heroes doesn’t reinvent the wheel, but some clever technical additions and a near-endless amount of weapon types always makes for a fun time. Online compatibility would have been appreciated, true, yet the randomness of each run, coupled with the challenge of not being able to dodge, makes this a surprisingly challenging co-op shooter still suited to players of any age.

Despite its formulaic structure and simplistic visuals, NoReload Heroes makes the act of firing creative guns endlessly thrilling, thanks to great HD Rumble integration and so many different firing types. It’s worth going for the win as a true team of four.