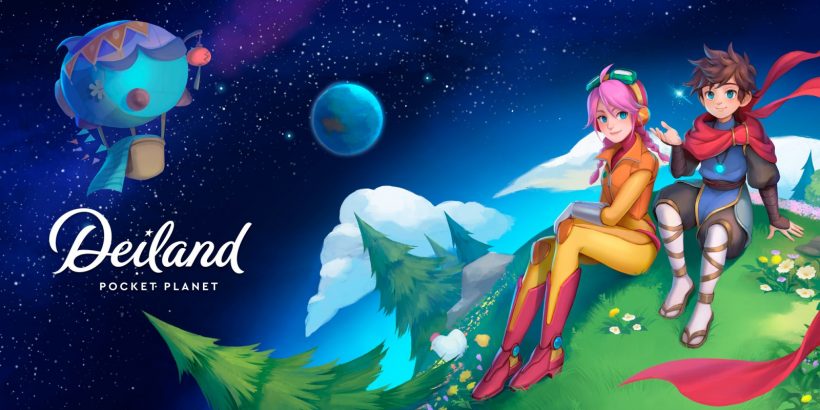 With the increasing number of farming simulators currently available on the Nintendo Switch, and with more entries being released at an astonishing frequency, it becomes harder by the minute for any game in this genre to stand out.

That’s not surprising, though, when you consider how well the genre is served on Switch, with so many great franchises and unique approaches. From the indie phenomenon Stardew Valley to the long-running Harvest Moon and Story of Seasons series (not to mention the different takes offered by games such as Graveyard Keeper and Yonder), any fan of the farming genre has a long-list of options to choose from. Deiland: Pocket Planet Edition is one of the most recent entries on that list, and it promises to offer something different thanks to its planetoid-based world structure.

Deiland’s main inspirations aren’t limited to the farming sim genre, though. In fact, when you take a look at the character design and how the titular pocket planet is presented, you will instantly identify its origins from Antoine de Saint-Exupéry’s seminal book, The Little Prince. Similar to the narrative found in Antoine’s magnum opus, in Deiland you’ll also control an ingenuous scarf-wearing young boy who finds himself living on a tiny planet. While living there, he will come across many different characters that may help him in many different ways. On paper, this is a premise that offers tons of potential for a light-hearted adventure. Unfortunately, part of that charm is lost when you need to deal with Deiland’s moment-to-moment loop.

While the premise is inspired by The Little Prince, you can’t forget this is actually a farming sim game. This means that most of the progress will actually take place via activities that are tied to how you’ll choose to develop and explore your small planet. Just like other games of the genre, Deiland features a season system. Every seven in-game days (which don’t last for more than a few minutes each), your planet enters a different season, which will affect the types of crops you’ll be able to plant. While taking that in consideration, you’ll engage in different types of activities: planting, watering, and farming the crops; cutting wood and replanting trees; mining for rocks, metals and minerals; fishing on the planet’s lake; and fighting with monsters that may appear from time to time.

That doesn’t sound much different than other farming sim games, but Deiland’s main issue starts with how its quest system is implemented. From time to time, your planet can get visitors from different parts of the cosmos. Each one of these characters has their own personalities and characteristics, including their specific overarching story. In addition to working as shops for certain types of goodies, these characters give you quests, which are tied to certain elements needed for the game’s progression. As a consequence, Deiland features an incredible amount of downtime. After you finish a certain quest, it may take a long time for that character to appear again with your next quest. During these segments, while you don’t have any clear objectives, you’ll have to repeat the same activities aimlessly, just to pass the time.

You may argue that this kind of repetitiveness can be part of the farming sim genre at times, because in games like Stardew Valley or Story of Seasons you do the same activities over and over again because you’re always thinking about what your next objective is. During many moments in Deiland, you have absolutely no idea what your next objective may be, so you may spend hours planting specific crops only to learn that you will need to spend time in a totally different activity. Enjoyable activities like farming, mining, and fishing become no more than a simple chore that you are doing simply because there’s nothing else to do.

In order to add some importance to your most menial tasks, Deiland also comes with some survival elements and a RPG-inspired level system. From the small tasks to the big quests, every activity gives you experience points. Each time your character levels up, you can then choose to increase one of two given skills, which includes agility, intelligence, stamina, and strength. As expected, with those new skills your character performs better on specific types of activities and contexts. These are especially important on certain post-game segments where you can explore other places, which are often filled with monsters. A welcoming change of pace comes from these segments but, unfortunately, they are sparse and may take a long time (and lots of patience) to unlock.

During the first few hours of play, Deiland: Pocket Planet Edition looks and sounds like your next favourite farming sim. Its setting and cartoonish art style really help to set the tone of a relaxing and charming experience. While the enjoyable presentation keeps fresh though the whole adventure, the clunky quest system transforms all the enjoyable tasks into repetitive chores.

With its unique premise and enjoyable art style, Deiland: Pocket Planet Edition could have the potential to be your next fave farm sim. Unfortunately, its clunky structure transforms part of the experience into an aimless chore.