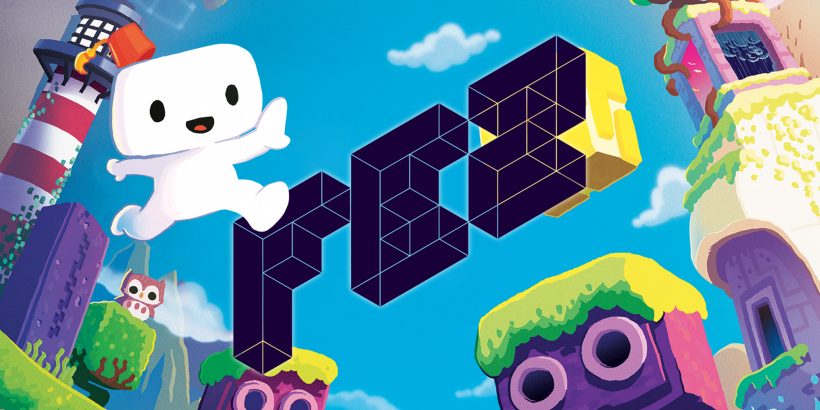 Good things come to those who wait. And boy, have we waited for Fez on Switch. This legendary indie puzzler, created by the infamous Phil Fish (if you haven’t seen Indie Game: The Movie, do it now), found its way to audiences as part of the second wave of indie hits in 2012 following the success of Braid in 2008. It’s absolutely bananas that it’s taken this long, but now that Fez is here, following a shadow drop at the April Indie World Presentation, it’s time to evaluate how this adorable head-scratcher holds up after a decade of indie game innovation.

Our hero throughout this tale of perspectives is Gomez, a happy little chap dwelling in a two-dimensional village. For the uninitiated, Fez is named such because of the classy hat that adorns our hero’s noggin. But this hat isn’t just for looking dapper, no no. After a strange monolithic golden cube splits into countless fragments, and the very fabric of existence glitches, it’s this titular garment that grants Gomez a secret knowledge: there are actually THREE dimensions! Holy cuboids! Gomez now has the ability to flick the game’s perspective 90 degrees left or right at any time, opening up his flat world to dizzying new possibilities. For us, the player, this means switching perspectives to overcome countless puzzling and platforming challenges, making impossible jumps possible, and utilising increasingly clever mechanics that continue to impress. Of course, the problem with mind-bending perspectives in games is that they’re very difficult to describe, but I promise you – it’s beautifully implemented.

There are no real enemies in Fez, no real punishments for falling, and no final big bad to defeat. The ultimate goal is for Gomez to collect enough of the 32 golden cubes to unlock all the necessary doors and save his world. For those that want a pleasant but rewarding puzzle-platforming journey, the constant shifting of perspectives and a keen eye for your environments will be more than enough to see you through to the end and you’ll have had a perfectly satisfying journey. But, I implore you to look deeper, because the true magnitude of the ever-expansive and layered world of Fez can’t be understated. For every golden cube, there’s a blue anti-cube to be found, much more difficult to reach, and hidden beyond walls of lateral thinking and exploration.

You’ll soon notice hieroglyphs and coded scribblings scattered everywhere. Though these may at first appear to be nothing but decorative details, it soon becomes apparent that there’s a method behind the madness, and you’ll need to crack these codes and think even further outside the box to achieve the truly ridiculous hidden goals within the game. When Fez released back in 2012, discussion forums were ablaze with eager Fez cryptographers working tirelessly to decipher codes together and unlock all of its secrets. It was a beautiful thing, reminiscent of the collaboration of an older generation of gamer through sharing hints, tips, and cheat codes. But whether you want a leisurely stroll, a cryptic challenge, or something that will have you scribbling all over your wall and not showering for a week, Fez has you covered.

Now, say what you want about Phil Fish and his online antics, the man knows how to put a game together. Working alongside his programmer, Renaud Bédard, every “trixel” was painstakingly created in 3D by extruding individually designed 2D surfaces in photoshop using their own game engine. The world is bursting with beautiful colours and it becomes an exciting prospect to head through each door to see what awaits you on the other side, as you begin to fantasise about the history of the mysterious artefacts you uncover. Everything is complimented perfectly by a dirge of synthy perfection from composer Rich Vreeland (Disasterpiece), otherwise known for his excellent work on Hyper Light Drifter, which gives Fez a gorgeous ’80s dreamscape vibe, dangling us somewhere just outside of reality.

The Switch is a natural new home for Fez with 60fps in handheld play. Swapping perspectives with the Switch’s shoulder buttons feels fantastic and the rumble features are superb. There are, on occasion, moments when flicking between viewpoints will show a small crack in the game’s design, and every now and then you may even fall through one, but that’s the nature of the beast when dealing with something as fluid yet complex as this, and these moments are very occasional and fleeting.

Fez is as good now as it ever was, but it’s amazing to see it granted another lease of life as it’s exposed to a new generation of players. Whether you’ve never heard of Fez before or if you played the OG nine years ago and you want to see if you can find some of its deeper secrets, it should be in every Switch owner’s library. This is what indie gaming is all about. It’s Smart. Accessible. Complex. Timeless. Fez is a rabbit hole that you will never stop wanting to tumble down, though depending on how far you go, you may end up a Mad Hatter.

Fez was originally released at a time when indie games were exploding, and it’s a perfect example of why that happened. Fez is a gorgeous work of art, both effortlessly accessible and masterfully complex, and even nine years later, it’s practically perfect.