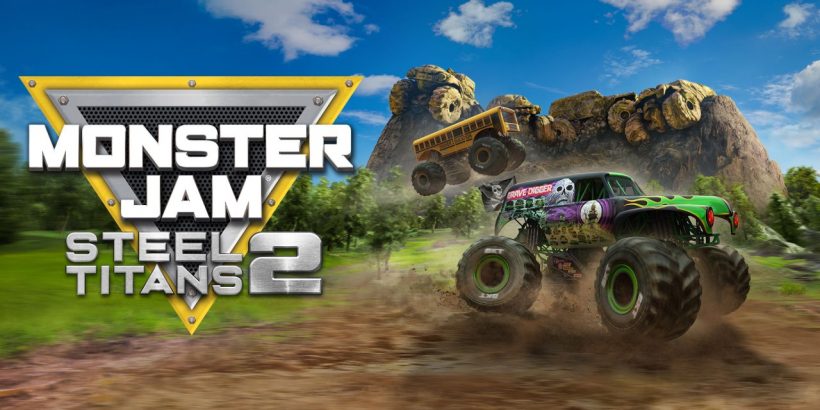 Did you ever see that episode of Top Gear where Jeremy Clarkson puts the Robin Reliant through its paces? You know, the one where every time he tries to round a corner at the paltriest of speeds the entire thing falls over. Well, that’s a similar sensation to that of piloting the monster trucks in Monster Jam Steel Titans 2.

This is a cover-all-terrain driving game that blends traversing a smallish open world and taking on all comers in a series of challenges to show off your mastery over your abnormally-sized vehicle. And it sure does take some mastering. The third Monster Jam entry in the Switch library after Crush It and Steel Titans, Steel Titans 2 involves driving as chaotic as series fans have come to be familiar with, with the senseless destruction of mowing down every moveable element of the environment, blended with the need for thinking power in order to figure out the physics of getting your vehicle up to seemingly-unreachable locations to pick up the collectables dotted around each part of the world.

In fact, you can distract yourself with working out how to reach different collectables and areas before you ever even think about the competitive elements of the game. You might find yourself doing that by accident, because right from the off, the game gives players very little by way of instructions regarding what they need to do. Sadly, the overworld-based replayability of the game feels forced, as it involves exploring in differently-designed trucks from the game’s sizeable list of options, with secrets only becoming accessible if you are driving the right vehicle.

This is disappointing already as it is, but even more disappointing is that the secrets are pretty much always lame. There is promise in an overworld filled with secrets, but when the execution fails to deliver, the player is really going to feel short-changed on the amount of time that they’re putting in.

Going back to the handling of the vehicles, one advantage the trucks have over the trusty Robin Reliants of yesteryear is that they’re capable of performing tricks in order to get them back on all four wheels. You do that by pushing both control sticks in the same direction, either left or right. Timing is of the essence in the game’s competitions, however, and it’s hardly a quick process to get yourself back the right way up.

For that reason, you’re better off restarting an event rather than wasting time watching your truck flop about like a discarded Magikarp. The physics just seem to get thrown out of the window as you watch the truck pull off about ten accidental standing front-flips, only to land upside down and demolish any chance you had of delivering a trick combo.

When tricks are the name of the game in one of the competition events, these dodgy controls and physics are a bit of a problem. This is not a game where it feels like you’re really driving a monster truck, so for that reason when you manage to pull off some of the game’s not-too-hard-to-master tricks, there’s not really much there by way of satisfaction once you’ve done so.

The general rule of thumb across the other events – which include races across the overworld, more compact stadium challenges or triangle-collect-athons – is that if you roll the vehicle and it doesn’t end up back on its wheels right away, you can kiss goodbye to winning. Lots of braking is key to winning any race, which only serves to suck away the thrills driving these massive machines was supposed to generate in the first place.

Even the way the game lets you know things are going well feels underwhelming. Competitions take place over the course of a series of stages, but there’s no major celebration animation or fanfare if you’ve played a blinder and won against the odds. To be honest, the odds aren’t exactly against you in the first place, because if you keep tapping the break before any turn in a race you’re highly likely to end up at the front of the pack.

One thing Monster Jam Steel Titans 2 should be commended for, though, is its later open worlds. While the early ones are wide-open green fields with some hilly terrain, later ones have a dark, haunted theme, and these go considerably further to giving the game a personality – they feel like a Halloween event which are included as part of the package, and at least they aren’t massively bland like the stages which come before them.

The game has online and local multiplayer modes, but of course, an online mode can only be reviewed well when you can find other players for a game. That wasn’t something I was able to do, and with the game having been out for over a month now, things don’t bode well for the future. In theory, though, you can explore the overworld together with up to six others, or take them on in competition style. That’s a good variety of options, at the very least.

Monster Jam Steel Titans 2 finds itself stuck, both due to its physics and Robin Reliant-esque controls. Feeling overall like a by-the-numbers and largely soulless experience, Jeremy Clarkson would probably recommend you stick to the classics. On this evidence, I’d have to agree.

Monster Jam Steel Titans 2 is by and large a pretty bland experience. There’s not a lot of personality on show, and the handling of the vehicles leaves much to be desired. Some interesting open-world designs later on aren’t enough to justify a higher score here.