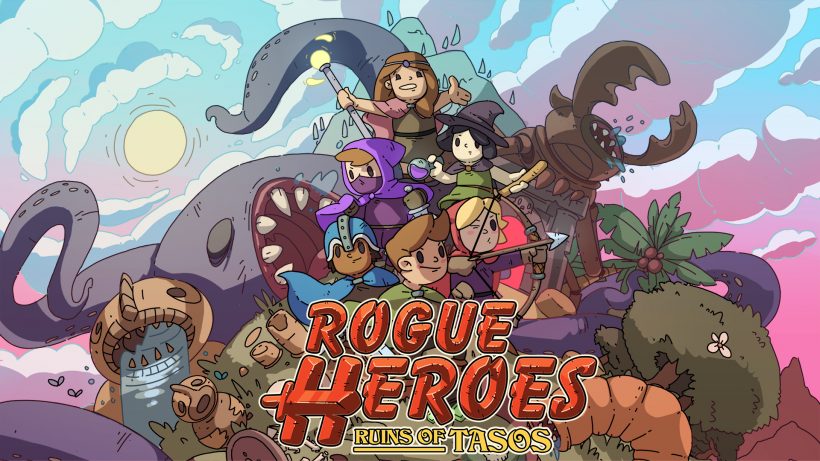 The land of Tasos is a peaceful one. Well, that is until it’s invaded by minions that belong to the four titans held captive within the great dungeons. The seals that hold these titans in place are becoming weakened, and that means a group of heroes must help to restore some peace to the once-great Tasos. The story that accompanies Rogue Heroes: Ruins of Tasos is a simple one, but it’s effective enough. Besides, it’s the gameplay that you’re going to be addicted to.

Ruins of Tasos is a classic adventure game that has rogue-lite elements implemented into it. What’s more, it features 1-4 player co-op so you can share the fun with some friends – thats’ both local and online, by the way. Upon starting a new game your hero will awake in his bed and it is there that your adventure begins.

After speaking to a few NPCs you will be given some initial quests and told to go to a specific place, but you are absolutely free to explore as you wish. A lot of areas may be blocked from the get-go, but that doesn’t stop you from getting to know your new home. Quests can consist of finding specific characters, items, or simply completing dungeon challenges – of which there are four in total.

Dungeons consist of defeating various enemies and solving puzzles throughout a number of procedurally generated rooms, getting more and more difficult the deeper you get. These all lead up to a very tough, but cool, boss battle. As this is a rogue-lite, you’re not supposed to be able to complete the dungeons easily, and so you’ll be required to work off a system of dying, levelling up your character and then going back in and dying again – until your character is tough enough not to die. It’s a gameplay loop that rogue-lite lovers will be well aware of.

Rogue Heroes: Ruins of Tasos features a very basic approach to combat. Attack, block and evade. That’s pretty much it. Of course, you will find items to use in combat, such as bombs or spells, but you get the idea. It’s fast and simple, but it can also become a little annoying. I did often find myself accidentally running into enemies and taking damage for doing so, purely because my character moved so quickly. Luckily, health top-ups are common.

Perhaps my favourite (and the most surprising) feature of Rogue Heroes: Ruins of Tasos is that it features a small city-building mechanic. Upon starting the game your town consists of nothing but a couple of houses, but gradually you will unlock new buildings and areas to purchase with your gems – which you can then place and arrange yourself. You can even upgrade and decorate your house! Eventually, you will be able to build several buildings helpful to your adventures, such as a clinic, a forge, and even a farm. Yes, there’s farming too!

At first glance, it’s hard not to see a visual similarity between Ruins of Tasos and The Legend of Zelda: A Link to the Past. It’s evident that it has taken inspiration from the latter and it’s beautiful. The colours pop out of the screen and the detail is outstanding. Overall, combined with the variety of gameplay elements, there really isn’t a reason to dislike this title.

Rogue Heroes: Ruins of Tasos is a game that I didn’t expect to love as much as I did. With an in-depth upgrade system and the perfect mix of adventure and rogue-lite elements, fans of those genres will find themselves at home here.