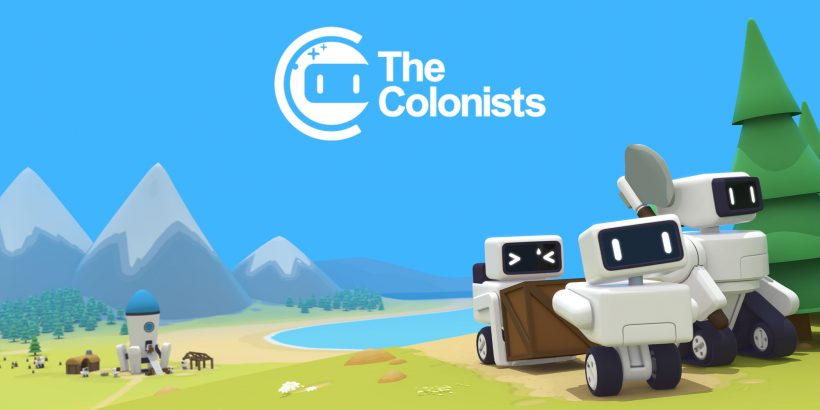 Given how easy the Switch is to play for short bursts or longer sessions, it’s flourished when it comes to management sims with titles like Stardew Valley and Two Point Hospital, offering some hugely satisfying simulation gaming even when you’ve only got five minutes. So, does The Colonists do enough to stand out from the pack? Or does this planet-hopping title leave us feeling stranded?

In The Colonists, it’s your task to colonise (duh) different planets, with each planet increasing in complexity and difficulty. You’ll complete your colonisation by meeting a specific request, such as building a certain item that demands a large number of resources and research, and how quickly you meet this goal will ultimately decide your score on that planet. It’s a great set-up for a game and one that immediately gives you a lot of room to mess around with. The landscape of each planet is randomised, so it’s up to you to make the most of the layout, designating roads and production units in the most efficient way.

There’s also a fairly complicated production line of materials needed, with your colonists needing energy and resources (food and water), buildings and research needing logs or stone to be built or discovered, and then further developments needing newer resources you’ll unlock through research. It’s a complicated hierarchy of needs, and it becomes a bit of a house of cards when one single thing can stop production entirely if you don’t pay attention to the smaller demands. Despite the first level being entirely tutorial, a lot of seemingly simple things are also left up to the player to discover. There is a menu option to give you some quick tips, but these are generally in the vague to obvious category and don’t help with some of the minutia needed to fully understand the game.

Once you do get a grasp of things, however, it can become very satisfying to tinker with optimal layouts and building preferences, as to develop as quickly and efficiently as you can. You’ll soon get a good eye for exactly where you should place your orchards or your sheep farm, for instance, and exactly the best way to build your roads around a level. Each level also has mineral deposits that you need to reach to mine certain materials, so you have to consider this when planning. Plus you will have to place watchtowers to expand your visible terrain and your available building space, so even a single misplaced road can cause havoc later on. Mercifully, it’s very easy to scrap inconveniently placed buildings, but there’s a lot to consider and you’ll need to make roads to reach every point as well.

While the UI does a fairly good job of making things clear – and you can easily swing or zoom the camera to get close to all the units you have to manage – there is still a lot of information buried in different menus that the game does little to prepare you for. It took me several attempts to truly start the game as my settlements would grind to a halt and it took me far too much time to realise the trivial reasons things stopped working. When there’s this many complicated systems in place, I often felt like I was just spinning plates and any second it could all go wrong. More could have been done when a mistake was made to alert the player, as opposed to having to click on individual robot colonists or buildings to finally squeeze out the information.

This becomes even clearer as later levels add even more complexity and even combat to proceedings, so suddenly there are even more plates to spin. But, there is a moment where almost everything clicks and suddenly watching your little flea circus of diminutive androids build further and faster feels amazing. While there are clear markers of the buildings that need issues, and you can see which robots are inattentive, this is still a lot to manage very quickly and many I’m sure will bounce off instead of pouring over pages of written instructions to figure things out. Smaller details like roads only being a few squares long can sometimes stand in the way of fun, as these unexplained limitations only seem to inhibit creativity and waste your time.

When everything is working, The Colonists is a delight. The playful block art style and colour scheme also help to make this feel like your toy box come to life. Coupled with a beautiful melancholy electronic soundtrack, this is a game you can easily lose hours to with a smile on your face. There was some noticeable slowdown and frame chugging, however, and some of the backgrounds are just a block of black for some reason, which is a shame as this is a title begging to be played on Switch.

Altogether, while I had minor issues with The Colonists’ complicated mechanisms and obtuse rules, I put hours into it happily when it finally clicked. When it works, it’s a delight to witness, and the steady stream of things to unlock, different modes and objectives to tackle will keep you entertained. It might not be the ideal management game for beginners, but it’s still a rewarding time if you can get your head around it.

With a rewarding gameplay loop and charming aesthetics, The Colonists is a simulation lover’s dream. There are perhaps too many systems and not enough guidance, but once it clicks you’ll have a blast watching your robot explorers build your own settlements for hours.