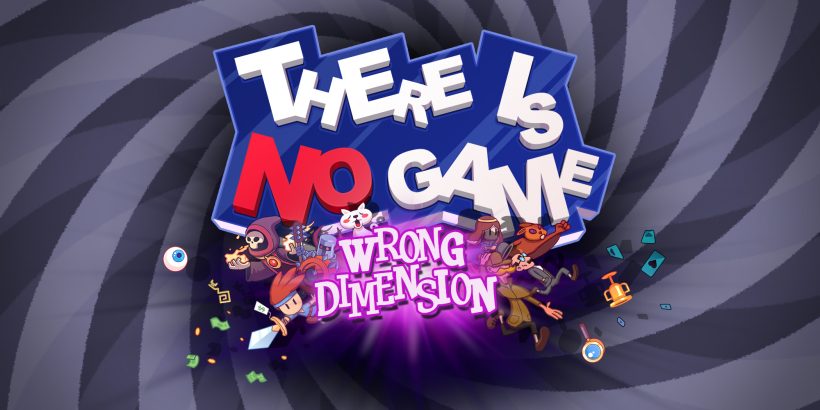 Happy with the general difficulty in games nowadays, but wish they were a little bit harder to actually open in the first place? Well, There Is No Game: Wrong Dimension might just be the perfect title for you.

Originally a small game jam title from creator Pascal Cammisotto, Wrong Dimension expands on its initial playable concept, breaking out across many different game types in a hilarious fashion. Working against a game that’s dead set on not allowing you to play it, you as the user will have to navigate a variety of humorous obstacles the frustrated narrator throws your way, before eventually having to help out and get to the bottom of what’s really going on under the hood when things start to go awry.

From figuring out how to bypass a copy protection system, to smashing a CRT TV screen with a game going on within, Wrong Dimension’s puzzling point-and-click adventure gameplay has you constantly guessing. You’ll have to think outside the box for strange—and somehow still seemingly-logical—solutions to its cavalcade of problems. While most of these puzzles aren’t too difficult to solve on your own, the game also knows that it can get frustrating when you’re stuck for too long, and so provides a really nice optional hint system for when you get stuck.

You can simply tap for a clue when required, and it’ll reveal increasing amounts of information, from tipping you off with a nudge in the right direction to outwardly telling you how to progress if you’re completely confused. Again, while point and click game puzzles often make no sense anyway (something the game mocks along with everything else), this game truly does turn logic on its head and requires you to think differently, so it’s natural that you might not click with one or two of the puzzles. It’s a clever system; a subtle inclusion, but one that really improves the experience, leaving you to focus on the story and humour rather than getting annoyed after being stuck in a certain theme or puzzle for too long.

Eagle-eyed fans might have noticed the clearly Zelda-inspired world displayed in the Indie World Showcase when this game was revealed, and that is a particular highlight. Rather than controlling the hero as perhaps you might have expected, you guide them through the environment in an interesting and subversive take on the top-down, dungeon-crawling formula. After jumping through hoops and helping the hero save the princess, the game reboots as an egregious, microtransaction-riddled ‘free to play’ version, forcing you to accrue in-game currency in order to progress. The excellent visuals and voice acting help to bring this story to life, and really make you feel as though you’re in a constant tug-of-war with a mischievous programme.

Poking fun at different genre tropes and not being afraid to mock itself, the game (or lack thereof, I should say) also has a surprisingly touching twist in its narrative, and goes places that are quite unexpected, providing unique and contextual puzzles along the way. It’s not particularly long and, again, the smart hint system makes it so that bumps in the road that could normally be annoying in a traditional point and click can be quickly passed over. The game knows that the joke can get old if you’re not able to retain the momentum intended, and in that sense, it feels more like a narrative-driven title than anything else.

The game’s presentation is fantastic, creating a genuine framework and structure that feels like you’re fighting against a rogue programme from within a ‘fake’ operating system, or breaking pieces of a tightly strung game experience in order to help the characters progress in a way that perhaps wasn’t intended by the creator. It encourages you to pull at the seams and tear at the fabric and, more often than not, your ridiculous boundary tests turn out to be rather productive in progressing the story.

In terms of the Nintendo Switch version specifically, the game’s touch screen integration works perfectly, and this is a title best played in handheld mode, without the controllers. Sure, analogue sticks work fine, but you’ll be doing a lot of dragging and dropping as you interact with the different objects on-screen. As with most point and clicks, it feels more intuitive when done with your finger. Removing the JoyCon makes it a nice tablet game, or you could even prop it up using the kickstand.

Overall, while it’s not particularly long or difficult, There Is No Game: Wrong Dimension is a sleek, well-presented adventure game, with a bunch of gaming references and tropes turned on their head, and plenty of laughs as a result. It’s a fun romp with some unexpected twists and turns, and one that isn’t afraid to shift up its gameplay style at a moment’s notice, to the point where it doesn’t really even feel like a point and click, but rather just a rogue experiment that you intervene in along the way. I’d definitely recommend this one to fans of irreverent, paradoxical titles such as The Stanley Parable.

A hilarious point-and-click presented seamlessly, There Is No Game parodies a cavalcade of video game genres in its futile attempt to stop you from playing even one. Fans of absurd, paradoxical humour will get a kick out of this one.