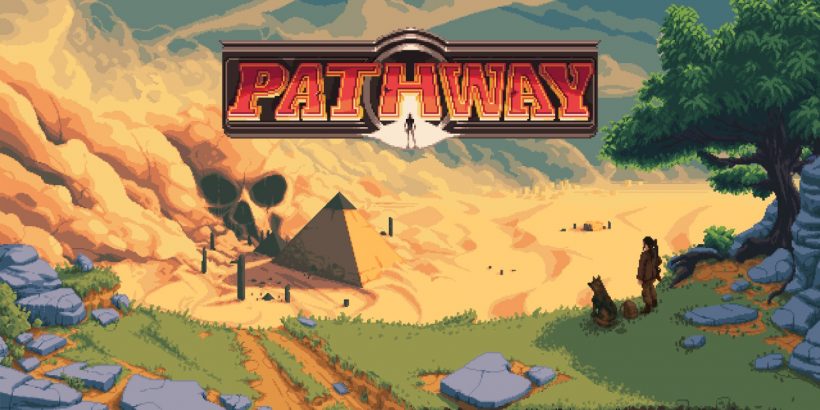 Are you ready for some classic adventuring? Daring missions across an untamed landscape, featuring the thrill of ambushing the enemy while gathering up some treasure along the way? Pathway is a video game dipped in board game DNA that also takes inspiration from stories that many of us have experienced on the big screen, a classic tale of good and evil.

Pathway offers up a turn-based strategy game with a sprinkling of rogue-lite elements, all charmingly presented within the context of daring adventures that wouldn’t look out of place in an Indiana Jones movie. The influence is unavoidably evident in the setting: the dry deserts of 1930s Middle East, the Nazi opposition up to dastardly deeds, and the dramatic orchestration of the soundtrack all recall the adventures of cinema’s most iconic professor of archaeology.

Before the adventure can begin, you must pick your team. Initially, only a small handful are available to choose from, each with different attributes, although others unlock throughout the course of the game when certain conditions are met. There’s quite a meaty selection of stats for each character, with familiar RPG labels such as agility, dexterity, and intelligence, and additional skills (and skill trees) as well as individual perks and starter equipment. These attributes can be quite specific in their usage, too – a certain character may have an increase in firepower damage only when a particular weapon is used, for example. It’s a good idea to ensure that your team includes a good mix of skills.

There are five different scenarios of escalating difficulty available in Pathway, including a dash through the Moroccan desert to rescue a friend abducted by Nazis, and a trek to foil a cultist plot to desecrate the sacred tomb of the Queen of Sheba. The game map – which acts like a playing board – features a series of nodes, each connected by strands that identify routes for your team’s jeep to navigate. At each branching point you can choose where to head next, although your fuel level depletes with each turn. In most cases, there is little indication of what’s at each location until you arrive at it. Were this a physical board game, you would be plucking an encounter card from a stack, and this is – in essence – the method that occurs here.

An encounter may result in an opportunity for bartering with a marketeer or exploring a derelict farmhouse for goods, or you may even stumble upon a German military camp. Some of these situations also offer a choice of whether to “play out” the scene or withdraw and avoid potential combat. Your decision may be swayed by the health of your characters at that point in time, or the amount of ammo you have remaining (every bullet counts in Pathway), or there might be an option that’s available because of a specific perk that one of your characters has. Each new game offers a different procedurally generated map, and so there is no shortage of playthroughs, although the assorted potential encounters are not infinite; like a board game, there will be inevitable repetition in events that occur, the more you play.

Combat takes place on a grid-based battle map, with each character in your team able to implement a limited number of actions before the enemy responds. Usually, you’ll be able to move and carry out some other action, whether that be a ranged attack, a punch or slash of a knife, reloading ammo, applying first aid, or “hunkering down” to avoid injury. If one of your characters loses all their health points, they’re out of the mission and will also be unavailable to choose on your next while they recuperate.

Losing one team member makes a mission harder to complete, although there are occasional opportunities to recruit a new member while travelling around on the map. Thankfully, equipment and skill tree advances are retained with each successive game, and so persistence will increase your chances of completing a mission, and therefore unlocking the next. The game becomes easier the more you play.

An occasional fault with the combat sections is that it’s not always apparent where the line of sight is for the enemy troops, or whether your characters are positioned behind cover. A board-based strategy game needs to have clarity in its layout, but this is not the case here. In an unfortunate nod to the game’s title, the pathways available on the map are sometimes obscured by walls and foliage to the extent that an enemy soldier may appear beside you, thanks to a shortcut that wasn’t easily identifiable. It’s by no means a consistent problem, but nevertheless, it’s frustrating when one of your characters takes an unexpected critical hit.

Pathway offers plenty of potential for repeated play for adventurers that wholly immerse themselves in the stats and scenarios on offer. The ‘Choose Your Own Adventure’ vibe combined with the exquisitely detailed pixel art are pluses, but the encounters can be repetitive. Pathway has grand ambitions, but the journey may not sustain long-term interest.

Pathway flexes plenty of stats amongst its RPG elements, but the turn-based combat can become quite repetitive. The presentation is gorgeous however, and there’s plenty of adventuring on offer if it’s the sort of ride you’re looking for.