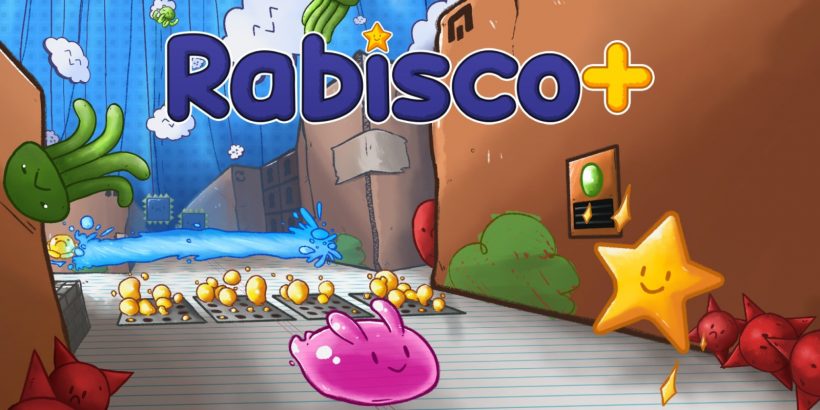 The moon is sad. The moon has lost its stars. Don’t think too hard about the astronomical inconsistencies at play here, it sets up a nice little precision puzzler with a cute, accessible challenge.

Controlling Ms. Rabisco, a ghostly, space-hopper-like creature, your mission is to reach the moon in each of one hundred levels. Levels contain various collectables to hunt down, and hazards to avoid while doing so.

Those levels get progressively harder, at quite a slow pace, so you’ll only find significant challenge about two-thirds of the way through. Rabisco+ is apparently inspired by The World’s Hardest Game, an old web-based game that utterly lives up to its title. Inspired it may be, but it’s nowhere near as difficult, although you’ll certainly recognise the gameplay.

Presented in a top-down view, your task is to navigate a handful of screens in each level, guided by arrows along the way. You’ll need to avoid spikes, collect keys to unlock closed-off sections, and generally find the best cluster of pixels to safely position yourself in. It’s an easy-to-understand gameplay loop that makes for perfect pick-up-and-put-down play, handheld or docked.

Other than standard directional controls, you have a speed boost at your disposal. It comes with a cooldown, so must be used wisely, and its required use under pressure is often put to great effect by the level design. Your main aim will always be obvious, and there’s plenty of useful information provided, especially during those early levels. This assistance verges on hand-holding at times and, with that shallow difficulty curve, the game’s playtime is short.

Part-way through, I realised what was so familiar about Rabisco+. Despite a different perspective, the game shares a number of mechanics with precision platformer Duck Souls+. Lasers locked behind doors, you-seeking missiles, even the clever enabling of the speed-run mode has been replicated.

Sure enough, it turns out the same studio — Green Dinosaur Games — is behind both. It’s a curious move, given the nature of the two games. Many elements transfer across, although others are omitted since they simply wouldn’t make sense in a top-down view. But the game introduces several unique items that take advantage of the format. One of the best features is the ‘shadow-reveal’: a section of the level is hidden in darkness, revealed only when you roll over a lightbulb. The darkness returns as soon as you move, so keen short-term memory is required in order to take the right route or avoid a particular obstacle.

For a game advertised as ‘difficult’, the presentation is surprisingly cutesy. The music is cheery and upbeat, and everything appears in a hand-drawn style, mimicking pencil on lined paper. In fact, the lines can help you position yourself to avoid the bad stuff, which is an excellent touch.

Although the game is simple and compact, a couple of concessions have been made in order to eke out a bit more gameplay. First off, the game is so well adapted for its speed-run mode that you could be forgiven for thinking it’s the main objective. Some levels effectively have their own built-in timers — those in which a murderous ghost chases you, for example. There’s also a challenge mode that is checkpoint-free.

All-in, it feels like Rabisco+ started off as a hardcore challenge that the developers didn’t have the heart to follow through on. They’ve softened its hardest edges and slapped on a friendly veneer. It makes for an enjoyable diversion, albeit a brief one.

Rabisco+ is an endearing precision puzzler. Although it’s short and a little on the easy side, it’s a very accessible game that plays great in handheld. Green Dinosaur Games has recycled its own prior work with much success.