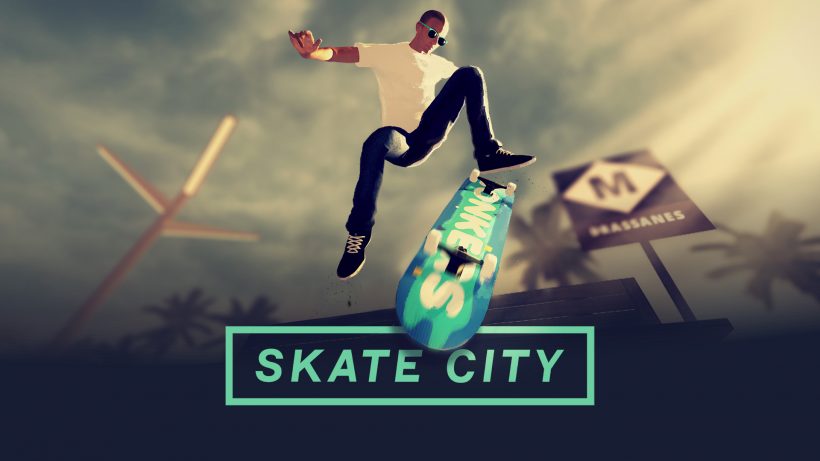 With OlliOlli World announced at the most recent Nindie World Showcase, the Tony Hawk’s Pro Skater remake from Vicarious Visions coming very soon, and even SkateBIRD on the horizon, there’s a slew of varied skateboarding games coming to Switch, each offering something different from the last.

Skate City from Agens (and publisher Snowman, the team behind Alto’s Adventure + Odyssey) appeals to the laid-back, chill vibe of skating in an urban environment, mixing a cool, lo-fi soundtrack with intuitive, simple gameplay and a sleek art style in order to really help you become one with your wheels.

‘On-rails’ seems like a fitting term to describe this skateboarding side-scroller, which has you rolling from left to right in three different major cities across the globe: LA, Oslo, and Barcelona. Each stage allows you to free roam the many obstacles and trick opportunities in an endless loop, with achievements and tasks to attempt at your own pace (not to mention the ability to record your own skating clips), but there’s also a slew of challenges to complete in each city, with a three-star rating to earn in each based on your score.

Challenges vary, from completing a specific line of tricks in quick succession to avoiding pedestrians by grinding and flipping around them, to even racing other skaters and avoiding the police. The process of jumping between levels and challenges feels snappy and quick to load, and the ability to restart a challenge in an instant by holding down a button makes the game’s bearings maintain the ideal momentum. The original lo-fi soundtrack bops away in the background at a steady pace, also helping to keep the wheels in motion.

Once you’ve earned enough coins through the many challenges, you’ll be able to purchase a range of different customisable options for your skater, and you’ll also need these points to improve your general stats, too, such as speed, balance, and spin. Having the game not feel as satisfying from the get-go due to these skill stats is a little risky, but it does feel super rewarding to increase the amount you can pop off the floor to give you more air over stair set, or the amount of speed you can rack up downhill when racing an opponent.

Skate City’s twin-stick-flick action is intuitive and satisfying, with each analogue stick movement representing a corresponding move or trick, and shoulder buttons allow you to twist and spin into grinds and slides across the urban landscape. The dev team has also gone to the trouble of incorporating the mobile version’s comprehensive touch control scheme too, allowing you to swipe and flick on different parts of the Switch’s display to pull off tricks. While it’s not as easy to control with taps and swipes as it might be on a slightly smaller phone screen, it’s always great to see the Switch’s hardware getting used to its full potential.

Overall, Skate City is a relaxed, stripped-back skating experience on Switch that seems to balance somewhere in the middle between overly simplistic indie and big punk-rock action sports title. It doesn’t reinvent the wheel, but it does let you customise it in a variety of different ways, and with its sleek aesthetic, it makes for a great palate cleanser for gamers that don’t want to horse around too much before Pro Skater arrives.

It’s so easy to jump into and play in short bursts that I can see myself going back to it quite often — when I just want to sit back and grind something out.

Balancing a 50/50 between overly simple indie and pro skater itself, Skate City doesn’t offer anything we haven’t seen before. However, its intuitive controls, presentation, and overall flow of gameplay make it endlessly replayable.