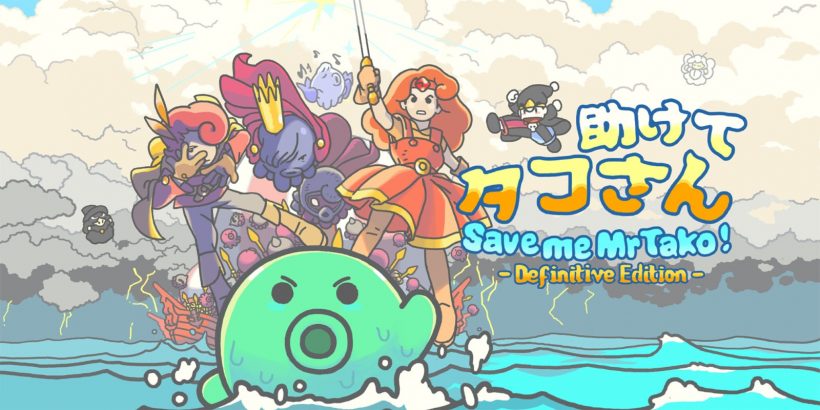 Until Nintendo grants the long-standing wish of many and adds Game Boy titles to NSO, a sub-genre of indie games works hard to fill the gap. Games such as Dogurai, Pixboy, and Radio Squid have attempted, with varying degrees of success, to recreate the monochrome magic.

Although we reviewed the game back in 2018, this Definitive Edition has quite a history. Save Me Mr Tako! was published by Nicalis, but failed to sell in the kind of volume they hoped for. When developer Christophe Galati presented a patch, designed to address some of the flaws that were holding Mr Tako back, the publisher refused to release it. Galati wrestled back control of his game, but has had to work from the ground-up, essentially selling Mr Tako as a brand new release.

So, to the meat (calamari?) of the game itself. Like Radio Squid, Save Me Mr Tako! features delightful cephalopod-centric gameplay. Mr Tako is an adorable octopus, full of character. It’s impressive how much personality is packed into so few pixels. Tako expresses delight, shock, and tiredness with hilarious accuracy.

On the other hand, the colouring can sometimes go a little overboard. The game presents its levels in a 4-colour style, with many different palettes from one to the next. Some of these can only be described as garish. Palette settings help make up for this, though, and the game’s selection of border images provides plenty of visual customisation.

Tako’s story is an elaborate and original tale of inter-species conflict. Octopi and Humans are battling it out, but Mr Tako wants none of this — he’s a peacenik, and I love him all the more for it! The plot gets played out with many twists and stories on the side, with a decent amount of depth. A vast number of NPCs and quantity of dialog helps underpin the storyline.

But Mr Tako embodies the Game Boy aesthetic best in its gameplay. The first things you’ll notice are the jump mechanics, for good and bad. On the plus side, there’s a bizarre but inventive mechanism that allows Tako to clamber over the edge of platforms, extending his overall jump reach. Unfortunately, the jump sometimes behaves erratically, especially when jumping near the edge of a platform.

Mr Tako’s main attack is, inevitably, ink-squirting. Spray ink all over an enemy, and they’ll stop in their tracks. Most enemies suspended in this way can then be used as platforms, often to reach inaccessible areas or power-ups. Even more fun, you can push frozen enemies around, including off cliffs. Mr Tako may be a pacifist when it comes to humans, but he/you sure can be mean to birds, seals, and tortoises!

Save Me Mr Tako’s levels feel much more numerous than they really are. Interspersed amongst the fifty is a series of cut-scenes and connecting areas which give the game a truly expansive sense.

So what extra does this definitive edition bring to the table? Alongside some cosmetic changes, the real tweaks are to the game’s difficulty. Make no mistake, at its hardest Mr Tako is a punishing game that will have you cursing. It’s not just the single-hit deaths, but the blind jumps and tricky enemy movements that conspire to create quite a tough challenge. A new mode gives more lives and three hits until you lose one, which mitigates much of the frustration.

Mr Tako is a game chock-full of personality and obvious love for a particular style of gaming, but it does remain something of an acquired taste. Game Boy fans will no doubt revel in all its nostalgia. Those brought up on modern gaming may struggle to see the appeal.

Fans of retro gaming will revel in Mr Tako’s adorable take on Game Boy style and gameplay. But, despite its qualities, and some well-delivered polish, this game may struggle to win over modern gamers.