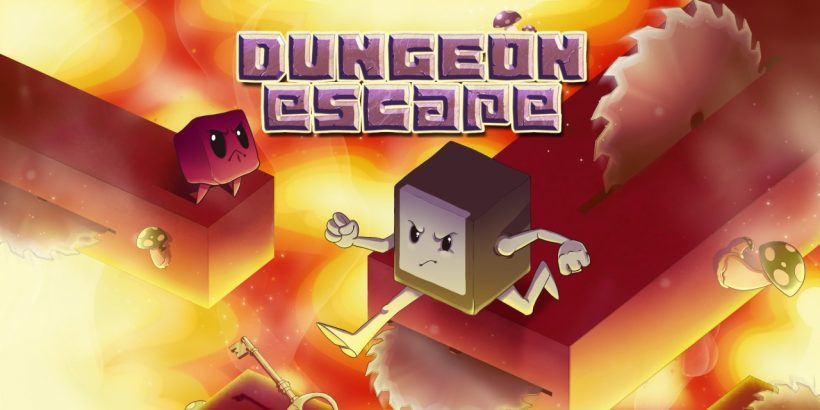 This spawn of Super Meat Boy and 8-bit classic Manic Miner is utterly playable and painful in equal measure. Close to being a perfect game in its niche genre, it’s just a shame that a few flaws hold it back.

Dungeon Escape is a straightforward game, a single-screen, fifty-level platformer. In each level, you’re tasked with collecting a key, then making your way to the exit door. You’re equipped with a double jump and that’s about it.

The weighting of the main character provides a wide range of movement, and the double jump is a well-chosen mechanic to build this type of game around. The level design makes full use of this range and incorporates precision jumping, timing, and mild combat of the jumping-on-heads variety. The difficulty curve feels very pleasant, although things get punishing pretty quickly. But you’d expect that with this type of game. The gameplay loop is supported with fast restarts, infinite lives, and level select allowing you to replay anything you’ve completed.

There’s something satisfying about a single-screen platformer. Maybe it’s that everything is in view, so there’s no misunderstanding the task. Each screen offers a perfectly sized amount of jumping, stomping, and flailing-about action. Dungeon Escape looks great, too, with strong contrast and simple pixel graphics combining to create attractive, appealing stages. It’s all very functional, leaving you to get on with the task at hand.

Unfortunately, this pragmatic approach has some downsides. Dungeon Escape concentrates on its core but neglects to work out some of the kinks elsewhere. These flaws are mostly things missing than actual problems with the game, but they add up and, unfortunately, hold Dungeon Escape back from being an unqualified recommendation.

Take the main character. You’re a cute yellow square, almost the exact size and shape you’d dream of for a pixel-perfect platformer. But you also have a black outline a couple of pixels thick which, as far as I can tell, is subject to collision detection. This might not be so bad were it not for the many levels with a dark background which make it much harder to see your own hitbox.

Coins in a platformer usually tempt or guide players and, in Dungeon Escape, they’re often used as markers of optional routes. But there’s no recording of coin-collecting outside of your score, nothing to tell you which levels you might’ve missed some coins from. And your score inexplicably increases if you replay levels, so even that isn’t really a marker of how well you’ve done.

There’s no speed-run mode, although the game is screaming out for one. There’s no customisation or unlockable features or level editor or anything at all beyond the basic gameplay. This is where the game really feels like it sticks too much to the old formula without adding any modern features from the past 30 years, beyond the infinite lives and quick restart.

Maybe, given the low price, this is all forgivable. Dungeon Escape is good value for money. I’ve seen people mention some of the ‘gotcha’ elements — hidden spikes, invisible sawmill triggers — as negatives, but I didn’t find these an issue. They were there simply to add to the challenge. They were pretty funny sometimes, too!

But some of the required tweaks seem so basic, and obvious, that they really mean the game doesn’t deserve the highest of scores. If you adore Super Meat Boy, and are looking for a bite-sized spin-off, Dungeon Escape will certainly do the trick. I really hope this game gets a patch with some quality of life updates soon.

Dungeon Escape is a game that absolutely nails its core concept and mechanics, resulting in a very playable, addictive, and positively frustrating experience. Unfortunately, there’s very little added value, and some flaws prevent it from being an essential purchase.