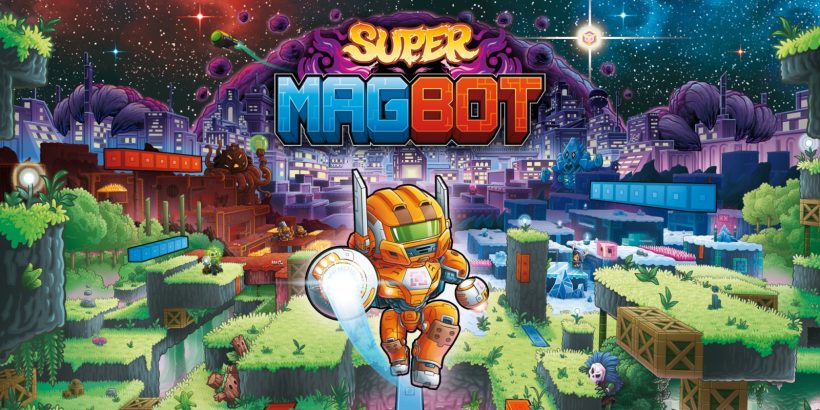 Here’s something we don’t see very often: a platform game with no jump button. Thank goodness that the Magbot of the title can utilise its own magnetic beams to propel itself around, or otherwise this would be a very brief adventure. Blue and red magnets are positioned around each level, and by zapping these magnets either with your blue beam (via the left trigger) or the red beam (on the right trigger) you can gravitate towards or push away from a magnet.

It’s a clever control system that initially had my brain frazzled as I tried to coordinate my movements correctly; the left thumbstick to run left and right, the right thumbstick to aim your magnet beam, and the trigger buttons to choose which magnetic polarity – positive or negative – that you want to emit. Initially it’s the video game equivalent of rubbing your tummy while patting your head, but the game goes out of its way to offer an accessible learning curve, with on-screen hints and assist options if you’re finding things too hard.

There is a plot offered up in the form of cut scenes between levels, involving the retrieval of star fragments scattered throughout the land, and the need to avoid them falling into the hands of the evil Magsterdroid. You don’t need to dwell on it too much however, as it’s the puzzle platforming that takes centre-stage, with the task being to guide your avatar to the fragment before proceeding to the next level.

As the game progresses, your acrobatic skills will truly be tested. Although it’s a platformer at heart, guiding the Magbot successfully to a star fragment is actually reminiscent of a rhythm action game. Once you’ve become accustomed to the controls you’ll be timing trigger button presses to the split-second, as you are propelled around the screen, landing from colour-coded magnet to magnet. As you would expect, the challenge becomes tougher as the story continues, with plenty of sheer drops, sharp discs, and deadly spikes to avoid. A later environment introduces that gaming classic slippy slidey surfaces to the mix, which gives the player even less time to react as the Magbot traverses the landscape.

When you are at your best, completing a level can take less than 20 seconds, but more often you’ll be attempting the same screen again and again, fine-tuning your movement each time in the hope that this time you’ll be successful. Lives are unlimited and restarting is instantaneous, and so the temptation is there to have just one more go. Super Magbot is addictive for all the right reasons, although the later levels will truly push your skills to the limit with no room for error. Mid-level restart checkpoints are one of the optional assist tweaks available, and my nerves found these to be quite a godsend.

If you wish to challenge yourself further, there are bonus fragments to grab on each screen which require a little more thought to reach. There’s also the lure of beating your best completion time; speedrunners will enjoy the fact that Super Magbot records your fastest efforts on each level.

Visually, Super Magbot successfully uses its minutely-detailed 2D pixel landscape to clearly indicate where you are heading, and how you can potentially get there, and there’s a colour blind mode for players who are visually impaired. The jaunty tunes that accompany the action manage to avoid being a grind to listen to, which is quite an achievement when you’ve died multiple times in a matter of seconds. It becomes brutally hard, but Super Magbot offers a satisfying challenge.

Super Magbot rewards perseverance. Initially the challenge is daunting, but when the rhythm clicks, you’ll be darting back and forth with a grin. The retro visuals are matched with a refreshingly unique control system to create a tough but addictive journey.