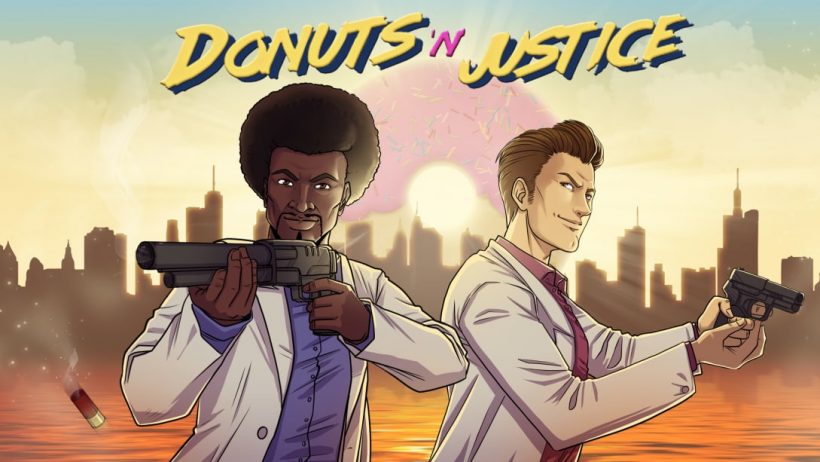 Film and TV have taught us that the absolute best time to be a cop was in the 80s. Big hair, even bigger weapons, and a general enthusiasm to take down local drug lords with your partner by your side. The likes of Lethal Weapon, Tango & Cash, and, of course, Miami Vice, are all indicative of the buddy cop ethos that Donuts‘n’Justice quite clearly is looking to ape. It sometimes works, especially when you and a friend break off a Joy-Con each to shoot endless perps as crime-fighting duo Mike Riggs and Nick Gordon. The shoot-em-up action is fun for a little while, but the overt 1980s faithfulness can’t make up for unfair challenges and a short length.

After getting over the initial disappointment that our two central heroes weren’t actually named Donuts and Justice, I got to work dispatching biker gangs, Yakuza thugs and even more crazy foes with a variety of weapons. Developer FobTi interactive has made a game that’s at its best when not taking itself too seriously in sequences like this, challenging you to unleash bullets both in front and behind you while trying not to get caught off guard. You also have to be careful not to get hit, which can be tough considering the number of enemies Donuts‘n’Justice constantly throws at you.

That last aspect of challenge is forgivable because it’s indicative of the shoot-em-up/bullet hell genre, but less so is how saving civilians is handled. You see, beating stages is not just as simple as spraying and praying. To achieve a full three-star rating, you must also avoid shooting passers-by – a tall order as they constantly swerve in and out of your firing line. This isn’t so bad in easy mode when it simply decreases your score. On the standard difficulty setting, though, killing an innocent jams up your gun and leaves you out in the open. Having the people you’re trying to protect also play into the challenge is a great idea on paper, but in practice it’s annoying and dampens the chaos.

Donuts‘n’Justice looks good, at least, and has a great sense of style. Sure, all the action is rendered in low-fi 2D pixel art, yet the vibrant colours help draw you into the maniacal bullet hell that constantly plays out on screen. It’s clear this is the effort of a small indie team, and they’ve done well to capture the 80s trademark aesthetic with such a minimal amount of detail. However, one element where having limited resources has held it back is in length. Comprised of five main levels and a handful of bosses stages, Donuts‘n’Justice can be beaten relatively easily in a single sitting.

Such a short playtime is likely the reason the game throws quite a lot at you from the second stage onwards, hoping to stall your progress by piling in hordes of enemies and lots of awkwardly placed civilians. Thankfully, there is a boss rush mode waiting for you after you complete the brief campaign, and being able to customize Riggs and Gordon with a selection of hats helps play into the game’s self-aware nature.

Donuts‘n’Justice is a fun co-op shoot-em-up that somewhat lets you and a friend live out your own 80s buddy cop fantasy. However, a few poor gameplay design decisions seem cruel instead of creative, and a criminally short length leaves you wanting for more (and not in a good way). That’s not to say there’s no joy to be had from facing off against ninjas, bikers, and yes, even sentient donuts as a pair of super-cops. Far from it. Just that the finished product doesn’t quite up to the lofty legacy of its Hollywood inspirations.

The premise behind Donuts‘n’Justice is undoubtedly solid, but any campiness ends up being short-lived, and there’s not enough meat on the bone for these supercops to chow down on. Sadly, these lethal weapons often need a holster.