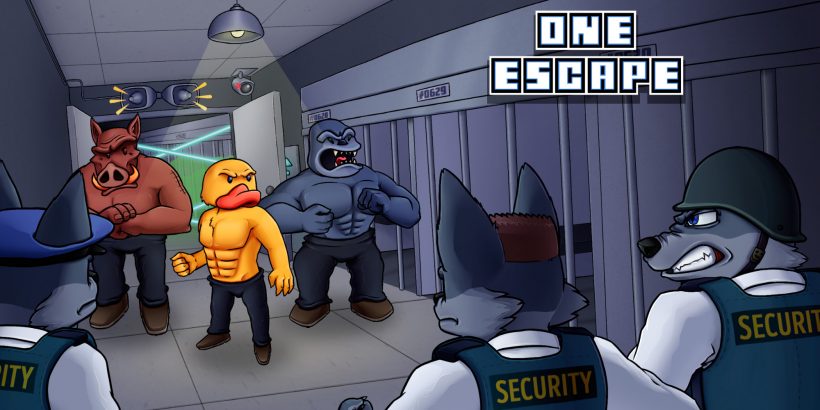 One Escape is a puzzle platformer set in a series of 60 prison-based levels. After being caught robbing a bank, a duck, a gorilla and a pig attempt to break out of jail, and it’s up to you to guide them to freedom. Imagine the show Prison Break if the cast was replaced by buff, bipedal animals.

The concept is simple and appealing, with a lot of potential for creative puzzles and challenges. It’s not entirely original, as we’ve seen plenty of prison escapes in video games before, but One Escape has a certain retro charm that stands out. The characters have fun designs, and the level design is initially pleasing, with an array of obstacles like toxic gas, cameras, and deadly electricity.

I appreciated the range of characters here, like the burly gorilla who can climb up walls. The hog can move crates and punch guards, giving you a satisfying chance to fight back. The duck doesn’t really have any special abilities though, which feels like a wasted opportunity.

One Escape also features stealth mechanics such as hiding in vents or dark walls to avoid guards. Choosing when to make your move, as the guards patrol back and forth, is one of the main puzzles you’ll face throughout the game. If you’re seen by a camera, alarms will sound as guards swarm the corridors, preventing further progress.

But, unfortunately, the game gets tiresome fast. Much of your time in One Escape will be spent waiting in darkness for things to happen, then doing it again as you’re forced to backtrack through the same section of the level. You can’t really get creative or try different strategies, but you’ll have to repeat the same tasks time and time again. None of the levels are very memorable, and none of them offer much engagement beyond avoiding obstacles. There are a few collectibles, but only a minority are hidden or hard to obtain. They just kind of sit there on the normal path, waiting for you to stumble across them.

Being such a cheap game means One Escape might get away with basic gameplay and still be worth picking up, but its problems don’t just end at the player’s lack of agency. There’s a sense of frustration in some of the later levels too, and not because they’re significantly harder than the rest. The puzzles remain simple but the levels only get longer, and one slip up near the end of one will send you right back to the start.

Often I’d find myself cruising through a level only to make one mistake right at the end, forcing me to repeat everything I’d just done. This wouldn’t be so bad if the puzzles weren’t so mundane, but slowly moving boxes around or waiting for guards to shift past me quickly became tedious and annoying the more I did it.

Repetition plagues every corner of One Escape, from the boring backtracking to the bland puzzles. The gorilla’s levels are easily the most fun, but they can still cause some irritation at times. The duck levels are the least enjoyable, offering nothing unique compared to the other two characters. I was stuck on one of them for far too long since it forced me to use a rather pointless feature I’d never used outside of that single level (triggering an alarm on purpose, then just waiting a while for it to stop). Others simply drag on and fail to properly engage the player. Overall, the level design in One Escape leaves a lot to be desired.

I wanted to like One Escape, but a cheap puzzle platformer like this should be a quick burst of fun, not a frustrating slog. It could have been a solid game with a few more engaging ideas, but its repetitive nature sadly holds it back.

One Escape is a mildly charming but ultimately disappointing game, with a few too many frustrating elements to make it worth a purchase. It’s not criminal, but it is pretty underwhelming.