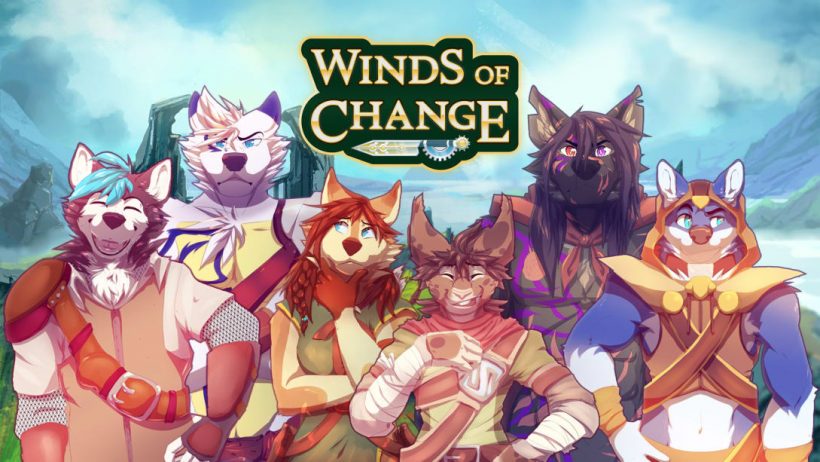 Do you love a nice breeze on a hot day? Wind spreads seeds and brings life; it can also bring tempests, tornadoes, and tsunamis that cause damage, destruction, and death.

What this all has in common is change. The wind changes the world around it, and the recent release of Winds of Change has imbued that vibe into a visual novel. Fans of furries rejoice, the world of Alestia, where Winds of Change takes place, is inhabited by all manner of anthropomorphic animals to befriend and romance.

“I have…amnesia!” You wake up and your beloved village is on fire. There is screaming and fighting and you can’t even remember who you are, let alone what is going on around you. While it may sound like the start of one big cliché, Winds of Change manages to turn it around and make it more interesting. As you flee the carnage, one of your companions informs you that you are the village’s sacred Seeress (or Seer depending on player choice), and that this is a vision. Armed with the knowledge that what you are seeing isn’t real, you walk through the intro of the game gathering info to prevent this awful possible future. After telling the village elder about the horrible vision, he sends you and your companions on a mission to save not only your humble village, but all of Alestia.

In terms of gameplay mechanics, because it is a visual novel the main interaction involves pressing A to advance the text. There’s also a map screen to move from one plot location to the next in order to advance the story. And several icons on the main HUD of your screen allow you to watch scenes with the various other characters in the game. The characters are very well written, and they all have desires, goals, and baggage to deal with. Every line of dialogue is fully voiced, and the voice acting is excellent.

One of the best parts of Winds of Change is that character side stories can be explored, allowing you to witness what the other characters are doing while the Seeress is not there. From the main antagonists of the story, to characters you haven’t even met yet, players become omniscient and are privy to more information than the Seer whose shoes they are filling. This really allows the player to connect with the fuzzy faces around them, and can influence the choices made throughout the game.

There is a purity/corruption meter, and since the Seeress has been given extraordinary power by the spirits of Alestia, it’s up to you to resolve all major decisions and arguments. For example: turn a well-positioned pub into a barracks for the Rebellion, or leave it the way it is? These tough decisions will change the course of the story, the dialogue between you and the characters, and your ratio of purity and corruption. Choose wisely!

Occasionally, the interpersonal relationship building can be a bit overwhelming. There were times when I only wanted to be friends, but the only options were to flirt or not; then when choosing not to flirt, the characters get sad and defensive. This would be fine if the game didn’t specifically provide a dire warning that building a relationship, and completing each character’s special quest, can impact the whole story! The load times between scenes are a bit longer than one would desire from a visual novel, but it’s not enough to become too annoying.

In summary, Winds of Change has a lot to keep players entertained for hours. The story is engrossing, and the characters are well-written and expertly voiced. If you’re a fan of epic fantasy, this visual novel will not disappoint.

Winds of Change is a visual novel that presents players with an intricate and intertwining high-fantasy narrative full of twists and turns. With an eclectic cast of anthropomorphic animal characters, this visual novel will satisfy story lovers and animal lovers alike.