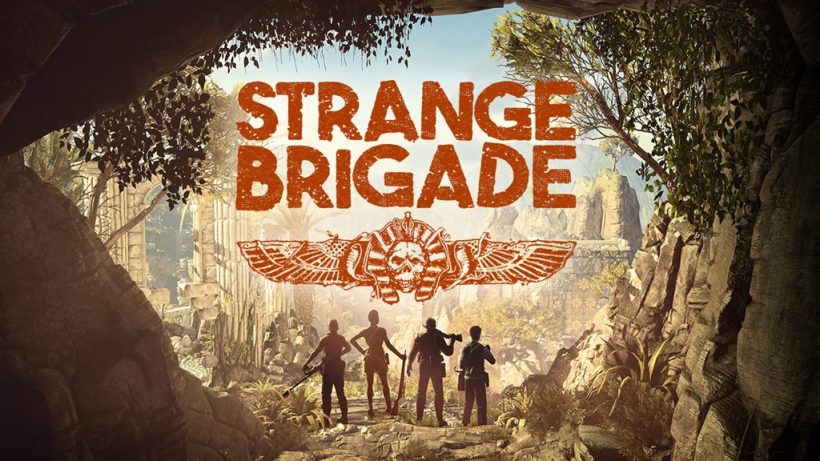 Originally released back in 2018 for PC, Playstation 4, and Xbox One, Strange Brigade has finally made its way onto the Nintendo Switch. But does it handle itself on the small screen? Well, Rebellion (the team behind the Sniper Elite series) are certainly pushing this third-person, co-op shooter to its limits.

Strange Brigade is a third-person, co-op adventure game heavily inspired by 1930s Egypt. The game sees you playing as one of four characters: Frank Fairburne, Prof. Archimedes De Quincey, Gracie Braithwaite and Nalangu Rushida. There are five other characters, but they can only be unlocked by purchasing the DLC. Each of these characters has their own unique style and special ability. From the outset, each character has their own unique loadout, but this can thankfully be changed in-game. It’s a case of finding out what works for you.

In terms of special abilities (known as Passive Abilities in-game), there are some interesting ones to make use of. Each character has two passive abilities and a potent amulet power which is used by gathering the souls of the enemies you have killed. These amulet powers can be upgraded using skill points. Again, it’s about finding out what style of play you prefer. I ended up favouring Frank because he has a power called ‘Super Headshots’ which make headshot damage a lot higher and also have a chance to cause a blast when you get one. Awesome.

The story is pretty simple and, honestly, it’s very forgettable. Seteki, the Witch Queen, has risen from her Tomb some four thousand years after being buried, bringing with her some undead friends. Only a troop of heroes known as the Strange Brigade can stop them! Going through the campaign follows a progression of defeating hordes of enemies, solving puzzles, and collecting artefacts. In these terms, it’s a simple and repetitive game. But it’s still a lot of fun.

Strange Brigade does offer players a few different game modes to sink their teeth into, other than the Campaign. Firstly, we have the pretty self-explanatory Horde mode. This is where the player (or players) face an onslaught of enemies through waves. It reminds me of the Call of Duty Zombie mode since you can purchase random weapons via crates. You can also use currency to open various doors. Let me tell you, this mode is best for playing with as many players as possible because it is tough. The other game mode available to you is Score Attack. This mode is all about defeating enemies as quickly as possible, to get a high score.

All these game modes are playable in local or online co-op too which is a bonus. I had the chance to test out multiplayer mode with our very own Shaun Hughes and we found it stood up quite well. It’s clear that the game sacrifices graphics for performance, and neither is particularly perfect as a result. The game outputs at 30fps with 1080p docked and 720p in handheld. But it still looks a little rough around the edges. I was surprised to see that the frame rate wasn’t affected at all whilst playing. Not even with a hundred enemies on screen and explosions going off!

I would have liked a little more choice when it came to your loadout. With just four main guns (a shotgun, bolt-action rifle, submachine gun, and an automatic rifle) your options are a little limited. There are more weapons you can use, but these are ‘special’ weapons that you get from chests for only a limited time. All of your main weapons can be upgraded to provide a variety of buffs by collecting gems. Gems can be found in chests around the levels and each one offers a different bonus such as healing when killing enemies and weapons dealing more damage.

You also have the choice of several grenades and a side-arm which is just a pistol with unlimited ammo — good for when you’re faced with a lot of enemies with no ammo. Your grenades take a different approach though. Instead of having a set number to carry, each time you use one it will have to recharge before you can use it again. It doesn’t take long, which is just as well because it helps to clear large groups of enemies.

Perhaps my favourite thing about Strange Brigade is the narration. The narrator is witty and funny, and brings a lot of personality to the game. The game would certainly be a lot duller without his presence.

Of course, you’re not alone on your journey, and there are many undead enemies that will be relentless. As you progress, the enemies become tougher. The main enemy is the basic Mummy; they’re pretty slow and easy to kill. There are also giant scorpions, skeletons, and ghouls, among others. You’re going to need to learn each of the enemies’ moves to learn how to best defeat them.

There are also a number of collectables throughout the levels but, unlike most games I’ve played, a distinct sound arises when you are near to one. These audible alerts cause you to stop in your tracks and look around, because you know the goodies are nearby. This is a refreshing way to approach collectables as they would be easily missed otherwise.

Overall, Strange Brigade offers some exciting gameplay, but if you have access to another console, I’d recommend you experience it on that.

Strange Brigade is a fun and exciting game that’s much better experienced with friends than alone. It does sacrifice graphics for performance and, although that’s not a bad thing, it would have been nice to have seen it not looking so dated.