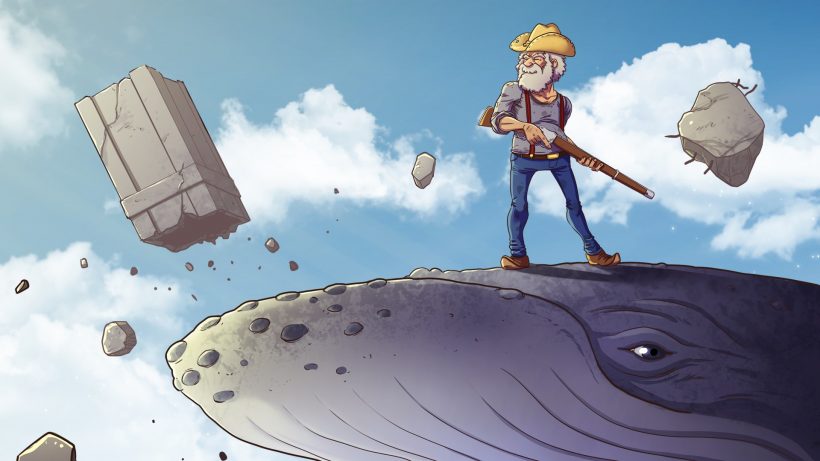 Gutwhale is quite clearly inspired by the likes of Super Meat Boy and The Binding of Isaac. However, where those games double down on a unique twist on the platforming genre, Gutwhale fails to find its footing and ultimately feels like a short, sweet attempt to reach the lofty heights of the titles it attempts to emulate.

The core gameplay in Gutwhale is simple. You control a character with a big gun, in the belly of a decaying, flying whale, and must battle your way out of its putrid flesh. Levels are made up of randomly generated floors filled with enemies. Once each enemy is dead, the floor disappears, and you fall to the next one. There are around five floors per level, and enemy variety and combinations become increasingly challenging as you advance. The protagonist has a health pool, and once that runs out, you restart from the first floor of the first level.

Kills award points, and you’ll need those to buy items from the shop between levels. For example, you could pick up a new hat, expand your health with an extra heart, purchase some additional shells, or buy nothing at all, for the chance of having more points at the end of the next level. Your gun starts out with a single shell that you have to collect after hitting an enemy or the wall. This makes running and gunning impossible since you’ll find yourself vaulting over enemies or sliding under them between shots to recover your shell and kill the next creature, just in the nick of time. When you’re damaged, your character dies. This removes a single heart and respawns the character on the same floor. The shell dropped before your death also remains, making it easier to move around the remaining floors and take out each enemy.

The twist on traditional platforming shooters here is that the protagonist can wear assorted hats that provide various buffs and debuffs. For example, the Cool Hat provides more points for your actions at the cost of all but one heart, while the Workout Hat offers two hearts and increases your mobility. In addition, you can unlock the Frog Hat to transform every enemy in the game into frogs, though it’s hard to say if this makes progression easier or more difficult.

While the game has a great soundtrack that keeps you on the edge of your seat, adrenaline pulsing through your veins to the beat of the techno music that also shreds your nerves, there’s little more to this game. The hats feel as though they’re the base of an ambitious item system that was never fully implemented, with less than ten in the entire game, and there’s no way to learn the levels to master them. While death in Super Meat Boy is often a learning experience, revealing more about each level and making the game easier, death in Gutwhale is purely frustrating. With randomly generated floors, the only thing you can learn from repeated attempts is that sometimes the game generates impossible floors where enemies stampede from either side and murder you before you can pick up your shell.

If you power through in a single session, you’ll see everything Gutwhale has to offer in under an hour. Including the secret ending. It feels like a demo for what could be a much larger game, one that would be brilliant and right up the alley of any fans of The Binding of Isaac. As it is, though, Gutwhale is a challenge to be conquered. There’s some replayability after you first complete it, with the introduction of achievements, but there are too few, and the game is so stressful to play that it doesn’t seem worth wasting your time attempting to get them. Ultimately, it does do a good job of making you feel like you’re in the gut of a whale though.

Gutwhale is an intense yet underwhelmingly short action platformer, offering an afternoon of frustrating fun with no real reason to return once you’ve finished it. Gameplay is tight and music pulse-pounding, but it feels like little more than a demo.