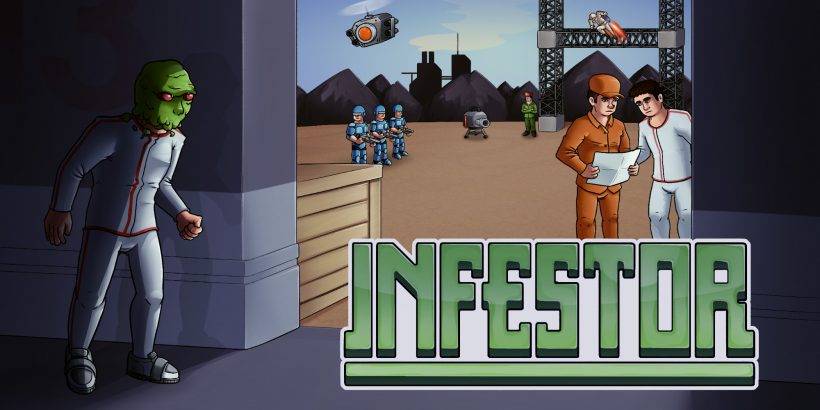 Here’s something we already knew: the human race’s greatest enemy is the human race. Rival factions that share our planet’s limited resources have turned to biological warfare to gain the upper hand on their opponents, resulting in the creation of the Infestor. This green blob – under your control – can sneak up on unsuspecting humans and leap onto their heads, borrowing their abilities for its own advantage. Its aim? Well, in simple terms, to reach the exit of each 2D platform level and thus progress to the next.

Infestor seems to take place in a rocky region with an abundance of metal platforms, sharp spikes, and gun turrets. The green blob can move left and right and jump a short distance while traversing this formulaic setting, but it’ll need to claim possession of some conveniently located humans to complete each level. And these humans are easy to possess. They stand around, waiting for your arrival, useless and potentially infectious.

Taking control of your next victim requires a simple tap of the Y button when you’re close enough to leap on to their head. The first human you meet – the base model, if you will – can jump a little further than the blob can alone, while a worker human can push crates to clear a path or to create a step up to another platform. An overseer, meanwhile, can unlock security doors, and a jet scout can use their jetpacks to jump twice. When a human is surplus to requirements, a tap of A will release the blob and expunge your former vessel in a half-hearted shower of pixels.

This premise of taking control of different characters to navigate puzzle-based platform gaming environments is an idea with a lot of potential but, unfortunately, in execution the game suffers from being far too easy and far too repetitive. A majority of the 70 levels can be completed in the first sitting, with little complexity to overcome.  The building blocks are present for an inventive challenge, but the route to success is too simplistic, too narrow in its margin of experimentation.

Occasionally a new idea is dropped into the mix — a new type of human being to exploit or a new danger to avoid — but each level is fairly small, with no hidden bonuses to find. Locations are served up with the same drab colour palette; the most vibrant part of the game is the blob itself, which has certainly been unlucky in being drafted into the least scenic part of Earth to infiltrate.

Offering an interesting variant of Super Mario Odyssey’s Cappy possession skills, Infestor has the potential to be a budget treat with pixelated charm. The controls are tight, and the little characters are nicely designed and have interesting quirks that could potentially form the basis of a solid challenge.

Unfortunately, however Infestor is just too easy, and the environments are too bland. There are moments of excitement; gaining control of a soldier for the first time led me to believe there would be some shooter thrills, alas not. But even at its low price, it’s hard to recommend Infestor unless you want to participate in a platform puzzler with little content to actually puzzle you. It’s like playing a succession of training levels, waiting to truly get started.

A sequel could build on the premise and enrich the task which, combined with the retro appeal of the character sprites and the chiptune music, would make it something worth infesting – I mean ‘investing’ — in. As things stand though, this is about as mundane as biological warfare can get.

The core concept of Infestor has potential. It could have been a quirky puzzle platformer, but there’s no challenge here. It’s far too easy, and there’s too little variation in what you’re required to do. Unfortunately, I’m recommending you avoid possession.