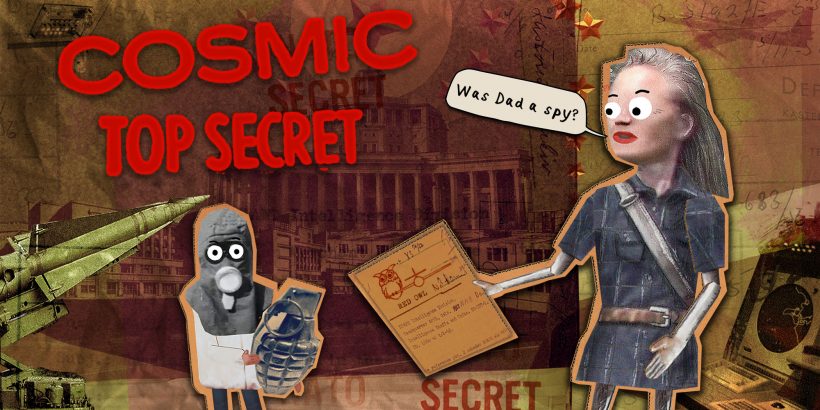 Whilst a deep dive into one family’s experiences in Cold War Danish Intelligence sounds more arthouse cinema than Nintendo eShop, that’s exactly what we get with Cosmic Top Secret. Here, documentary filmmaking meets the wonderful world of video games in this cosmically intriguing genre mashup. Billed as an autobiographical adventure game, Cosmic Top Secret follows the character ‘T’ in her quest to uncover exactly what her parents’ roles in that unstable time were.

With such a dense story to tell Cosmic Top Secret keeps the gameplay simplistic by comparison. You venture through a series of five levels, the goal in each to uncover various bits of intel to piece together the puzzle of your parents’ past. Most of these collectibles are placed in front of you as you journey through each level, especially those integral to advancing the main story, but it only takes some light exploration to uncover the rest. There are some obstacles to tackle, in the form of simple platforming sections and puzzles, but these will be cleared with ease by even the most inexperienced player. This level of simplicity works in service of the larger narrative yet begs the question as to why the story needed to be a game in the first place. I found I could dash through levels in a matter of minutes if dedicated enough and uncover most of what the level had to offer whilst doing so.

In fact, you’ll find the most challenging obstacle to completing the game is its controls. You move around at great speed as a crumpled paper ball. However, many sections of the game don’t lend themselves well to such a frenzied pace. Something as simple as traversing a thin path often ends in frustration as you speed off with the smallest tilt of the joystick and tumble into the abyss below. The jump button too is overly sensitive, and you’ll often find yourself overshooting what should be a straightforward jump. A small but nevertheless annoying quirk is the inability to reverse without moving the camera right round. I found myself wanting to backtrack just a little on numerous occasions and suddenly a two second task became a dizzying ordeal.

The gameplay in Cosmic Top Secret may indeed be lacking but it just about makes up for this with the engaging way it tells its story. I mentioned before how this could have been a straight up film, however it would have been one I doubt many would have watched. The story becomes enthralling because you’re the one uncovering it. Taking control of T, you’re playing detective, revealing long withheld secrets about not only her parents’ lives but hers as well. The game cleverly weaves together two intricate narratives that result in a surprisingly emotive ending. T and her parents all hold their secrets and the way you slowly unravel these has you deeply invested in their story in a way I don’t think a simple documentary could have done.

The game’s aesthetic, whilst at first confounding, also enriches the narrative. The papercraft style is quite unique. The googly eyes on the characters convey a goofy tone that feels somewhat at odds with the serious nature of the story, but the graphical style in general perfectly encapsulates the feel of the game. Throughout, you’re piecing together the story, sticking bits and pieces here and there like some gigantic crafts project. Further than that though, the style expresses the fragility that’s an ever-present theme throughout the story. Whenever T becomes overwhelmed or encounters an obstacle too great for her, she is torn apart and it’s on the player to piece her together again. It’s a stylistic approach that makes the game seem almost childish at first glance but in fact acts as a perfect amplification of the game’s main themes.

Whilst the papercraft style does lend the game its own unique flavour, it can’t help but feel slightly drab and lifeless at times. The game uses a very muted colour palette and due to the style, everything is straight edged and flat. Level 4 of the game felt like an attempt to move away from this as you unlock a mechanic allowing you to swap perspectives, however you simply shift between a dark black screen and a bright white screen, doing little to improve the murky feeling. Again, I feel this serves the narrative to an extent, but some levels felt like you were traversing the same grey section the entire time and could have used some more defining features.

Cosmic Top Secret tells an incredibly engaging story that explores the human cost of secrecy and war. At times bizarre, stick with it and you’ll walk away with a deeper understanding and appreciation for those who worked to ensure the Cold War stayed cold. The gameplay is incredibly simplistic and the controls at times frustrating, but the underlying sense of mystery and intrigue that builds throughout the game, as well as the way in which you help uncover the story, will soon have you overlooking its shortcomings. Honestly, the biggest secret about this game is why there aren’t more like it.

Cosmic Top Secret is an enjoyable and surprisingly educational experience that tells an interesting story. However, it’s held back by the limited gameplay on offer.