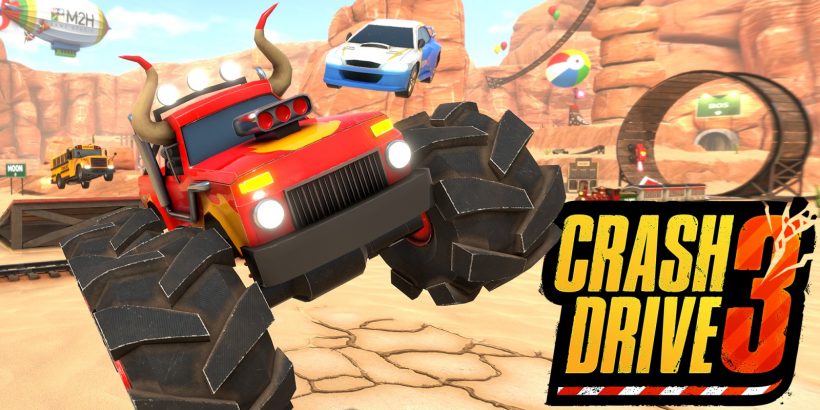 When it comes to party games, you could say the Switch is very well served.

From big titles such as Super Mario Party, 1-2 Switch, and the Just Dance series to incredible indie sensations like Snipperclips, Overcooked, and Ultimate Chicken Horse, there’s plenty of options for games that are better played together. It must be said, though: as much as some of these titles have online play as an option, they are arguably more suited (or at least more fun) to couch co-op sections. Crash Drive 3 comes as a counterpart to that, being an online-focused party-game

At first glance, when you take a look at its expansive maps full of ramps, loops, and other trick-inducing elements, you may remember the arena modes of classic stunt games such as Destruction Derby, and you may encounter part of that same feeling here. The difference is that the focus here isn’t really on the destruction of vehicles, but on the creative ways you can explore the maps on each of the game’s ten different game events.

When you start an online play, the game will match you with different racers. In my experience, the matchmaking is really solid, and its cross-play functionality does a great job in filling the arena, even when it needs to bring together players from different platforms. Once you’re inside the map, you can actually roam around freely, doing tricks that will earn you money, or searching for collectibles and other secrets. Inside this free-for-all environment, you can choose at any time if you want to engage with the current event.

There’s always a rotation of events happening. Every 30 seconds or so, all players get a message about what the next upcoming event is going to be, with a timer showing how long it will take to start. Then, it’s up to each player to decide if they’re engaging with the activity or not. With this free approach to how it presents its party elements, Crash Drive 3 is a great example of a game that you can easily fit in your schedule, because it is really easy to jump on quick sections for a few events.

The negative aspect of that structure lies in the fact that players have no control over which event they have to play. Generally speaking, the events can be very different from each other. They can be focused on racing, on doing tricks to get more points, on collecting items, or on taking control of a section of the map, just to mention a few. If you don’t like a specific event that’s currently running, you’ll need to wait. Maybe you will have luck and the next event is the one you want to play. Maybe not.

Thankfully, Crash Drive 3 has other activities to keep you occupied during the downtime between events. The way you progress through each level, for example, is actually built as an enjoyable trick challenge using collectibles. Each map features ten coloured rings that are positioned over ramps or other places that are tricky to access. You need to find your way through the map and collect at least eight of these rings to unlock the next map. With five maps in total, this is a recurrent challenge that encourages exploration. There’s even a special map that comes with an exclusive mode where you use tanks to fight on a platform. Unfortunately, though, despite bringing a unique experience, this is the less interesting mode available.

Another way that Crash Drive 3 finds to keep players occupied is by its car unlocking and upgrade systems. In addition to having different weights, which affect how you drive, each car also comes with its own set parameters, including different initial statuses for speed, acceleration, boost, and handling. The catch here lies in how you can improve each of these attributes using two methods. You can either spend cash to quickly max the car’s status, or you can choose to do so by driving and slowly increasing its statuses when running at max speed, using nitro, and so on.

With its mix of modes and several ways to keep players hooked, Crash Drive 3 presents an enjoyable driving experience that plays in an almost ideal way. The only thing that can, unfortunately, detract from the experience at times is the camera. Each time you try to drive backwards, you’ll need to deal with a slow and weird turning arch. As a consequence, it creates some frustrating moments in those game modes where you need to adjust your positioning quickly. At least, these are not too frequent.

As much as Crash Drive 3 presents itself as an online experience, it also has an offline mode, but it is mostly forgettable. Without an option to play with multiple players locally, this game mode puts you alone in the map, with the same events from the multiplayer, just slightly tweaked. With no other player to share the madness of the match, they end up being boring and repetitive.

In the end, if you look at Crash Drive 3 as an online-focused party game, you will find a pretty cool title here, with different game modes to keep you hooked. It is one of those games that works better in short bursts, especially if you use it as a palate cleanser between other experiences.

If you want to party with strangers, Crash Drive 3 is a great option for a party-like game that is mostly focused on online play. It has a good variety of modes and many unlockables to keep you hooked during short gaming sections.