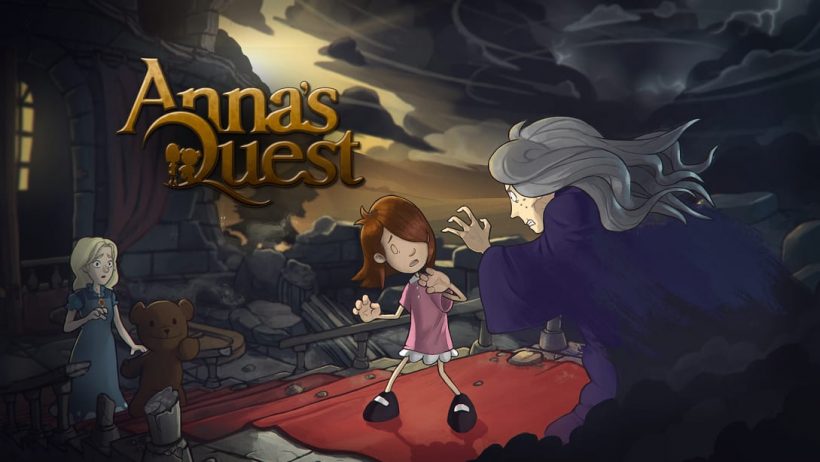 Gaming has an obsession with watching small, innocent children battle through horrifying situations. Limbo, Little Nightmares and its recent sequel, Yomawari, the list of games goes on and on. Loss of innocence is a big trope in story writing, akin to amnesia, but when it’s done well it can transcend trope.

Enter Anna’s Quest on Nintendo Switch. Anna is a little girl who has to leave the safety of her farm for the dark and dangerous world in order to save her sick grandfather. Her grandfather warned her of the cruelty of the outside world, but desperate times call for desperate measures.

As soon as she enters the forest, Anna is kidnapped by an old witch and locked in a tower. Thus our story begins as the witch makes Anna sit in an obviously suspicious chair. This chair, attached to an equally suspicious machine, ends up unlocking Anna’s latent telekinesis!

This quest comes in the form of a point and click adventure. These kinds of games normally don’t translate that well to consoles, as the use of an analog stick versus a mouse can make for a tedious experience. However, Anna’s Quest manages to simplify the experience by allowing players to either press L/R or flick the right analog stick to quickly scroll through interactable things.

While this is a great improvement over labourously moving a cursor all over the screen, it isn’t perfect. If Anna isn’t positioned properly interactive areas will not be an option to select. This doesn’t annoy when Anna is far away, or turned around, but it is slightly irritating when you have Anna positioned right next to something and you still can’t highlight the appropriate spot. Luckily, holding down the right analog stick will highlight every object that Anna can interact with, so players don’t have to worry about missing things arbitrarily.

The puzzles are logical and fun, and most importantly: they make sense. You won’t be needing a college-level understanding of trigonometry to help Anna on her way. That’s not to say it’s as easy as putting the square block into the square hole. Players will need their wits, along with a healthy dose of talking to NPC’s and hearing the descriptions of items in the inventory. Anna is a clever child, and she will comment on the various things you observe and interact with; make sure to listen, because this can provide helpful clues.

Speaking of listening: the whole game is delightfully voiced. All of the voice actors do a stellar job bringing the characters to life. From Anna’s positive innocence and determination, right down to the talking chicken. The same can be said for the artwork: very well done. The vibe of a cold, cruel world where there are a lot of evil people doing a lot of evil things (witches who eat children anyone?) is excellently conveyed through the artwork.

Overall, the developers have managed to create an engaging world and story for players, as Anna, to interact with. It is refreshing that Anna has a voice of her own, rather than being a sad, silent protagonist that we watch being tortured when we fail. Anna is gentle and kind, refuses to do harm for her own personal gain, and truly believes in the power of family and friendship. Rather than simply letting the dark world happen to her, Anna gets to go in and make it better.