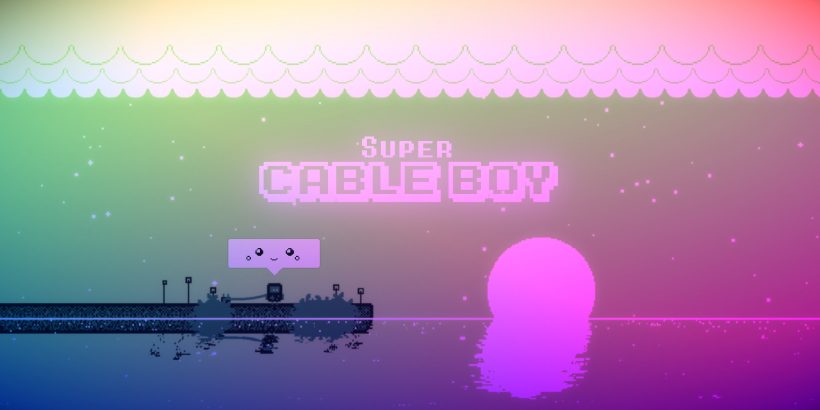 Playing through Super Cable Boy, I can only imagine that developer Sørb was, one day, visited by three spirits representing video gaming’s past, present, and future. It’s by far the most likely explanation for how a single developer was inspired to wrap a classic linear 2D platformer with homages to recent indie triumphs, and inject some much-needed innovation into the genre too.

Superficially, Super Cable Boy imitates Super Meat Boy. But rather than a slab of conscious meat, you’re in control of an adorable ickle Game Boy. Well, a generic-looking handheld gaming device which may as well be a Game Boy. The eponymous, permanently attached cable doesn’t really impact movement. But it does bounce around delightfully, and acts as Cable Boy’s means of accessing each level’s target, a socket. The game is full of geeky coding references, which are used to great metaphorical effect.

Super Cable Boy belongs to a genre of game we could call ‘art platformer’, alongside others such as Fez and Thomas Was Alone. The opening tutorial embodies this with a visual effect that controls how the landscape appears and disappears as you move around. Angular shapes fly in and out, assembling new platforms to land on, and the effect is mesmerising. Things only get more avant-garde as you progress through the seven main stages. Much of the weirdness revolves around the ‘glitch’, a device that provides plot points and functions as the main in-game hazard.

Like Fez’s bizarre 3D map, Cable Boy offers a level select screen that’s bordering on a work of art in its own right. The world spins and contorts as you select each level, other areas flying into view, ones and zeroes decorating the landscape. Each level is locked until you beat its predecessor, but you can navigate around stages freely for a sneak peek of what’s to come. Levels can be (re)played very quickly with this free-form navigation because the game wisely ditches the chore of physically walking your character around the map.

In both map and normal gameplay, Super Cable Boy shows off by layering visual effects on top of one another: blurred reflections, silhouettes, pointillist seas. The toned-down, muted graphics of the main map correspond with a kaleidoscope of colour throughout the levels themselves. Some of this decoration might risk distracting players, but Super Cable Boy always highlights possible routes clearly, even including subtle clues indicating where you’ll need to jump.

Super Cable Boy is not as linear as it might first seem. In addition to secret stages and optional levels, each level presents multiple paths to completion. Your motivation for tackling trickier paths is a collectable rice ball, each level containing up to two of them. Thankfully, especially early on, the easier path is very accessible, but the more challenging routes really take things up a notch. It’s left entirely to the player to decide how they want to enjoy this game.

Although there’s little room in the sprite for visual personality, Cable Boy often has cute and witty remarks to make. He also expresses emotion via a series of adorable emoticons. The rice balls, meanwhile, say nothing but “Onigiri!”, but they say it in a slightly different pitch each time which is a brilliant touch. The music, too, is a delight. What could have been yet another chiptune soundtrack is something more ethereal and electronic, complementing the core theme. One later track even has echoes of Hail to the Thief-era Radiohead.

Super Cable Boy really opens up when it introduces new mechanics via four collectable cartridges. These can be slipped into Cable Boy for a choice of main ability. The first upgrade — using your cable like a grappling hook — requires quite a few levels to be completed, but it has a dramatic effect on gameplay. That cable provides quite a bit of reach and opens up much larger areas for tricks involving swinging and building momentum. The remaining upgrades mix things up even more, borrowing ideas from games such as Hue and Celeste.

Predictably, Super Cable Boy gets much harder towards the end, but it also introduces mixed-mechanic levels. In these, you’ll need to switch carts to use the appropriate ability to progress. However, in keeping with its overall aesthetic, Super Cable Boy makes another spot-on choice by positioning coloured clouds which automatically set your ability for a section. This inspired move avoids lots of wasted experimentation time while retaining the variety — and challenge — of different mechanics. You can always try switching carts yourself, to see which parts of a level’s design you can bend or break to your benefit, but the game lends these helping hands when they’re most necessary.

Super Cable Boy succeeds because of its generosity. Yes, this is a game that gets challenging, but it always offers ways to mitigate the tough bits and often provides alternatives to them. It has many different ways to play, and layers some truly impressive effects and sounds over the classic platformer experience.

Super Cable Boy is a wonderful collection of contradictions: experimental yet familiar, accessible but challenging, linear with masses of choice. The game marries old and new elements of 2D platforming to near-perfection. A triumph stylistically, conceptually, and in execution.