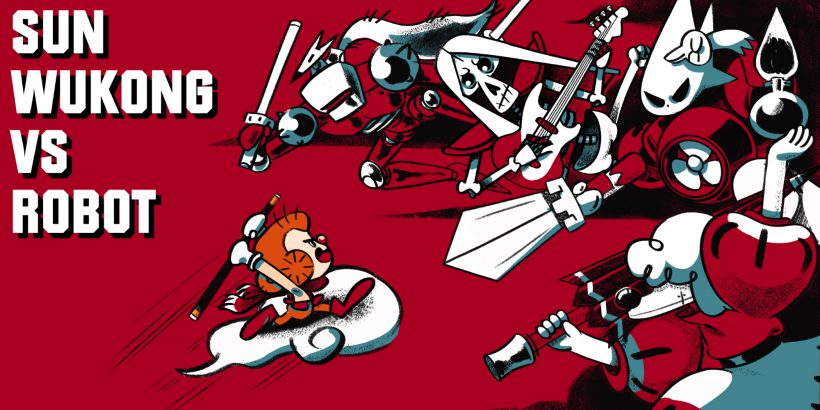 The Metroidvania subgenre of games is, ironically, far from an alien concept for most Switch players nowadays. From Hollow Knight to Axiom Verge, there is no shortage of fantastic modern indie takes on the formula, and with Metroid Dread on the horizon, it’s an extremely tough category to break into.

Interestingly, the shapeshifting monkey king Sun Wukong of Chinese folklore is no stranger to the video game format either, appearing as a playable character in the likes of Smite, Dota 2 and Fortnite. It seems the legend’s many different powers and abilities translate well into video game mechanics, and that is certainly the case here.

A simple yet effective little Metroidvania title that costs only a fiver, Sun Wukong VS Robot sends the monkey god down the well-trodden path of this genre, producing familiar yet satisfying results. An impressive animated cutscene establishes the game’s rather simple, Mega Man-esque premise: break the ‘mind locker’ put on your head by four evil robots, and escape from the centre of a mechanical labyrinth.

The game doesn’t do the best job of explaining to you what things do, but that’s ok – we largely know the drill by now. Action-platforming gameplay has you exploring and unlocking new skills and abilities as you progress, back-tracking to reach new areas and defeating bosses once levelled up sufficiently.

Wukong nails that satisfying feeling of gaining and accumulating powers, from double jumps and dashes to even a flame thrower-like attack controllable through the right stick, and it’s a blast making use of them in any way you see fit. Once you’ve defeated the first boss and accrued some upgrades, it does start to snowball and get easy in the later stages. It still manages to feel rewarding when you’re blasting through waves of enemies that you once would have had to carefully navigate to survive.

Visually, the game is lovely, with graphics reminiscent of the Konami titles of the NES era. That being said, the music leaves a bit to be desired. Rather than the typical heroic chiptune beat that you’d expect, Wukong initially opts for vague industrial sounds as you break out of your prison, or even a vapid lack of music altogether. It establishes a moody atmosphere to begin with, but after a while, you start to wish for something to underpin the silence.

The robot’s character designs are cool, but, unfortunately, the boss fights themselves are quite underwhelming. The first boss I faced: Shun – a lightsaber-wielding fellow with an attack dog and a sound effect that sounded almost too much like George Lucas intended – had some interesting patterns to avoid, but eventually just stood still in the final moments, as if accepting of his defeat.

Overall, while at first glance it might look to be just another generic action platformer on Switch from Ratalaika, Sun Wukong VS Robot is a short but enjoyable romp, and developer Bitca makes good use of the Monkey King’s various cool powers.

It might not hit the level of unique and creative highs that some of the other indie takes on the sub-genre have achieved over the past few years, but its affordable price point and fluid, satisfying gameplay make it certainly worth a spin if you’re looking for something to tide you over until Metroid Dread releases in October. It’s fair to say that Ratalaika Games don’t exactly hit the mark every time with their vast swathe of eShop releases, but this one hits the nail on the head in terms of what it sets out to achieve, save for some slight bugs and hiccups.

Sun Wukong VS Robot is a solid, enjoyable Metroidvania on Switch that uses the titular Chinese legend in an interesting way, utilising his many powers and abilities to modify gameplay. At an extremely affordable price point, it’s worth checking out.