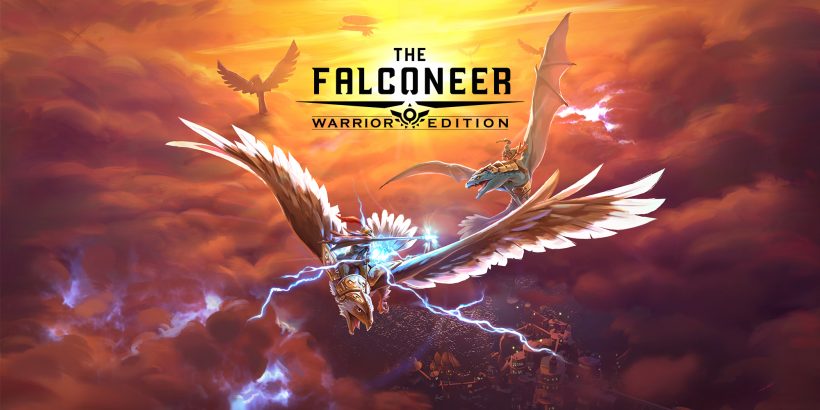 Oh, to soar on the wings of a bird.

That’s a quote (which to be honest, I may have just made up) which rings true in the premise of The Falconeer: Warrior Edition, a Switch arrival of a game which was a launch title for the Xbox Series X – that may well be a first-of-its-kind port.

This one has you playing as a Falconeer (naturally), a pilot-of-sorts whose mode of transport of choice is an enormous bird of prey which can for some reason fire projectiles as if it were a Tommy Gun. The game world is set across a vast open sea, much like in Zelda: The Wind Waker (or even the more recent Switch release Windbound, but that wasn’t nearly as memorable), dotted with islands giving home to friendly tribes, enemy forces and other secrets which can be uncovered through simple exploration.

While for the uninitiated, The Falconeer can initially be seen to be promising a combination of airborne action and free-roaming land-based movement, don’t go in expecting that. This is all based in the air, and the perches you pass on friendly islands which provide the on-screen prompt to land serve for little else than to give you access to a menu screen from where you can take in some story, advance to the next level, take on side-quests or purchase items and perks to improve your combat potency.

Things do look impressive and full of wonder, with islands and crags appearing from the sea as the clouds part while you draw near, but the lack of an ability to physically detach yourself from your mega-bird makes things somewhat more underwhelming than they ought to be. Much like Windbound was crying out for more life and personality to interact with on its islands, The Falconeer contains the sense of a living and breathing world to the cutscenes which occur between each level.

That comes despite friendly and enemy characters appearing in a pop-up window to the corner of the screen to call out to you or to scream out in anguish as you soar over the seas. It’s a storytelling mechanic that quite clearly nods to the Star Fox series, which Nintendo fans will only be pleased with, given that there is still no sign of another game in a series last seen in the love-it or hate-it Star Fox Zero. You can, however, play the game’s four chapters in any order, though don’t expect the story go on and on – each of the chapters covers the same events, but told from different perspectives.

The physics of the air-based gameplay mean that offence consists of a series of swooping flurries, interspersed by a near-constant u-turn as you attempt to get enemy forces in your sights. The controls certainly take some getting used to – you need to position your falcon so that enemies are placed within a highly unsteady crosshair that darts across the screen due to a not-too-reliable locking-on system. Switching targets also never seemed the easiest task in the world despite it coming in one of the earliest of the game’s combat tutorials. Barrel-rolling to avoid incoming fire only gets you so far: approaching enemies with stealth is often the safest way to go, while you can pick up mines from the sea and drop them on targets, with a precision of placement required.

One feeling which did keep returning time and time again during the playthrough was the simplicity, and therefore repetitiveness, of the missions. There’s a lot of the dreaded escort-type missions, where you have to arduously slow down to keep pace with a seaborne vessel while you are clearly capable of going much faster from above. Others have you clearing a path for your allies to make a smooth and safe arrival on an island, while there are some which involve heinously dive-bombing an island’s defences to allow another side to take it over out of petty revenge for a business deal gone wrong.

Things like engaging in friendly fire having story-based consequences, such as having you switch teams on account of your evil turncoat-ery, are clever little inclusions, though. It’s often worth playing around with finding out what happens if you become gaming’s worst traitor since GoldenEye’s 006, as it’s often far more fun than the segments which focus on keeping out of harm’s way while your teammates do all the damage.

One thing certainly worth noting is that The Falconeer is the product of sole developer Tomas Sala. I’ve reviewed numerous one-man team games before, but the visuals in this game are a cut above. Reviewing subjectively, I’d have liked to be able to get up close and personal with the game’s characters and locations by being able to walk around and explore on the islands, but to be objective, the fact that the game is as visually striking and plays as competently as this with such a tiny level of manpower is something to be marvelled at.

The Falconeer: Warrior Edition has come to Switch after initially releasing as an Xbox Series X launch title, and has done so in a complete form with all its content and DLC included. That’s a quick turnaround that Switch fans should definitely hope becomes a trend.

The Falconeer: Warrior Edition is an impressive technical achievement coming from the mind of just one individual in Tomas Sala. It looks great and feels fully-fledged. Take that out of the equation, though, and things are a bit too unvaried and repetitive for our liking.