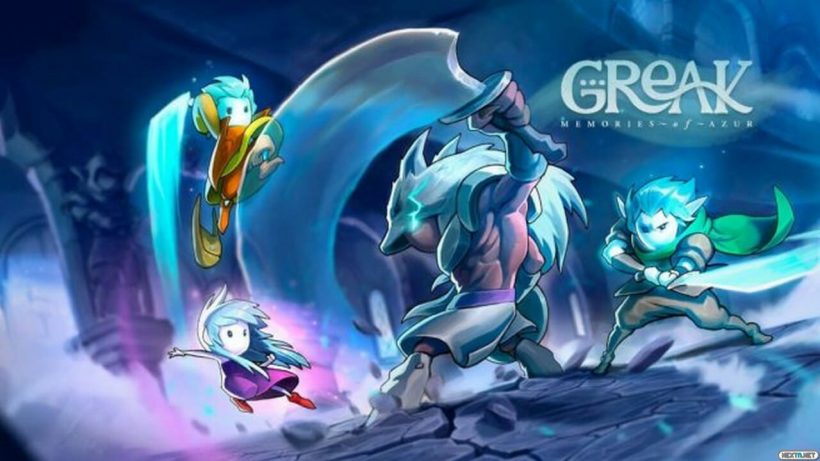 I really get drawn into games with hand-drawn animations. I’m not sure why, but I adore them. That’s what first enticed me into Greak: Memories of Azur – its striking art style. But there are so many more things about it that make it an interesting and enticing new title on the Nintendo eShop.

Greak: Memories of Azur is a 2D single-player side-scrolling game from developer Navegante Entertainment and publisher Team17. It follows the story of three siblings – Greak, Adara and Raydel – on their adventures throughout the land of Azur. Greak is the youngest of the siblings, and the character you will assume control of from the get-go. He’s also the cutest. I know what you’re thinking, I shouldn’t have favourites…

The race that Greak and his siblings belong to is called the Courines, and this particular race is under attack from a very nasty faction called the Urlags. Caught up in the ongoing battle, Greak has been separated from Adara and Raydel and so he is on a mission to reunite with them whilst also finding the components necessary to build an airship to escape Azur and reach safety, once and for all.

The story in Greak: Memories of Azur was one I was invested in from the start, plainly because it presents itself so well. The way in which the characters interact with one another and how the story progresses is wonderful, and this made it a pleasure to play through; it never felt forced. I genuinely didn’t want to put it down, and that’s often how you know you are playing a special game.

Greak also has some wonderful gameplay features. My favourite one is the ability to alternate the character you control at any given time and then have each character be completely in sync with yours. You feel in total control of the characters you play as, and it works extremely well, whether that be when getting them to wait at a specific area while you figure out the next steps, or even having them help with attacking monsters.

Greak: Memories of Azur is made up of numerous interconnected areas, each with its own style, challenges and dangers. The path in which to travel throughout these areas is fairly linear though. You will rarely go back to the same area twice, which is good if you don’t like repetitive gameplay but can be also a negative as the game feels a little short-lived. The one place that you will travel back to frequently is the game’s main town area, where there is a number of characters to speak to and collect quests from.

There are also various consumable items you can collect throughout your travels, which can be combined at campfires to create meals with extra benefits, as well as general upgrade items that will provide various abilities such as fast travelling back to the main town whenever you choose. This, again, adds a little more depth to the gameplay.

The combat in Greak: Memories of Azur is fairly smooth and simple to master, as it’s mostly just a case of mashing the attack button and hoping for the best. There are many enemies that you can encounter along the way, but it becomes pretty easy to learn those enemies’ patterns, too, as they’re pretty simplistic.

Boss battles can be a little more challenging, simply because it’s hard to avoid getting hit when you’re controlling numerous characters and keeping track of all three health bars. That being said, it’s incredibly helpful that the characters you aren’t currently controlling attack when you do, meaning you can do a lot more damage at one time.

Each character has the ability to perform a double jump and a dodge roll, and they all have their own unique attack styles, which helps to mix the combat up and keep feeling fresh without it getting too boring or stale. It’s not too hard to adjust to each of them either. The game also features some very clever puzzling mechanics that don’t require much brainpower, but just enough so it doesn’t feel too easy. These usually consist of finding ways to open doors to continue, whether that be by getting your siblings to stand on switches, or by lining up beams of lights across mirrors.

One thing that I felt was really missing from Greak: Memories of Azur was the ability to play with a friend – either through local co-op or online play. This is especially true when considering that there are multiple characters that you can control on the fly –  it would have been perfect. Perhaps this is something that can be implemented in the future.

Finally, the hand-drawn animations in Greak: Memories of Azur are striking, to say the least. The game looks fantastic, and it’s hard to not just gaze in awe every time you load it up. The detail packed into each and every area is wonderful; everything is bursting with colour and the characters and enemies each have their own personalities and style. Blood, sweat and tears have gone into creating this game’s visual style and it shows.

Not only this, but the game is also complemented with a beautiful live orchestra soundtrack, which quite literally takes your breath away at moments.

Greak: Memories of Azur is a fine example of a 2D platformer on Nintendo Switch, with beautiful aesthetics and some interesting takes on gameplay. It’s let down by its lack of cooperative play and simplistic combat.