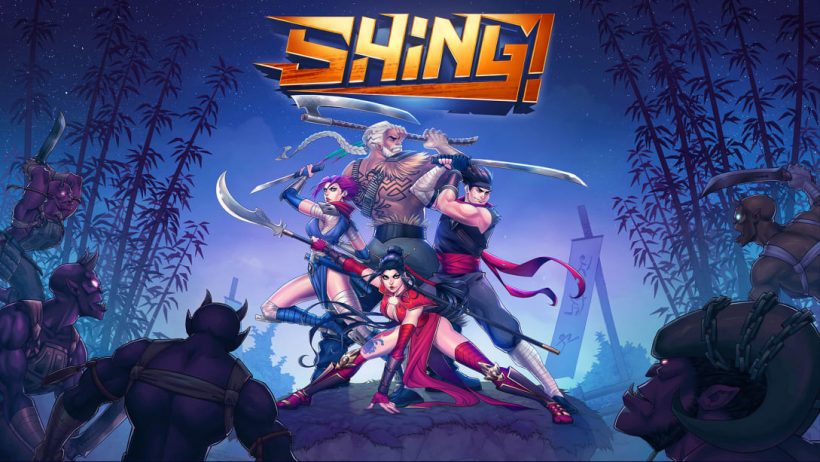 Shing!’s quirky, onomatopeic name is what first intrigued me about this indie title from developer Mass Creation, standing out in the eShop listings while also giving an instant glimpse into what the gameplay entails. If you guessed swords, ninjas, and fighting then, well, you’d be right.

An extremely cool opening anime cinematic introduces you to the four playable characters, one of which is rather overtly sexualised, while another stops an oncoming blade strike between his teeth. Between that and hearing the ‘shing’ sound effect numerous times within the first five minutes, the game certainly makes an impression.

Shing! is best described as a classic-feeling beat ’em up on the surface, with a more original approach to visuals and gameplay. Playing as an eccentric cast of warriors, you’ll fight in search of the ‘Starseed’, a source of power stolen by the evil demon Yokai. What sets this game apart from the average arcade beat ’em up is the fluent control scheme that allows you to pull off combos and attacks by flicking and swirling the right stick in different directions. Despite this simplicity, Shing! can get trickier on the higher difficulty levels, and varying enemy types force you to strategise.

Enemies will telegraph a split-second before they’re about to attack, giving you a window to deflect and counter with a powerful move of your own. It’s incredibly satisfying when you get used to perfecting the parry technique, although some enemies can feel cheap and frustrating to counter. Bomb-throwing foes, for instance, are extremely difficult to avoid, particularly if you’ve just committed to an attack, and so this makes them a priority target when picking and choosing who to take out next. You’ll also want to pay attention to the bonus and power-ups you can accrue, such as bombs of your own to stifle waves of enemies, or electricity buffs that give range to your swings.

One element of Shing! that doesn’t match its attempts at modernising the genre is the dialogue. Jokes are crass and seem to be purposefully on the nose, with the two male characters often making comments about the sexualised female characters. To give it some credit, however, the way the dialogue is interspersed with the combat does help to break up the gameplay, and it can be entertaining to hear the characters comment on what’s happening during the action. Optional lore sections during levels are a clever inclusion on the part of the devs too, delivering exposition and context to those that want it in a semi-cutscene fashion that also offers some respite before putting your poor thumbs back into the danger zone.

Shing!’s 2.5D visual style looks bright and vibrant on Switch, and I didn’t suffer too many performance issues during my time with the game either. Load times were a pain though, and they become a nuisance when you’re moving from screen to screen, only to get hit with one every few minutes.

Overall, Shing!’s novel take on the genre doesn’t quite make it a must-play for any Switch owners; the cringe-inducing dialogue doesn’t help either. However, some fluent gameplay with varying level premises and boss fights, online leaderboards, and challenge stages make it a noteworthy beat ’em up in the eShop, for those in need of a fresh take on arcade action. The accessible stick-based control scheme also suits the drop-in co-op feature well, and so it could be a good one to play through with a couple of mates even with varying skill levels. Perhaps just knock that difficulty down in the later stages for your own sanity.

Shing! is a unique beat ’em up experience on Switch, with a good presentation and fresh gameplay ideas that are mostly satisfying. Local co-op, unlockable costumes, and online high score lists give it additional replay value for fans of the genre.