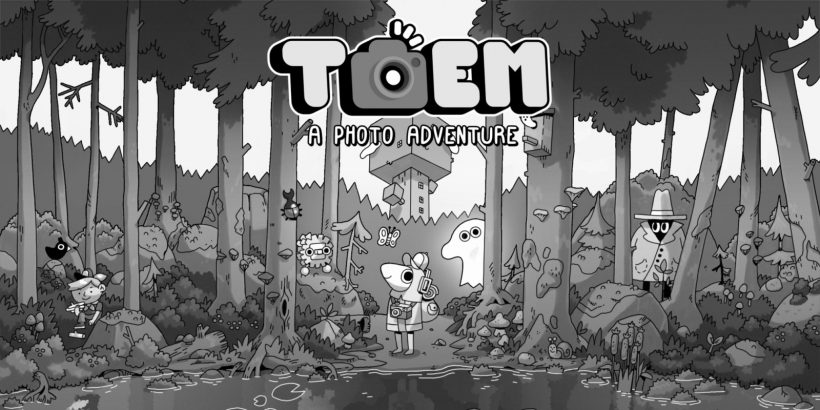 Amongst the most frequent trends in indie games, there is one that has risen in popularity in recent times thanks to its cosy aesthetics and laid-back approach: the so-called wholesome games.

Coming in many different formats and styles, wholesome games choose to build relaxing experiences on top of a multitude of unique mechanics. They can be simulators of different kinds (walking, farming, and dating – to mention a few), narrative-focused experiences, puzzlers, visual novels, and even photography-based games, as is the case in TOEM. While these games are getting their own spotlight with events like the Wholesome Direct, TOEM actually caught everybody’s attention during the Indie World showcase of August 2021.

One of the many reasons why TOEM managed to stand out – even when appearing in an Indie World with lots of other great games – is probably related to its unique art style, which, without a shadow of doubt, is one of its strongest features. Basically, the entire world of TOEM is constructed of different diorama-sized small places, which are entirely portrayed with a grayscale hand drawn art style. Thanks to that, every area feels like a miniature that you could hold in your hand (a similar effect of what you could find in Captain Toad: Treasure Tracker). Brilliantly mixing 2D sprites on 3D environments, TOEM presents a cozy small world that is worth exploring.

This sense of exploration and discovery is also encouraged by TOEM’s simple but effective narrative. Akin to the premise in Pokémon, you start the game by waking up and learning from your mom that you are old enough to start your own adventure. Instead of going out to catch monsters though, your objective is to experience and take a picture of TOEM. What TOEM really is will remain a mystery until the very end of the game. All you know is that you can find TOEM at the very top of the Kiiruberg mountain. In order to get there, you first need to travel through four different regions, all while helping people along the way.

It’s on top of that basic plot that TOEM creates a kind of quest system that you have to engage with in order to progress. You go by bus from region to region, but once you arrive at a new place, you can only get a new ticket after collecting a certain number of stamps. Each stamp will be given by a person after you help them in some way. By making you explore each area, talk to every NPC, and try to solve their problems, TOEM creates multiple puzzle-like photography challenges.

One of the most interesting ways TOEM plays with these photo mechanics is related to the diorama style ‘limitations’. While walking through each map, the game is locked to an isometric point-of-view. On most maps, you can rotate the camera freely, as well as change the zoom to see things better, if needed. However, due to the way that the isometric angle restricts your view, the game will often have certain details hidden from your standard point-of-view.

That changes entirely, though, when you are taking a picture. Every time you select the camera, the game presents you with a first-person perspective. As a result, it creates moments where you can move the camera freely in every direction, thus allowing you to change your perspective in ways that will provide opportunities to take pictures of things that were hidden before. If there is a big building blocking the way, or a wall obscuring your view, or maybe you are walking through a narrow passageway, these moments become a kind of hint for secrets and other surprises.

While the multiple NPCs and quest situations present in TOEM are often funny and interesting in their own way, it is important to note that this is a very simple game, which can be enjoyed by younger audiences too. Most quests are short and self-contained, not offering much of a challenge. There are a few more elaborated quests here and there, some of which will need you to find things in different regions, but these are the exception to the rule. If you are up for a breezy adventure that you can finish in about three hours, then TOEM is exactly the kind of game that you want.

In order to add a different layer on top of the quest-based progression, TOEM has its own kind of ‘photodex’. In addition to the main album where you can store the pictures you need for the stamps, TOEM also comes with a bestiary, which you can fill with photos from the different fauna you can encounter in each area. This adds to the longevity of TOEM in an interesting and welcoming way.

As much as TOEM keeps up the surprises for the duration of your time spent exploring the vibrant, beautiful environments,  the game has a few punctual performance issues in certain late-game areas. One area in particular suffers from constant frame-rate drops which can mar the experience somewhat. Nevertheless, this is a very specific problem that doesn’t hurt the overall experience. After all, this is still a short-but-sweet laidback experience that is totally worth experiencing.

TOEM is one of the many wholesome games available on Switch, but it is one that stands out thanks to its unique hand-drawn art style and enjoyable perspective mechanics. A short but sweet, frame-by-frame adventure.