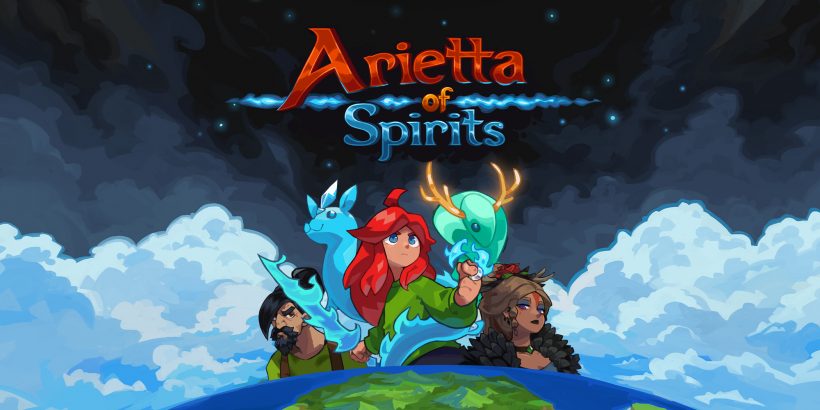 A spooky island with a dark history. Restless spirits with unfinished business. An intriguing tale of loss and acceptance. Arietta of Spirits wraps these ideas in a charming pixelated art style and weaves together an effective, emotional story. Following 13-year-old Arietta, as her family visits their grandmother’s cabin a year after her passing, Arietta of Spirits swiftly kicks into action with a quest that starts off simple, soon evolving into a grand adventure as you help various spirits find closure.

The story of Arietta of Spirits is easily the greatest thing about the game. It somehow manages to feel both grand and intimate in scale at the same time. The familial connections with Arietta’s grandmother help kick the game off to an emotional start that grounds the more fantastical elements of the narrative. The evolving tale of spirits and monsters, meanwhile, gives the game a sense of scale that expands the otherwise minute portion of the world Arietta inhabits. It’s an approach that isn’t without its flaws, however. The interactions between Arietta and her grandmother contain the game’s most emotive storytelling and is something I’m sure many players can relate to, but it’s unfortunately brushed aside fairly quickly in pursuit of that grander story.

Really, it’s a by-product of the extremely short nature of the game. I completed everything the game had to offer in just over three hours and was left yearning for more. Unfortunately, that feeling was brought on less because I wanted to experience more of the world that had been crafted, but more so because what I had experienced felt somewhat rushed. I’m all for games with shorter runtimes – certainly, not everything needs to be a 100-hour experience –  however, a balance still needs to be struck so that players don’t feel they’ve played an incomplete game. For all that I loved about Arietta of Spirits, that feeling did deflate my time with it. The game is touted as having an emotion-filled narrative with no filler gameplay, and whilst that is certainly true, I do wish more time had been spent expanding on the connections Arietta makes not only with her grandmother, but the other spirits she encounters too.

The game may be a fleeting experience, but the fluid, fast-paced nature of the gameplay does help to alleviate some of its issues. Combat is as simple as it gets, but this lends itself to the game’s short length. A sword acts as your only attack option, whilst an unlockable shield mechanic later on in the game gives you some options for those trickier fights. It’s simple but effective, cutting out any needless fluff and allowing for a greater focus on progressing through the story without having to master tricky mechanics that will be of no further use just a few hours later. A rolling mechanic adds some much-needed speed to traversal, and its dodging implications give fights a bit more depth. The way these abilities are doled out through the game and come together in the final act even goes some way to counteract that rushed feeling I mentioned before. It shows Arietta learning and growing, granting an illusion that more time is passing than really has. It’s well-paced in a game that otherwise has some significant pacing issues.

The island setting for the game may harbour some dark secrets, but it’s certainly a charming place. The pixel-art shines in the environments, it’s just a shame said environments lose their effectiveness fairly quickly. There are certain spots in the world that really stand out, with a witch’s cabin and an other-worldly realm among such areas that really take advantage of the art style and pop off the screen. Unfortunately, much of the island consists of forests and caves that aren’t distinct enough from one another to make any lasting impact and, given the winding nature of the map, can easily cause some confusion.

It’s unfortunate that the game presents so many interesting ideas and crafts a world that’s begging to be expanded upon, but instead insists on speeding through it all. Exploring the map, you see flashes of greatness that have such potential. The enemy designs are brilliant, becoming increasingly varied and interesting as you progress through the game. However, they experience the same give and take as the rest of the game. Generic enemies such as wasps, bats, and a blob-like creature are all you’ll encounter for a large portion of the game, with the most interesting designs arriving too late to be fully appreciated.

Arietta of Spirits is a game that ends right as you’re getting into it. Ideas and themes whizz by too quickly to make any lasting impact, which is a shame as there are some really great elements to the game. With a story that goes to some dark and emotional places and gameplay that’s satisfying and simple to learn, Arietta has all the makings of a great game. Sadly, whilst the flashes of brilliance are just enough to make the time you have with the game enjoyable, that enjoyment is just as brief as the game itself.

Arietta of Spirits buckles under the weight of its own premise. Telling such a detailed story in such a small game means no idea quite gets its due, and the moments of greatness are too fleeting to make a real impact.