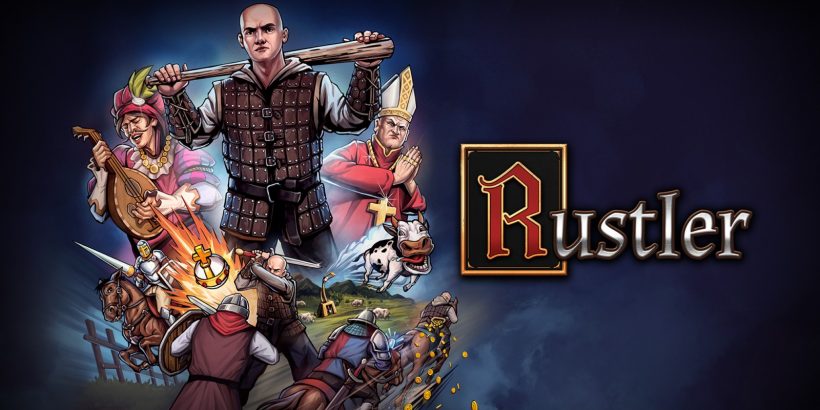 It’s hard to talk about Rustler without mentioning exactly what it is: a top-down GTA set in the medieval period. It isn’t ashamed of owning up to this claim, actively referencing these similarities in-game and never doing much to bat away such comparisons. It works, for the most part, letting you tear it up through a ye olde sandbox in a way that’s reminiscent of the DMA Design originals. Horsing around can be fun in the moment, even if Rustler ultimately doesn’t fully live up to the reputation of its Rockstar inspirations.

You roam these lands as Guy, a humble farm boy-turned-criminal delinquent who just so happens to be a dead ringer for Canis Canem Edit’s Jimmy Hopkins. I’m sure that’s not an accident.  The story is largely superficial in this way, but such seedy beginnings do well to thrust you into this relatively sizeable world of chaos and carriages. Speaking of which, just like the real GTA, you quickly have several excuses to venture off the beaten path. Ranging from local martial arts tournaments to competitive horse races, Guy’s goal to become the ultimate criminal doesn’t have to play out linearly if you don’t want it to.

In many ways, riffing off the GTA blueprint so much works as a shorthand to get you into Rustler and its rhythms quickly, but there are a few ways it differs. Combat, for instance, has been rethought due to the absence of firearms in the Middle Ages. Sure, Guy can always whip out a crossbow to take on the King’s guards, but it takes an age to reload so you’re much better off mastering the sword, spear, or axe. You’d think that such a large focus on melee would encourage the Rustler devs to make it feel satisfying. Sadly, though, too often does it descent into just button-mashing the ZR button in the hopes your blade touches skin first. ZL functions as a block, yet its effectiveness is questionable.

Much of the fun in Rustler comes from discovering how the game aims to work around these open-world hallmarks. No cars means using horses to get around, no radio means hiring bards to accompany you on long rides, and having to view the action from above means implementing a transparent filter whenever you venture under trees. That element was very much appreciated. Some of these solutions are rather creative and work better than others, providing you go in expecting a certain level of jank. Rustler is a rather ambitious project for such a small team, after all.

It’s easy to forgive Rustler for its slight lack of technical polish – the frame rate frequently dips and crashing into trees is a common occurrence – because it’s willing to poke fun of itself. Just like GTA, there’s an inventiveness to its tone and missions, to the extent that certain quest titles are puns named after popular film and TV. Whether it’s dressing up as the grim reaper to scare the local citizens (as you can do early on) or engaging in a drug-infused prison escape as a lute version of Queen’s ‘I Want to Break Free’ plays in the background, Rustler has a lot of fun fusing certain aspects of the 21st century and Middle Ages together. A beatboxing bard? Oh, go on then.

Combat mechanics might be a tad unpredictable and technical performance imperfect, yet overall Rustler still manages to mostly succeed in being the medieval GTA most of us players had always been curious about. Providing you don’t mind just how closely it adheres to Rockstar and DMA Design’s original template, you can have a wild time torturing townsfolk from a top-down perspective.

Rustler won’t win any prizes for originality, but it largely succeeds in aping the GTA format and infusing it with all things medieval. Could the technical performance be better? Yes, but where else can you ride horseback with a beatboxing bard?