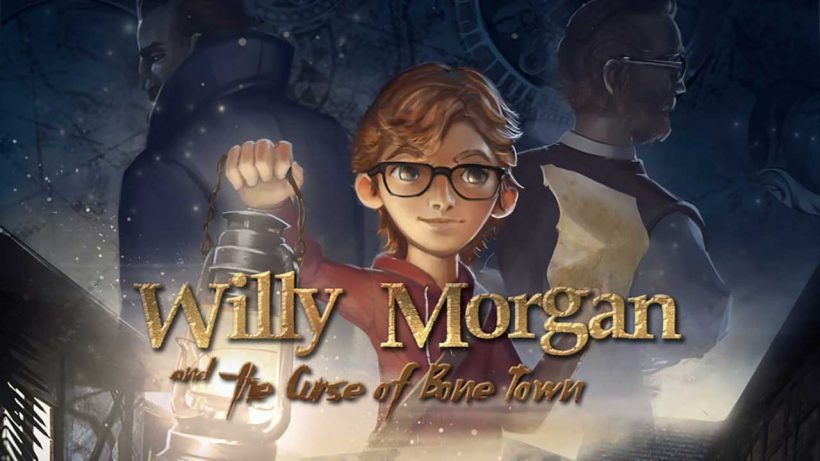 Point-and-click adventure games have come a long way since the Tales of Monkey Island series popularised the genre. While many developers have sought to push the boundaries with new perspectives and even larger mind-bending puzzles, there are still titles, like Thimbleweed Park, that stick pretty close to this iconic franchise. Willy Morgan and the Curse of Bone Town definitely fits into this category, and although it has a unique feel, it pulls back from becoming something bigger and better.

The prologue is fairly simple, but that’s perfect for a point-and-click game. Willy Morgan receives a mysterious letter in the post, prompting him to head off to a place called Bone Town, where his father disappeared years ago. From this point forwards, nothing is as simple as it should be. The first puzzle, finding Willy’s bike, is a lesson in how obtuse the game will be for the next three to four hours. Parts of the bike are scattered around the house, and you need to collect them and put it together before you can leave. Some puzzles are straightforward, such as finding a screwdriver to use on a clock, while others need you to think outside of the box.

Puzzles in the game tend to each belong to a larger challenge. For example, the overall goal of fixing Willy’s bike is spread around his house. In addition, however, you’ll have smaller puzzles to tackle within each area that altogether segment the game into full chapters. It’s the smaller puzzles that will have you pulling your hair out, though. While playing the game, we felt that some puzzles had been made deliberately simple to give the player an easy win here and there, while others had solutions that you’d never figure out organically. A great example of this is needing to use dried suntan lotion on a lamp to melt it so that you can lubricate some bolts and remove a wheel from the wall.

It’s these smaller puzzles that drove us around the bend. There’s a fine line between a puzzle making you feel clever and it forcing you to use every item you collect with every interactable object until you find the solution. The game contains more of these annoying puzzles than it should, but it fits with the quirky nature of the visuals, music, and the setting in general. The world feels grounded in reality and the few twists that are present don’t require huge leaps of faith from the player.

The game is made more manageable by a dedicated button for revealing objects you can interact with. Without this, you’d be moving the cursor around the screen, waiting for something to click on, and probably missing the solutions to most puzzles. It’s a fantastic feature that vastly improves the game.

Trial and error is pretty much inherent in point-and-click adventures, so you’ll probably already have an opinion on Willy Morgan and the Curse of Bone Town if you’re familiar with the genre. However, the visual art style and humour laced throughout the title are brilliant. While you may not find yourself laughing until you can no longer see, you’ll chuckle to yourself every now and then about a joke or a reference that’s been inserted in dialogue, or the description of a product or item. In addition, the art in the game looks excellent, with the environments popping out to become the real highlight, exactly as they should in any point-and-click game.

While it’s far from relaxing, Willy Morgan and the Curse of Bone Town is a challenging and enjoyable game, filled with puzzles that will draw you back in even when you’ve spent hours more than you should on them. Frustrating but incredibly easy to enjoy.

Willy Morgan and the Curse of Bone Town is a great callback to classic point-and-click adventure games but is let down by the frustration its puzzles can cause. However, a unique visual style and story are still worth discovering underneath.