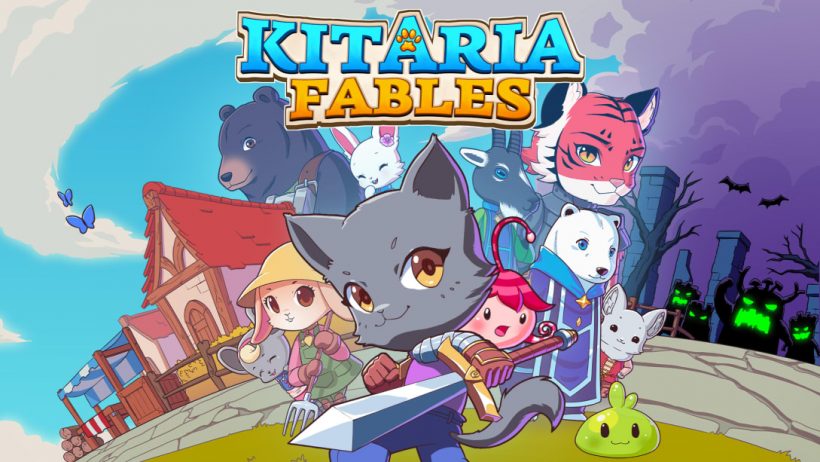 Lions (cats are tiny lions), and Tiger-Guards, and Bear-Blacksmiths, OH MY! These furry friends, and a whole lot more, are what you can expect if you put Kitaria Fables onto your Nintendo Switch.

Thanks to games like Rune Factory, we know that when a farming-sim and an adventure game meet it can produce one tasty gaming-pie, and Kitaria Fables is now attempting to add its own flavour to that dessert menu.

As soldiers, you, Nyanza von Whiskers, and your buddy, Macaron (an adorable pink squishy slime looking creature that is just begging for merchandise), make your way to a remote rural spot called Paw Village. After a chat with the village chief, you decide to settle into your family’s old farm in town. Using this as your base of operations, you promise to protect the village from the normally docile creatures who have turned aggressive.

Whispers of an approaching calamity won’t keep Nyanza down! There’s plenty to occupy your time: from harvesting crops to venturing forth, defeating enemies, to that oh-so well-known grind for loot. Before you know it several hours will have gone by. Of course, there is an overarching story that will require your feline expertise (AKA completing various quests), but that can be done at your own pace.

Kitaria Fables tries to keep game mechanics simple: press Y to use whatever item or tool you have equipped. However, there are some irritating aspects to this simplicity as well. When you’re out in the field fighting various creatures you can hit X to place a target on a nearby enemy. While this does make it easier to hit your enemy, should you dodge just a little bit too far your target will be removed. This gets frustrating when multiple enemies are targeting you at once. When you get back into the fray, pressing X to re-target seems to lock on to a random enemy (not even the closest one, or the one you were previously targeting).

When farming, pressing Y to till your fields and water your crops is more work than it reasonably needs to be. In order to switch tools, you must go into your menu. Sure, you can map items to the D-pad directions, but there are only four of those.

The movement in this game is not as precise as one needs when managing a grid system. Trying to water your crops can be a task in and of itself when even a feather-light twitch of the Joy-Con will have Nyanza blow past the spot you wanted to interact with.

Farming feels more like a menu management simulator, and I found myself only doing the farming if it was required for a quest. Kudos for trying to keep it simple, but having to constantly go in and out of the menu makes it more work than fun.

Like any farming simulator, there is an in-game clock that is constantly ticking its way through the day. It does not pause when you’re fiddling around in the menu.

There is no penalty for staying up past bedtime. Nyanza can run around as long as he wants without worrying about fainting. There’s also no stamina meter, so chopping down a tree doesn’t pose a personal health risk either.

This begs the question: is the in-game clock even necessary? It feels arbitrary, and only causes mild annoyance when shops are closed in the evening. Time of day doesn’t seem to have any effect on monster spawns either. The same group of orcs are always running around their camp, no matter the time of day. But it isn’t all bad, going from day into night does make the world feel more dynamic and alive.

Adventuring is much more enjoyable. Nyanza begins our story wielding a basic sword, but once you meet the adorable bear-blacksmith — and procure the correct materials — you can craft yourself a bow if you prefer ranged to melee. As you progress through the story, you can also learn various magic spells and attacks. Higher-level spells require more materials to create, and you can only have four spells/skills equipped at a time.

If you enjoy cute things, then the art and design of Kitaria Fables is definitely for you. All the NPCs are adorable animals that could easily become beloved plushies. And it’s downright difficult to say no to a cute baby bunny asking for blueberries!

There are a few strange graphical choices: tall objects in the foreground prevent you from seeing what’s behind them. If you walk behind the object it will become slightly transparent. This can make it difficult to see the action. Also, some equipment doesn’t appear to fit Nyanza all that well; a helmet found in a chest has Nyanza’s ears clipping through it. They’re small complaints, but annoyingly noticeable.

The music is enchanting! One of the themes even features a pan flute! The sound effects are quite good as well, and it is satisfying to hear a large TWHACK sound when landing a critical hit.

All in all, Kitaria Fables is an adventure game with modest farming simulation aspects. If you were hoping for the next Stardew Valley, you may need to look elsewhere. If you prefer bows to hoes, then consider this for your Switch library.

Kitaria Fables does a lot of things well, and a few things a little less well. It’s cute and colourful, and the adventuring is absorbing, but the farming falls a little flat.