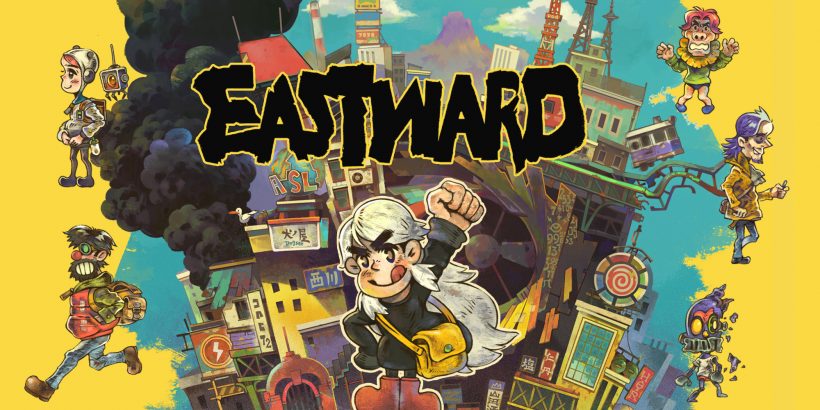 In the apocalyptic world of Eastward, few dare to dream of a life above the surface. Few but the unlikely duo of John and Sam – a hard-working miner and man of few words, and a sprightly young girl full of energy. Together, they embark on a journey east, and a sprawling quest unravels across a weird and wonderful land.

Eastward is an adventure full of action, puzzles, and intrigue. However, the first thing most will notice about the game isn’t its gameplay, but rather its stunning art style and retro aesthetic. The game uses gorgeous pixel art with a top-down 2D view, and the attention to detail is superb.

Every environment is bursting with creativity, often overwhelmingly so when you first set foot in a new town. Sometimes you just have to sit back and take it all in. And despite the derelict nature of many of the game’s areas, Eastward feels full of life.

This is a game that knows how to set a tone, and after the first couple of chapters you’ll know this isn’t your typical light-hearted romp. Eastward nails its lighter moments, but it goes to some darker places too. That said, much of the game is dotted with humour and quirky charm. The characters are lovable and eccentric in equal measure, and in-between fighting creatures you’ll be tasked with collecting crabs to cook, herding flying pigs, or acting on a film set.

But this is also a game that clearly wears its influences on its sleeve. Comparisons have been made to Earthbound or The Legend of Zelda, and there’s even a dash of the Mario & Luigi games too. The gameplay takes a lot from older Zelda titles, with hidden heart containers and bombs playing a role in the game’s dungeons. Eastward manages to stand on its own though, and never feels like it’s simply following in the footsteps of other games.

The aforementioned dungeons are stacked full of puzzles and enemies to defeat — and usually some kind of boss fight to conquer at the end. They’re fun to explore and the mechanics within them never overstay their welcome. Eastward is a pretty lengthy game, but you probably won’t be stumped on any individual puzzle for too long. Some of the bosses require some trial and error before their weakness becomes clear, but that’s usually the biggest hurdle you’ll have to overcome.

Using John and Sam’s abilities in tandem adds a lot of depth to the gameplay, allowing for more complex challenges. John is the main fighter of the duo, smacking enemies with his frying pan or blasting them with projectiles. Sam uses her powers to stun enemies, allowing John to go to town on them. These abilities are useful both in combat and outside of it, and the game makes the most out of them.

As mentioned before, Eastward is a long game, clocking in at around 25-30 hours depending on how quickly you follow the main storyline. Longer titles tend to run the risk of dragging on, but Eastward keeps its slower sections to a minimum. A couple of chapters needed better pacing but the story as a whole is enjoyable and compelling. Unfortunately, there’s quite a lot of backtracking in certain parts, and with no way to fast travel between areas you’ll often have to re-tread the same path multiple times.

Aside from the backtracking, Eastward’s biggest pitfall is on the technical side. I experienced a few crashes, one of which happened right at the end of an unskippable cutscene, forcing me to watch the whole thing again. This isn’t as bad as it sounds since the game auto-saves often, but it’s still a bit annoying. Far more annoying were the frame drops during chapter three’s boss fight. This particular section felt incredibly sluggish, and along with the crashes it became an unfortunate blemish on an otherwise smooth title.

Don’t let these issues turn you off the game entirely though. Eastward is mostly excellent, and it’s worth sticking through some of the slower moments to get to the real meat of the game. The dungeons are great, the combat is snappy, and the world is a joy to explore. There are lots of things to see and do, including hidden power-ups, cooking, and collecting gacha figures. The cooking minigame is particularly fun, with lots of recipes to discover. There’s even an entirely separate game based on old-school turn-based RPGs.

This bonus RPG, entitled Earth Born, is a fully playable game within the world of Eastward, and if you like turn-based gameplay you might actually end up neglecting the main story. It even has a New Game + mode, which Eastward itself sadly lacks (in fact, you can’t return to areas you’ve previously visited, which makes completing all the content on your first run almost impossible, unless you follow a guide).

Despite a few minor issues, Eastward is a brilliant adventure, well worth a playthrough. If you can overlook some occasional backtracking, or the odd glitch, you’ll find lots to like in this title. It’s easy to see the love that went into this game from the developers, and it stands out among the genre as a truly memorable experience. Anyone looking to get stuck into a new adventure should seriously consider heading east.

Eastward may not be perfect, but it doesn’t need to be. The creativity on display is fantastic, and the gameplay is fun and varied. It’s an adventure you won’t be quick to forget.