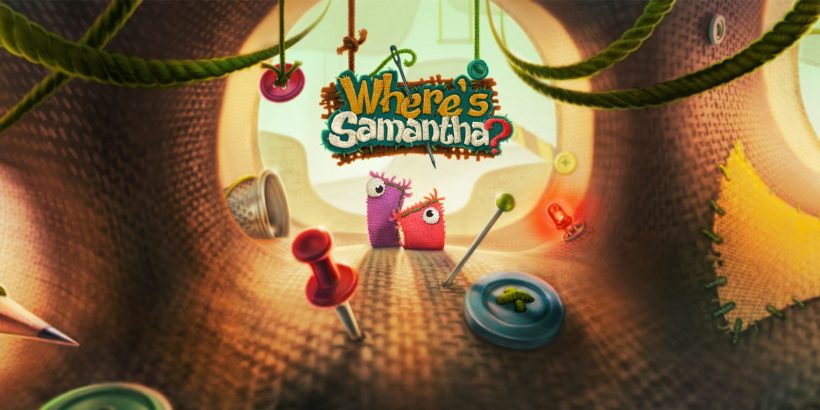 Don’t you just hate it when a wind comes from nowhere and blows your love interest away? This is the predicament for poor George, a stitched red fabric cube, whose partner Samantha has been whisked away from him unexpectedly. The stage is set for a puzzle platforming quest across multiple levels as George attempts to reunite with his lost love.

His texture-rich journey is represented as a less colourful version of Yoshi’s Woolly World, although there is still charm to be found in the buttons, stitching, and string that forms the environments in which George travels. He can move left, right, and jump, but finding a dangling ball of yarn a different colour gives a slight tweak to his abilities. Becoming blue allows George to become a little bigger and heavier, with a press of a button dividing him into two separate red cubes (each lighter and smaller). Various weight-based puzzles ensue, and there are more colours and ability variants to find which build the layers of complexity.

In fact, with each additional variant, it becomes more apparent which game Where’s Samantha? takes inspiration from. The 2D side-scrolling puzzle-based platforming, the range of differently coloured characters each with their own unique attributes… wait a minute, I’m getting Thomas Was Alone vibes here! The similarities are startling: there’s even an award-winning comedian on hand to voice the story via narrative moments between each level (in this case, Rufus Hound, who does an admirable job with a script that unfortunately lacks the punch of Mike Bithell’s indie release).

Like Thomas Was Alone, completing a level requires that you align your characters with exit points, although Where’s Samantha? adds collectable letters to each level as an additional incentive to explore. They don’t have to be collected, but doing so provides the on-screen text and audio narration that precedes the next chapter. Having these letters function as the means to gain the full picture of where the story is going is a rather odd design decision. Surely the narrative should be presented between levels regardless, to engage the audience in the tale? As an aside to this, there’s a certain mundanity in collecting letters of the alphabet which makes me realise why Nintendo opt for gold coins. Or gems! Or fruit! Trying to position your bounce on a trampoline to reach a beige-coloured letter R just doesn’t have the same thrill.

As the levels progress, new threats are introduced: spinning blades, combs, and lasers stand between your little fabric folks and the exit. Visually, the hand drawn artwork is lovingly crafted, albeit lacking in variety. Although this is no doubt intentional design, as the puzzles need clarity in their depiction. There is a gradual increase in difficulty that introduces new elements as you progress, and a committed player can expect to complete the game within a few hours.

Is the blatant similarity to Thomas Was Alone intentional? I’m not sure but, unfortunately, it’s hardly a flattering comparison. The presentation is solid, but Thomas Was Alone managed to distil the same puzzle style to such a fundamentally pure concept (coloured cubes on a black background, with a stronger story arc) that it would be hard for any game to replicate that vision. Where’s Samantha? serves up a competent puzzle platformer that exists in the shadow of another. It’s perfectly playable, although lacking in much incentive to push through to the finale. Hardly an epic yarn, then.

Where’s Samantha? Well, she’s only gone and gotten lost in a competent puzzle platformer that can’t hide its lack of thrills behind its charmingly woven art style! There’s some appeal for puzzle fans, however, over the course of the journey.