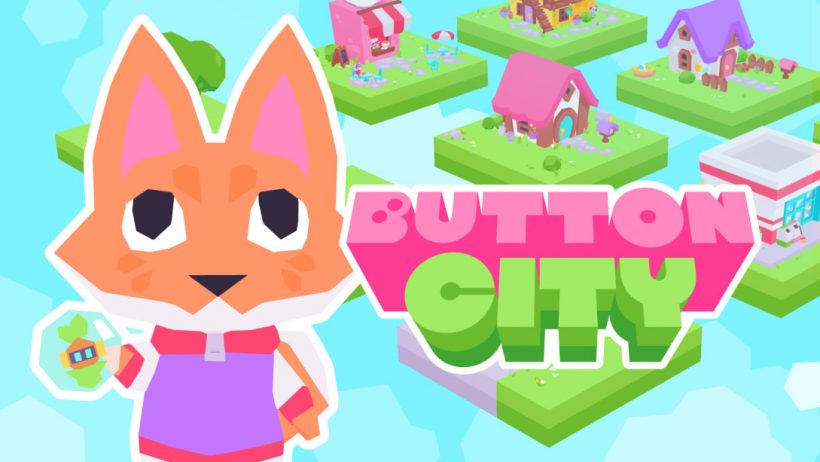 You know that feeling when you find a twenty in an old coat? That’s the feeling you get when playing Button City –like you’ve just found an amazing treasure!

Button City begins by introducing us to our protagonist: Fennel. Fennel is a shy little fox that’s just moved to town. After staying inside playing video games for a bit too long, his mother encourages him to go out and make some friends.

On the way home from buying mom a sandwich, Fennel bumps into some other kids talking about heading to the arcade. Taking mom’s advice (much to the chagrin of her stomach) Fennel detours and is caught up in a whirlwind adventure of friendship and gaming!

The story is immediately engrossing; expect to lose track of time while following Fennel and friends (the Fluff Squad) around. This game is full to the brim with heartfelt themes and touching moments, from helping a friend understand and express emotions in a sibling rivalry, to winning the best pie-and-flower-arrangement contest. This game will make you laugh and cry, and you’ll be cheering for Fennel and the Fluff Squad the whole time.

Representation is important, and it seems to be difficult for some games to do properly. Not in Button City. For example, one of the main characters, Chive, is a bunny in a wheelchair. On top of that, she’s wicked smart, engineers her own robots, mods the machines at the arcade, and holds most of the high scores on every game!

Chive is one amazing lady! No one ever says: “Wow, you do that and are in a wheelchair!?” or “I can’t believe a GIRL is the best at games!?”. THAT is how you do representation folks! It just is, and exists, and no one feels the need to draw attention to it.

Gameplay-wise, players will spend most of their time taking Fennel from place to place. Living in a low-poly art style world, the inhabitants have the nifty ability to teleport themselves around. Pressing B will bring up the world, allowing you to scroll through until you find the area you want to land on. Sometimes the controls feel a bit clunky. Pressing A to interact with an object, for instance, can have Fennel doing a dance around it until he gets into the precise required position for the interaction to take place.

Then, there’s the arcade: Button City (yes it’s the name of the game and the arcade in the game). In this gamer’s paradise, there is racing (rEVolution Racer), DDR style dancing (using A, B, X, Y buttons and the Dpad), and the almighty MOBA: Gobabots!

Gobabots is a game based on a popular cartoon (in the game) by the same name. Heroes that embody various fruits compete to collect the most berries for a big blender to make the best smoothie. While playing with the Fluff Squad, you use Pinerang (a boomerang throwing speedster), but you can purchase all of the different Gobabots and challenge various characters around town to Goba-battles too.

The music in this game is tremendous. It has that chiptune/bitpop feel akin to bands like Anamanaguchi. The soundtrack is worthy of your favourite Spotify playlist, and really brings the game to life. Artistically, the game is low-poly 3D, but this doesn’t take away from the game. It enhances the idea of stepping into the colourful world of a young child making new friends, discovering who they are, who they want to be, and what is important in life.

Wholesome, heartfelt, emotional, touching: all of these words evoke Button City. Don’t hesitate, pick this one up for yourself or your young ’uns; there are so many good themes and lessons for a young mind to absorb! Plus, Gobabots!

Button City is an adorable little adventure-arcade game that is both lighthearted and heartfelt, with an amazing soundtrack, a lovable cast of characters, and a story with all the feels. It’s a worthy addition to any Switch library.