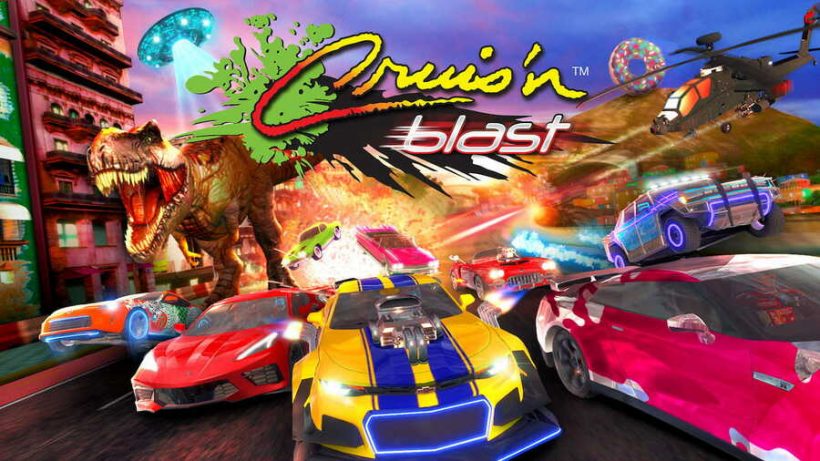 I’m sure we all remember a time when we would go to the arcade. Hours would be spent in there, along with all our parents’ money. There’d be so many cool games to play. Sticky floors, cheap prizes, and crying children would create that perfect arcade atmosphere. For those who have visited more recently, that may be where you may have first seen — or played — Cruis’n Blast, as it made its home in arcades back in 2017. Now, it’s raring to go on the Nintendo Switch. Is it racing into first place though?

Cruis’n Blast is an over-the-top arcade racer that offers players a light-hearted but fun experience. The gameplay is simple with players finding themselves racing around some pretty whacky tracks to take first place; smashing cars, jumping up ramps, and collecting goodies (money and keys) along the way. Keys are used to unlock new cars, and each race has three to find and collect. With 30 different courses to play on, there’s a lot to keep you occupied.

Speaking of the tracks, they’re both hectic and crazy with buildings falling down, planes flying past you, and even dinosaurs to avoid. They’re a ton of fun to look at and experience — when you aren’t rocketing through the air on some mad jumps that is. My main critique of the tracks, however, is that they can feel rather repetitive, often seeming like re-skinned versions of other tracks. This can lead to you getting bored quite quickly.

Another thing I noticed early on was that Cruis’n Blast is extremely easy to play. I found myself never needing to slow down for corners as the game would pretty much do this for me. Even in the event of me hitting a wall or object, the game would simply turn my car so that I’d continue in the direction I was moving. This took any kind of challenge out of it and serves to remind you that this is an arcade game.

While playing the game itself is easy, coming first in the races isn’t. This is due to the incredibly frustrating, heavily scripted AI. The game won’t allow you to pass specific cars until you get to a certain point in the race. If you do manage to catch up to the players in front of you, they will just speed up to get further away from you. The game also allows you to perform a ‘take down’ on cars near you (imagine Burnout) but even if you take down a car in front, it will simply respawn and then speed past you moments later. It makes the whole thing seem pretty pointless. You will often find yourself getting into the top three, seconds before a race ends, and it feels like the game has too much of a say in that happening.

There are a total of 23 different vehicles to unlock, ranging from cars like the Nissan-GTR and a HUMMER, to completely ludicrous rides like an actual Triceratops, which is both amazing and ridiculous. Of course, not all of these will be available from the get-go; most of them will be unlocked using either in-game currency or the keys I mentioned earlier. This does provide some incentive to keep playing which is very much needed.

Each car also has a small number of upgrades that can be unlocked simply by using the car in races. The more you use it, the more you level up, and therefore the more you will unlock. These upgrades come in the form of neon lights, body kits, and even slight tuning upgrades. They’re not much, but, again, it’s enough to keep you interested. It’s worth noting though, that it doesn’t really seem to matter what vehicle you use due to the scripted AI.

All cars feel the same to drive too — weightless. You almost feel like you’re floating, which is a little disappointing. You would expect a muscle car to feel a little heavier, but that’s not the case here.

As well as using your money to purchase upgrades for your car, you can also use your money to purchase boosts. Receiving a short speed boost enables you to get ahead a few places. I mean, that is until the scripted AI races straight past you again. It’s a nice addition, and it would be incredibly useful had it not been for the AI.

Cruis’n Blast does have a multiplayer mode but, unfortunately, it is only limited to local play or via play on the same console — there is no online multiplayer which is extremely disappointing. It would be nice to have an online aspect to keep you playing once all courses have been completed in single player. That being said, even the fun of local multiplayer fizzes out very quickly after a few races due to the repetitive nature of the game. It’s the same experience as the single-player and so that pesky scripted AI makes a return.

In terms of graphics, Cruis’n Blast is exactly how you would imagine an arcade racer to look: bright colours everywhere. It doesn’t look good; it doesn’t look bad. It’s just average. It won’t blow you away by any means, which feels indicative of its arcade origins. A fresh lick of paint wouldn’t be able to hide the cracks in Cruis’n Blast’s game mechanics. This will likely appeal to those who’ve played it before, but, outside of that, it feels as though it would most appeal to children due to its easy difficulty.

Overall, Cruis’n Blast is a simple and light-hearted arcade racer that, had it not been for the heavily scripted AI, would be a ton of fun to play. Unfortunately, this overrules all features in the game and leaves it feeling unfair and frustrating.