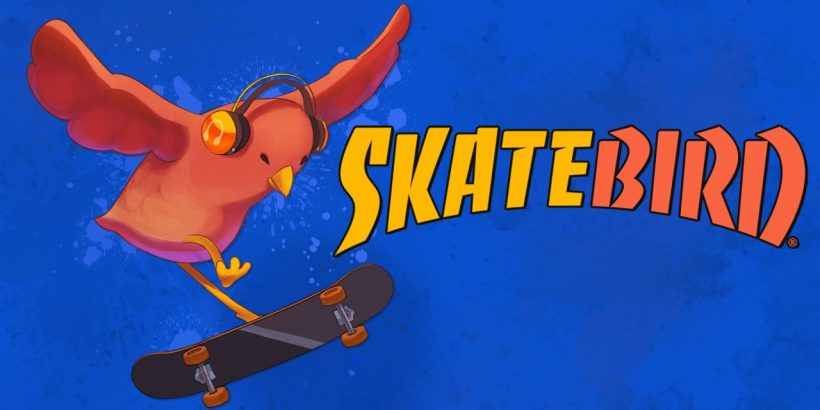 Announced in December 2019 and given quite a push by Nintendo, SkateBIRD turned a lot of heads with its wholesome, quirky premise, and has been hotly anticipated for a while. Having enjoyed Skate City earlier this year, I was looking forward to greasing the bearings and dropping in on this one, but with games like that and even Tony Hawk’s Pro Skater on the platform already, the early bird had certainly not caught the worm here, and had a lot to prove.

Further delay after originally being slated for release in 2020 means that SkateBIRD has flown the nest even later than expected and, unfortunately, with shoddy controls, repetitive music, and some uninspiring level design, the game ends up being more birdfan than birdman.

SkateBIRD’s gameplay setup follows a structure that anyone who has played a 3D skating game should be familiar with. You skate in open, free-play levels, with collectables to find and missions to complete in order to progress to the next part of the story. The premise is that you’re the lonely pet bird of a former skateboarding owner, who is no longer around as much to look after you, and isn’t having the best time of it with work — so you’re here to team up with your other bird friends and save the day.

With a stuttering, iffy camera and controls that just aren’t up to scratch with other games in the genre, SkateBIRD takes a while to get used to, and its jankiness means it’s never really satisfying to play. Pulling off a successful combo only to trip and fall over the slightest bump in the road is annoying, and trying to carefully line up jumps and grinds can be a chore even when you feel like you’re starting to get good at maintaining the board. Flipping the bird becomes a frequent occurrence, both on-screen and in hand gestures after trying to get any bird skater to follow simple instructions.

The game’s difficulty also comes from these frustrating challenges, with controls and weird, inexplicable shifts in momentum often making it hard to land in certain spots or reach areas to perform tricks. Combos and tricks on the surface are extremely easy to pull off, so you’ll find yourself repeating missions for reasons that feel unfair rather than skill-based, which of course shouldn’t be the case.

Levels in SkateBIRD are also rather bland, and offer more obstacles that you’ll spend the duration trying to avoid in order to stay afloat than ones to get excited to conquer. The concept of skating around a huge bedroom and office environment borrower-style is a neat and entertaining one, but it’s something that has been done before, and better. The first bedroom level feels extremely similar to the ‘Andy’s Bedroom’ stage from Disney’s Extreme Skate Adventure released back in 2003, with an almost derivative layout that doesn’t capture the magic that the Toy Story-inspired level did.

The levels that follow are even more monotonous, including a rooftop section that doesn’t really have notable obstacles aside from ramps to transfer and wires to grind across, and a corporate office that… Well, I suppose I can’t criticise it too much as its blandness is quite authentic, aside from the numerous skateboarding magazines lining the walls and desks to form perfect half pipes.

What prevents SkateBIRD from being completely flightless is its humour and bird-related shenanigans, which it delivers on effectively, and which earned the game so much attention to begin with. Bird customisation options are plentiful — including species from common Pigeon to imposing Hawk and hats ranging from caps and beanies to Bernie Sanders-inspired wigs — and the irreverent NPC characters enjoy flapping their gums when plotting their next plan of action or giving you snack-related mission objectives. My favourite unique feature is the ability to randomly ‘screm’ on command, an aggressive chirp that counts as a momentum builder, continuing combos in a pinch when needed.

The game’s soundtrack, while tedious and aggravating after a while, does aim for the skater-vibe we’ve come to know from Tony Hawk games but with a bird theme. You can collect mixtapes to unlock more tracks and even curate your custom playlist in the settings. Expect to hear the beginnings of songs over and over again, however, as whenever you start or restart a mission, the game will skip to another track rather than play uninterrupted.

Unless you’re a dedicated avian enthusiast that’s dead set on the premise of SkateBIRD, it’s extremely difficult to recommend — particularly when there’s a more-than-competent version of the Tony Hawk’s Pro Skater remakes available. The premise is a fun one, and some attention-to-detail with the bird variations shows that clear effort and love was put into this title from developer Glass Bottom Games. But the gameplay ultimately has its feathers truly ruffled by some of the other much better games in the skate or die landscape out there right now on the eShop.

Humorous dialogue and bird customisation don’t do enough to stop SkateBIRD from falling far down the pecking order of skateboarding games available on Switch, with boring levels and controls that are janky and frustrating at best.