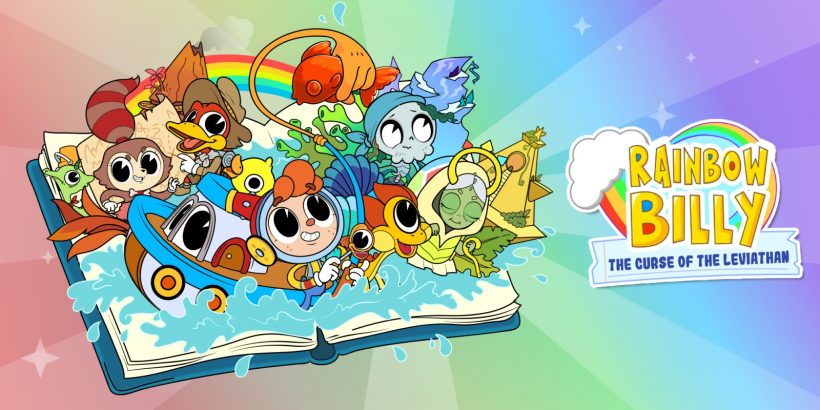 Picture a world where empathy, kindness, and acceptance are found in abundance. Sounds pretty perfect, no? Well, this is the world you’ll find yourself in as you adventure through Rainbow Billy: The Curse of the Leviathan, and it’s one of the most emotionally enriching, and positively refreshing gaming experiences I’ve had in a long time.

You play as Billy, a shy yet cheery kid who just wants everyone to be who they are. Alongside a snarky punching rod brilliantly named Rodrigo, you set out to save the World of Imagination after the aforementioned Leviathan’s curse saps all the colour from the world, transforming its once happy residents into insecure husks. Whilst this may seem like another run-of-the-mill, save the world adventure, it’s anything but. Every action you take is centred around the overall theme of acceptance and, in doing so, elevates the game beyond its basic premise.

The game’s most radical departure from tradition is through its confrontation system. As you journey through its world, you’ll encounter an (ironically) colourful cast of characters. The titular curse has brought forth their deepest fears and insecurities, and rather than throw you into battle with these creatures, confrontations instead see you listening and talking to them in an attempt to recolour their hearts through empathy. Listening to the creatures gives you an idea of their specific fears, which then allows you to choose the appropriate response to alleviate their concerns. It’s not a terribly complex system, and nor does it need to be, with many encounters feeling as if your word choice isn’t really important. However, it becomes an essential mechanic when you’re faced with some of the harder battles, where choosing the wrong response can drastically backfire in what’s otherwise a fairly easy game.

There’s a vast number of different creatures to meet and befriend within the game, many entirely optional, encouraging exploration of its world. However, some of the story-based encounters do reveal an unfortunate flaw in the confrontation system. Each creature you befriend has three different coloured moves they can use to recolour another’s heart, unlocked as you strengthen the bonds between characters. They also each have a separate minigame to complete when attacking, and these are extremely short, arcade-like affairs. There are only a handful of these games, and in longer battles they can become overly repetitive, something exacerbated by the sometimes-wonky pacing of confrontations in the overworld.

Where Rainbow Billy truly excels is in the way it crafts meaningful relationships between characters and, in turn, gets you emotionally invested in their journeys in a comparatively short amount of time. Each of the creatures you recruit to your team has their own insecurities and, unless you’re practicing Vulcan levels of emotional stoicism, you’d be hard-pressed to find a character that doesn’t resonate with you in some way. Challenging issues range from bullying to the loss of a loved one, and the game tackles each with the care it deserves. What’s most inspiring is that the game doesn’t just make the characters’ problems disappear once you’ve recoloured them. You’re able to form close bonds with each character, learning more about what troubles them, and offering help without pretending it’s all that’s needed. It puts a real focus on the importance of mental health and getting help, whilst also observing the importance a fresh perspective and a friendly ear can lend, and is a genuinely inspiring approach to game design. The game shows respect for the themes it aims to address, and the journey Billy takes throughout really drives this idea home.

One of the things that struck me most about Rainbow Billy was the music. The soundtrack bounces from energetic and fun, to hauntingly beautiful when you least expect it, sometimes even combining the two to staggering effect. The inclusion of some original songs, meanwhile, adds some brilliant texture to the narrative.

A handful of bugs did affect my experience of the game, but most of these were too brief to make any real impact. Load times as you first boot up are excruciatingly long, and frame rate drops occurred quite frequently but, again, not so much that it really soured my opinion. Unfortunately, one major bug did. Twice the game soft locked on me, causing a full restart, including at the very end of the final boss battle. It’s a shame that the experience was slightly marred right at the end, although I was playing a pre-release version of the game so a planned patch may address these concerns.

Rainbow Billy: The Curse of the Leviathan is unlike any game I’ve experienced before. Its basic mechanics may be rooted in other genres, but the way they’re utilised is perfectly unique. The focus on acceptance and empathy is so refreshing for a game, and it addresses its complex themes with grace. You’ll go into this game to experience a fun adventure, but may just come out having learned something about yourself.

Rainbow Billy: The Curse of the Leviathan £21.99

With a combination of classic adventure gameplay and a unique battle system, Rainbow Billy: The Curse of the Leviathan is a refreshing game with a deep message. Its thoughtfulness making for an incredibly wholesome and affecting experience.