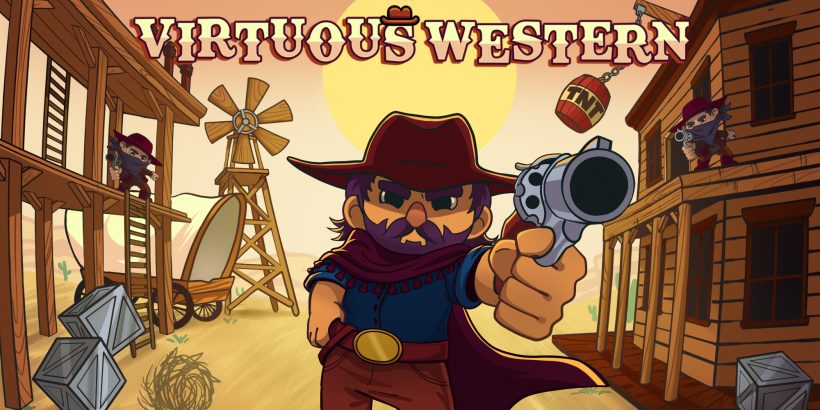 One of the perennial debates in gaming focuses on length. Behave, now; I’m talking about how much value we assign to hours played in the context of the quality of a game. It’s not as cut and dried as some would have you think but, still, there are limits. There have to be.

Let’s introduce Virtuous Western first, though; neither plot nor mechanics will take long to cover. So, it’s the Wild West, someone’s nicked your horse, and you need to kill all the bandits in an attempt to recover it. The first bit of action has you shooting an enemy in the back — I’m not sure what’s particularly virtuous about it, but it sets the scene for what follows. In each level, you’ll need to kill all enemies with limited ammo. Some might be on higher ground, which you can access via ladders. Others might be behind boxes that can be solid or destructible.

Various rules affect how you can go about doing things, hence the puzzling aspect of this basic platformer. Enemies facing you will shoot if you get close. Enemies take time to reload their weapon after every three shots. TNT explodes when shot or dropped. These rules are rarely used to create any great deal of a challenge, unfortunately.

Back to the issue of game length, then. On the objective, literal side, of course, quantity matters. The more you get of something, the better, right? Who wouldn’t want an even bigger Hyrule or a version of Hollow Knight with twice as many bosses to overcome? Realistically, though, most of us recognise that quantity is not the be-all and end-all. Just as in film or literature, too much of a good thing is exactly that: too much. In gaming, we’re often looking for that sweet spot, a challenge that we can just about overcome, having worked as hard as we can. But even then, there are exceptions: we don’t all have as much time to spend playing games as we’d like.

Although I’m a big fan of those aforementioned epics, I’m also a fan of shorter games. A Short Hike is not only wonderful but confidently, proudly petite. However, there is still a limit. Virtuous Western, I’m sad to say, falls well below this limit. Each of its 30 levels is a single-screen puzzle, many of which last a minute at most. It’s all over within an hour. Blink and you’ll miss it.

The first half of the game feels like a tutorial. Halfway through the levels, you’re introduced to a new mechanic: walking through a doorway and being transported to another. And that single action is essentially the entire level. Now, there’s nothing wrong with dialling back the difficulty, briefly, to introduce new elements. But when levels are at such a premium as they are here, doing it so far into the game just comes across as insulting.

When a game is incredibly short, it affects other aspects too. Virtuous Western doesn’t give itself enough time to vary its own style; every level looks just the same. To give it some credit, the game does introduce additional elements, such as dynamite which must be thrown in an arc. There’s also a final boss, which is actually quite tricky until you discover the knack. But this is all far too little, far too late.

After 30 levels, the game offers a speedrun. It’s the game’s greatest asset. Players are unlikely to relish the task of testing their memory with repeated runs of these levels. But for any beginners looking to get into speedrunning, a simple challenge such as this actually makes for good practice. Not particularly enjoyable, but serviceable as speedrun training, nonetheless.

Virtuous Western is very short and very easy. It sets up some vaguely interesting mechanics without ever doing anything challenging with them. If you want an easy way into speedrunning, this might be it; otherwise, steer well clear.