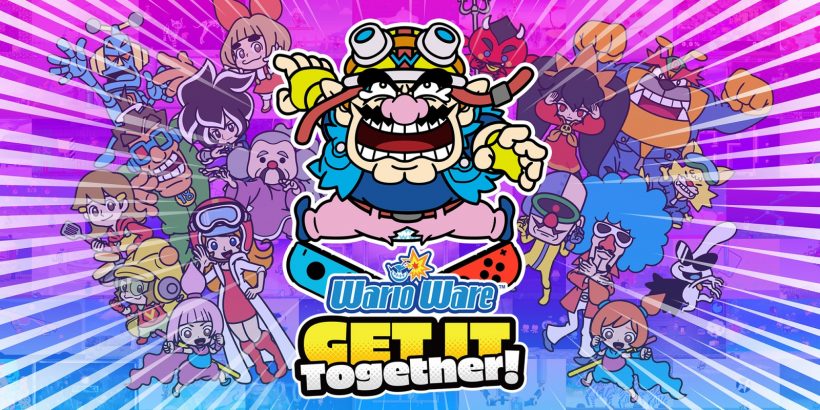 Wario is back in the spotlight on a Nintendo platform, in a title that’s packed with more microgames than you’ll ever be able to remember, alongside a cast of characters that still manages to feel fresh despite most of them having been around since the Game Boy Advance era. Get it Together! is not without its faults, but Wario’s first outing on the Switch is a return to the form we love him best in.

Too Many Hands Spoil the Game

You’ll start WarioWare: Get it Together! in story mode, which is a fantastic way to ease yourself back into the WarioWare formula. Wario and his friends have been making a game, but a few bugs in the code have caused it to come to life and suck them all in. Every level has been corrupted by a bug, and it’s down to the wide range of characters to clear them up and fix the game before release.

Each level represents a character and is segmented nicely away from the others. You’ll start with Wario and work your way through each level until you’ve found and collected every character. Well, most of them. Given that this is a WarioWare game, there is, of course, more for you to do once you’ve completed the game in the form of new, unlockable areas to tackle.

Levels are filled with microgames that you play through in the familiar WarioWare format. A microgame loads, you have a few seconds to work out what to do, and you need to complete it before the timer ends. These games are as mental as ever, seeing players remove towels from naked men, help swimmers reach an island, create a circuit for a lightbulb, and even save the world from tentacled nightmares.

The thing that sets this game apart from the rest of the series is how you play each microgame. Unlike the Game Boy Advance and Nintendo DS entries, in which you felt like the main character because you were twisting the console or tapping a screen to complete a microgame, in WarioWare: Get it Together! you’re playing as Wario and his friends. This feels like a double-edged sword that’s both beneficial to the overall experience and detrimental.

Each character has a unique ability that’s based on their personality. For example, Wario can fly around the screen and charge into objects with his elbow, 18-Volt can’t move, but he can shoot things with his boom box, and Dr. Crygor can swim around the screen. Outside of the truly unique characters, like 5-Volt, who has out-of-body experiences and teleports to her ghost (which you also control) at the touch of a button, most characters feel too similar.

Dr. Crygor, Wario, and Mike all play like the same character, as do Orbulon and Red. This is exacerbated by the fact that you need to choose multiple characters to take into each level of microgames as the story advances. In a way, it hurts the gameplay because you’re forced to swap between characters according to the game’s choice, not yours. In addition, it results in a lot of frustration when you come up against a game that you know another character in your roster would have been perfect for, but you couldn’t use.

As this WarioWare game’s gimmick, though, the multiple characters didn’t bother me as much as the fact that it doesn’t feel like you’re the one playing. Nintendo had the perfect opportunity to get players using the Switch’s unique features like the gyroscope and touchscreen. However, it does make the game perfectly playable across Switch and Switch Lite models, which is excellent.

Rush to a Slow Finish

The box for WarioWare: Get it Together! claims that there are over 200 microgames in the title, and it feels like it. I only saw a couple of microgames repeat throughout the story, and that’s because they had a more general theme as opposed to a character-based theme such as fitness, food, or retro Nintendo games.

The range in microgames is fantastic. The developers went wild with both the themes and each specific microgame, and the result is a frantic, explosive rush that feels great to play. The only time this isn’t true is when you struggle with the characters you’ve chosen to use for a particular level. I found that sticking with the same core characters in addition to the one locked in for a level was the best way to get to grips with the game in the end.

Something that sticks out in this entry more than any other WarioWare title is the speed of the microgames. They start fast and only get faster every five to eight that you complete. I failed so many microgames because the timer was too short to allow me to figure out what to do and complete them in time. One small mercy is that you’re handed thousands of coins for every level you complete, and you only need to spend 100 to continue if you lose all of your lives to soul-crushing microgame failure.

Conversely, the boss microgames give you as much time as you want to complete, within reason. The hazards within the microgame will grow closer and closer, but there’s no timer to stress you out so much that you frantically throw a character around the screen hoping that it will do something.

Additionally, these boss microgames are the most original and inventive in the entire game. They’re the culmination of everything else that’s thrown at you in the early levels, tasking you with carefully crushing grapes while avoiding spillages, exploring a hidden cave, and even defeating a tentacled horror. However, the aspect that defines them is that you can complete them just as easily as you can fail them, entirely through your own actions.

Unfortunately, the thing that defines the microgames in WarioWare: Get it Together! for me is a lack of polish. It feels very much like the mandate for this title was including more microgames than ever before, and that’s come with a cost to the quality in many of them. Of course, there have always been rubbish microgames in WarioWare titles, but I’d say they outweigh the good ones in Wario’s Switch debut.

There are exceptions to this, though. For example, 9-Volt’s classic Nintendo-themed level is something I could repeatedly play for days and never get bored of. If you grew up playing Nintendo, it’s the only level you’ll ever need. The game is pocketed with a few examples like this, and they’re definitely the saving grace that makes this something worth buying for your Switch.

An Embodiment of Wario’s Penny-Pinching Attitude

Outside of the microgames, which are definitely the bulk of what this game has to offer, there’s a lot to keep you coming back layered on top them. First, there’s the solid multiplayer mode that sees you play alongside someone else. You can use Joy-Cons to play simultaneously or take turns swapping the console to beat each other’s high scores (the only form of WarioWare multiplayer I acknowledge).

If you have a Nintendo Online subscription, you can compete in weekly tournaments and have your score added to a leaderboard. If nothing else, this is a good reason to maintain a high level of skill in the game so you can show off to all the other anonymous players online.

The main thing that will keep you coming back is the presents you can buy for each character to level them up. You buy these with the coins you earn from completing levels, either directly from a shop or through a gacha-like capsule system. Characters have a level cap, but you can then prestige them from that point, so there’s always something more to work towards.

Overall, this is the WarioWare game with the best longevity, giving you more to play for over the course of weeks and months than any other entry. This aspect, above all else, is what makes it worth playing. There are tons of microgames to get to grips with, and even if you’re dreadful at them, the game is still fun. There’s no skill gap to close, no hardcore mechanics to master, just good clean fun, and that’s something everyone can enjoy.

While perhaps sacrificing a little of the series’ identity, WarioWare: Get it Together! goes in a bold new direction on Switch that largely pays off. It’s great, clean, wacky fun.